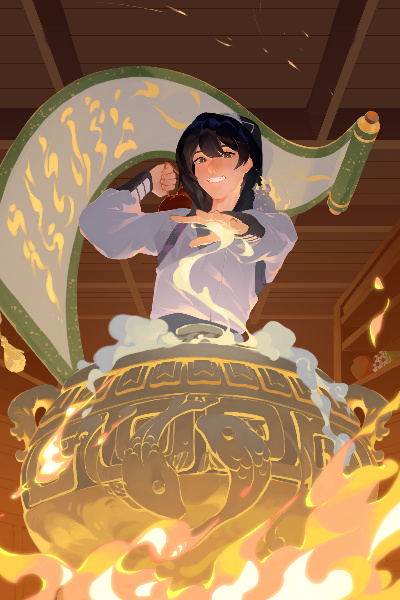 A shoutout to One Moo'r Plow! Where a guy who finds himself in the body of a Minotaur decides to start a farming empire instead. Check it out!

Who I was before doesn't matter. What does is that I woke up in the body of an eight-foot tall horned death machine.

This world is overrun by monsters, human greed, maniacs with levels and skills that let them sweep over cities with impunity. It's a power fantasy, and everyone else is the butt of a joke nobody gets and everyone dislikes.

In a world where I can be anything -and have a hefty headstart over anyone else-, I just want to be a farmer.

Plant some crops, raise whatever animals they have here, homestead and live a long, peaceful life.

Too bad everyone else has different ideas. 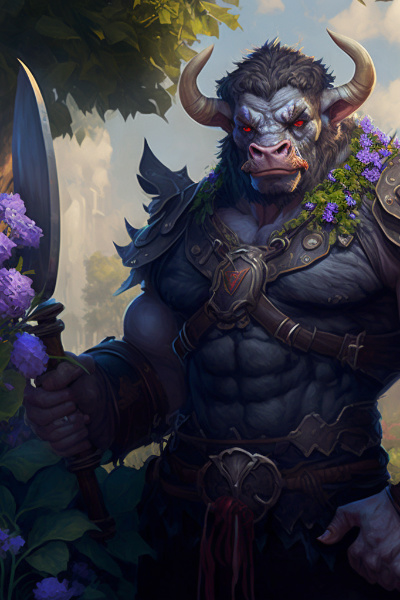 I waited as everyone gathered at the village head’s place, trying to compose everything that I needed to say. After the last person had joined, I closed the doors, before I began to address everyone.

“Without too long a startup, I’d just like to say to the village head that all us here think of this place as a home for us. And in parts bear some responsibility for events to have turned out the way they have. So if you would wish that we leave the village, then now would be the time to speak up,” I said, feeling more than a few glances looking at me in surprise.

The village head looked at me, taking a deep breath. “Lu Jie, to be truthful to you, there are people who have expressed such thoughts. They do not dare speak up, because despite how comforting and friendly all of you appear, it is hard to forget the difference between us, when we see you lift boulders with ease,” the village head said, and I tried not to sigh. I’d anticipated as much. Whispers carried on the wind far more than they realised, especially to a cultivator’s ears.

I sensed Su Lin about to say something, but sent him a pulse of Qi to keep him quiet.

“But,” the village head continued. “I would be ashamed to face my father after my death, if I let such a thing come to occur. Quirky a man though he had been, he’d found this place to be a welcoming home to any who arrived here and all of you are a part of this village as much as anyone else.”

I looked at the village, and saw the sincerity in the man’s eyes. Nodding, I glanced around at my friends, seated all around me, before I began to talk. “I have had a meeting with a Lord, which is where I’d disappeared to yesterday. We have come to an arrangement, where, I need to provide him with alchemy pills in enough amount,” I said, glancing around that table. “I’ve had the idea in mind for a while now, and to that end, I’ve been looking for ways to allow anyone to make the most simple pills there were. Even people who could not sense Qi whatsoever.”

Looks were exchanged around the table, varying expressions of raised eyebrows, but none of my friends looked terribly shocked to hear any of it. Perhaps desensitized, or perhaps it’s because they already knew what my goals were. Guo Zou on the other hand, seemed to have forgotten to breathe for a while. I did not wait for the man to recover and simply continued.

“I need the villagers' help to develop the tools to produce the pills in large amounts. We will be selling these for money and distributing these based on tasks across everyone involved in the process. Most of the villagers can continue to harvest spirit stones and spirit herbs as they always have, and we will compensate them properly for the tasks.”

I glanced towards the door of the chamber, my smile fading slightly as I sensed someone standing outside. A moment later, I figured out the identity of the person and sent a pulse of Chi carrying a message to them.

“You can come in, you know? There’s a ward on the door so you won’t be able to hear anything from the outside.”

I heard Yin stumble back in surprise, before she picked herself up and hesitantly opened the door. Her face was bright red at having been caught and I tried my best not to laugh at it.

“You have a terrible habit boy,” Granny Lang scolded me, and I ducked my head in embarrassment at her words. I could not deny my joy at surprising people with the things I did or planned.

Coughing, to retain some measure of seriousness in the conversation as Yin took a seat near her father.

Returning to that topic, I turned towards the village chief. “To that end, I want to pick three people who will be learning Alchemy under me, for the process of general alchemy, and granny, to ensure I don’t miss any basics.”

“I…” Guo Zou looked down at me. “Why would you entrust such a task to a man such as me?”

“Because you know the people of this village better than any of us do. And I need people I can trust. People who would be willing to abandon common sense and take up what tasks I’m giving out to them. I saw you handle the villagers, and they have your respect. Rightfully so. It’s why, this has to be done by you.”

Guo Zou looked down for a moment, thinking over something.

“I want to father,” Yin interrupted, looking at her father with a fierce expression. “I’ve wanted to learn so many things forever, but you’ve always protected me from everything. All the more so since mother died. I know these aren’t womanly skills and you worry for me but… I wish to learn how to do this. I wish to learn from the libraries, read books, and become someone of worth. Not someone who has to rely on others.”

I looked at Yin, feeling more than a little surprised. That was… not an attitude I would’ve expected from the girl. “I take back my words, village head. You only need to pick two,” I said, glancing at Yin, as I smiled. “I have my first candidate selected.”

The village head looked at his daughter before looking at me. Taking a deep breath, he spoke. “Since my daughter insists. I ask of you to take care of her, and accept the task with honour.”

I smiled, nodding. “Zhang, pick three villagers to train in combat. We will be clearing out the Qi vein to establish a production base inside. It’s the ideal location and will help keep the work hidden as well.”

“Granny Lang, I’ll share the methods for the pills when they’re complete. I’ll need your help with the development process of course, and to supervise the production to make sure things are working fine.”

Granny Lang snorted. “What’d you do without me boy?” she said, and I flashed a smile back at the old woman. I turned to look at Yan Yun.

“Yan Yun, I will need your help to guide the trainees through the basics of combat. You’re the only one here who’s received a proper education in such matters,” I said.

After a moment of consideration, Yan Yun nodded. “I’d be happy to.”

“Su Lin, your job is the same. Scout the market, make sure Silver Fang is not hounding our tail, and find a way to sell and distribute the pills” I said, before taking a glance around the chamber.

“Here’s to hoping for a new start,” I said to the room, feeling a storm of emotions stirring up in my gut.

Many faces looked back at me, some with respect, others with worry, and a few with anticipation. One way or another, the dream that I’d seen upon waking up; of a world of magic so rich and advanced was starting to take shape.

Help me pay for college and read 1 month ahead on Patreon!