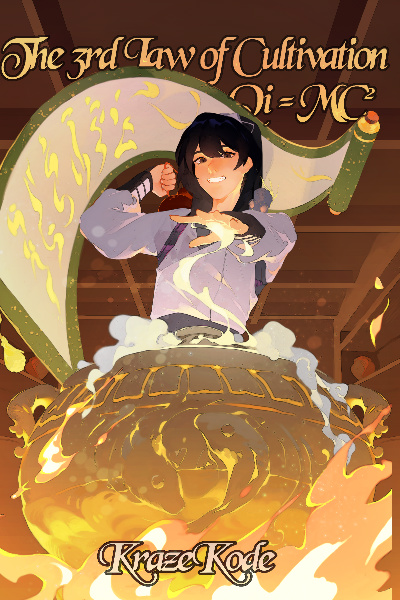 I'm lateee! Ending chapters are tough. Book 1 is close to ending on Patreon. If you'd like to read ahead, you can do so here. I'll be taking one (possibly two) weeks off when the book 1 ends, to take a breather and outline the rest of it before I begin again.

I chased after the beast, rushing through the misty woods. The owlbear slipped through the trees, shifting and contorting as it moved at high speeds. I cursed as the mist began to become denser and denser the further I ran, and soon I ditched the torch in my hand, throwing it aside, to chase after the beast with all I had.

Wind whirled around my feet as I poured Qi into them, using Wind Step. I kicked off the ground as hard as I could, fire rising at my fingertips that I shot forward. The owl bear didn’t glance back, merely twirling through the air as it dodged the blast of flame. It took all my attention to prevent myself from losing the misty creature through the dense foliage and mist as it was.

“Chii!” I heard Twilight shout, as I tried to keep track of the beast through my bond to her.

Kicking off a tree branch, I dug into my pocket and took out a drugnade. I couldn’t throw it at the beast directly, in case I would hurt Twilight, but I could startle it and slow it down. Winding up I lifted the drugnade and threw the explosive with all I had. The drugnade shot through the forest, tearing through trees as I detonated it near the creature. A tremor shook the ground, as a whirlwind of fire parted the mist for a moment. I wondered if I’d gotten the creature, but a resounding cry with spread out wings dashed my hopes as the owlbear began to make true of the owl part of its name and flew through the sky.

At this point, I wasn't even sure if it was an owlbear, but there would be time later to worry over that.

Digging through my pouch, I began to toss drug-nades behind the creature, exploding them. My plan worked as I slowly but surely began to gain ground onto the running beast. But before I could catch up to the monster and free Twilight, the path ahead suddenly ended, interrupted by a massive cliff rising up from the ground. I watched the creature disperse into mist as it flew into a crack within the area, dragging Twilight with it.

“Stop!” I shouted, chasing after the monster, and into the dark cavern. My steps halted when I found myself standing in front of a massive gate. I froze for a moment, before rushing up to the gates to push them open.

A groaning sound came as I pressed the gates to try and get them to budge, but no matter how hard I tried I could not make the gates move. My panic only further began to increase when I stopped being able to sense Twilight, and I poured every drop of Qi I had to try and get the gate to move.

“Lu Jie!” The shout broke me out of my struggle, as I turned back to face Liuxiang. “Did you get the beast?” he asked, looking around in concern.

“No,” I replied, clenching my fist as I turned back to look at the gate stopping me in my path. “It went in there, Twilight’s still with it,” I replied.

I had not felt this sense of frustration in a long time. The helplessness caused by my own inabilities. Never before, had I wished to be like the average murder minded main character, if only to have had the strength right now to protect my spirits. The closest things to family I had in this world.

“You’re angry and it’s making you blind. Calm down Lu Jie, and breathe,” he said, his eyes steady and meeting my own.

For a moment, I wanted to swat away his arm and pull out my Gu-nuke anyway, but I let the emotion go. Nodding, I let out a breath I had no idea I had been holding. “She’ll be okay. The monster could’ve hurt her all along but it didn’t. She should be fine,” I said out loud, more to console myself than anything else.

“Labby will not let Junior Sister Twilight get hurt, she promises!”

I smiled at Labby’s words, petting her head, before I turned to face Liuxiang. “Thank you. I was being stupid.”

The boy nodded, before turning towards the gates. “Let’s focus on the gate. From what this one can tell, the gates here are where our path would’ve taken us as well. The path we took was a lot faster, whereas our trail was subtly curving around all over to take us through the forest.”

I looked behind me for a moment before turning back. “So we skipped a bunch of the trials. But how does that help us open the gates?” I asked, glancing at Liuxiang.

“There are file torches set around the arena. Perhaps the gate opens if they are lit?” Liuxiang said.

I glanced at the little torches embedded in the wall, before nodding. Letting Qi gather at my palms I shot a wave of fire at the torch. The flame lit up for a moment, before flickering out of existence. I tried once more, going through all the torches a few times and saw the same thing.

“Seems to be something else,” I said out loud.

“This one can see something scrubbed out on the gate,” Liuxiang said, walking closer. “Most of it is unreadable… but one line is visible. ‘The Meek tread the walking path, the strong forge their own.”

I hummed over the words, trying not to let my impatience make me panic. I needed to solve this, if I wanted to find Twilight, and rushing was pointless.

“Perhaps it’s talking about the path we took. Was there something outside the path that could be the answer?” Liuxiang asked.

My gaze drifted towards the flowers I’d picked up. Taking one out, I showed it to Liuxiang. “I’d picked this up with Twilight. She’d sensed these and ran towards them when the monster came and snatched her up.”

Liuxiang frowned, looking at the flower. “Try placing one in the torch.”

I nodded, walking over to the torch. Taking out one flower, I put it into the torch. With a spark, the flower erupted in flames, lighting up.

Feeling my heart race, I walked up to the other torches and began tried once more, but this time, the torches showed no reaction. I moved to the next, and the next, but none lit up after the first one.

“Perhaps there are multiple herbs like this outside, and we need different ones to light up the flames,” Liuxiang muttered out loud.

“Perhaps,” I said out loud, thinking over something. A moment later, I grabbed one of the spirit herb treasures I’d gained and put it in one of the torches. It lit up with a blazing fire, starting another flame.

I looked back at Liuxiang, meeting his eyes with my own. I wasn’t sure if the flowers counted as treasure, and if I burned four of mine, I had little chances of winning after that.

I took in a deep breath, before smiling. “I’m an idiot, but just this once, the right kind of idiot.” I walked to the torches, placing the rest of my spirit treasures into them. I felt a slight pang of regret at lowering my chances to win substantially, but there was no way I was going to leave Twilight in there.

One after the other the flames lit up from the torches, illuminating the dark cavern chamber with much needed light. Qi gathered around the gate, as a groaning noise resounded out. With a cloud of dust, the gates slid open, and I looked into the dark chamber awaiting me on the inside.

“Let’s go,” I said, glancing towards Liuxiang beside me. With a nod, he followed as we stepped beyond the massive gates, and into the dark chamber inside.

Wait for me, Twilight. I’ll be there soon.

The door closed shut behind us with a loud clang, and a moment later, the darkness swallowed me whole.

Please vote for the story on TopWebFic!