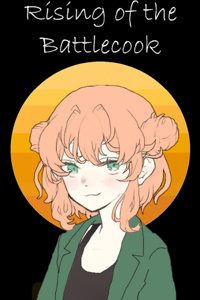 Breaking forth for air, she woke up.

She was in her room, lying on her sweet scenting bed. The sudden change in scenery caught her off guard and as such, she sat there in silence, watching the sunshine come through the window.

She put one hand on one eye, then on the other. Both her eyes were fine. She felt happy and confused, but most importantly, tired. Lying back, she grabbed her phone from the nightstand and went online.

– Katsumi, we have guests! Come down!

Her wardrobe was plastered with drawings and posters. She had a soft spot for horror. Lovecraft, Stephen King and Edgar Allan Poe, although the latter one she never read just had a caricature of.

Most of her clothes were average, not bearing any uniqueness, except her favorite hoodie. It was an exceptionally girly pink, but that wasn't the reason she liked it so much. The front side had a cute bunny hanging from a rope with 'x' eyes and the hood had two large bunny ears facing upwards.

Putting it on with black leggings, she approached the door and felt as if something was off. Her room looked like it does on any other day. Her hoodie was warm and cozy. She shrugged it off and left the room, going for the stairs. A conversation could be heard from there.

– Such a pleasant surprise! I'm quite honored to have you as guest!

– Please, take a seat! I'll bring you cookies and milk.

– Who's there, Ma'? Santa came early? – Katsumi came down to see the guest's face and stopped midway on the stairs.

She spoke no words, just gazed with empty eyes. An awful sadness pierced her heart at the sight of the green royal mantle. Looking down at her palms, those empty palms, her doubts were confirmed.

– Welcome, Katsumi. – the guest was Esidezhu, their body occupying both sides of the couch.

– What are you doing here? What is this? Where am I?

– Get off the couch! – she put both hands on the green mantle and pushed the fallen god with all her might. – Come on now, you fatty!

– I'm not here to ruin your sleep.

– You're doing pretty bad then!

Her grandmother walked out of the kitchen with cookies and milk in hand. Her grey hair was in a bun and the beige dress she wore stretched against her overweight body.

– Katsumi! Act nice around the guest!

– We raised you better than this, young girl!

The living and dining room were connected. Their only income was the small pension Katsumi's grandmother got and as such, they hadn't the luxury to buy a big house. The place they rented had five room and two of them were bedrooms upstairs. As such, they ate on one of the two couches while watching the news on a small black television.

The two females sat on the couch facing Esidezhu. Between them was a small table, where the old woman put the milk and her homemade sugar cookies. They were filled with marmalade and had a heart-shape on top.

– Let's see what's on the news! – the woman turned on the television, displaying an average looking man talk about everyday stuff.

– Let her, it's better she hears not. – Esidezhu took a sip of their milk.

– If this is a dream, that means I survived. That's… cool I guess.

– I came to give you orders.

– At least fake a little joy that I'm alive!

– We have no time to celebrate. My interference in your battle only set us back. Enemies are fast approaching.

– Stay alive long enough and you'll find out more than you wish to.

– Was that guy in the forest one of them?

Esidezhu fell silent for a moment. They didn't eat or drink.

– What I know is that fierce enemies are fast approaching. One, their leader, is exceptionally powerful. Not by fighting standards, but rather status-wise.

– Survive. – they leaned forward, the head from the cage looking straight down on her. – Your original task was to level up. Gain experience. Both in combat and outside that. I wasn't prepared for them to find us this early. Then again, the sooner you meet our opponent, the more you can prepare with a face in your mind.

– Do I have to kill someone?

– No. Your task is much simpler than that. Currently just to survive.

– What if I grab Aeren and escape?

– You took liking of the little drow, I see. Unfortunately, escape is not an option.

– Okay. – she lay back in the couch, letting out a huge sigh then gazing at the ceiling. – You know, things are starting to catch up to me and I feel so confused and tired. I wasn't prepared for any of this. I'm an introvert, which means I'm not good with other people and I need my me-time. If I'm away from my room for more than two days, my skin starts itching and I go into this exhausted state. You chose the wrong person, Esidezhu.

– I made my decision based on potential and that alone.

– You fought well in the forest.

– It wasn't my true self! Things just happened so quickly, nothing felt real and I didn't think about the possibility of death…

– Either way, you did fine. Now, the outside world is slowly becoming one with nothingness. Your dream is about to end. It's time to say my goodbyes.

– I won't appear again until the threat is dealt with. Good luck, Momo Katsumi. I have strong faith in you.

She tried to reach them, but their body slowly dispersed as white nothingness engulfed her vision. The world became empty as strange noises could be heard. It was that of the outside. Birds chirping. Kids laughing. The sounds of waking up.

Can you lucid dream?
Previous Chapter Fiction Index Next Chapter
About the author