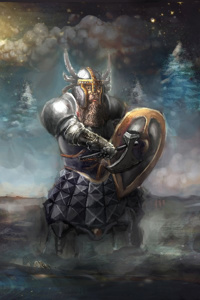 Meet Peter ‘Horn’ Kowalsky – The champion! The prodigy! The winner of the ToN master league in 2032!

Peter played games his whole life, finally reaching the top. In the final tournament in a worldwide RTS-RPG blockbuster, he won the Global event. His victory secured him a spot in the pre-release of a new game, Dawn of the Nexus. THE VRMMORPG-RTS masterpiece that the whole world was waiting for.

Join him on his journey into a new unexplored world, a realm which the pre-release players will build up from scratch. Leading his clan of dwarven warriors and crafters, he has limited time to prepare before the wave of players will change everything.

He'll need trusted champions and allies, as the danger and competition will be close by. It will be the actual test of his determination, cunning, and planning skills and a lot of sweat and virtual blood. Will he find himself in the new world? Will he again reach the top? Will it even be worth it?

- Battles, both small and large

And if you dislike:

- The chosen one cliché

- Grand quest to save the universe

Then you'll find yourself at home. I hope you'll enjoy the read!

PS. The true base-building won't start for a while. It will become the main focus of the story, but the introduction into a new world will take a while. Bits and pieces of it will appear from the beginning, but most of the gritty stuff won't come for the first twenty, thirty chapters.

Too dissonance inducing to suspend disbelief

While nothing negative stands out asode from the repeated kicks into my suspension of disbellief aside from a few minor typos, that alone has precluded me from continuing. The MC, a supposed world champion of an RTS game, simply does nothing like a pro or even competent player. They don't bother reading over a significant portion of information given to them. They only notice utterly blatant hints when mentioned by randoms. They don't even check the effects and cooldowns of their own damn abilities. Then they're offended by a massive macro gain in a unit choice from their champion. It's utter incompetence from a supposed world champion.

It's like the author has a delusion that pro players play games in a way remotely similar to the average person. Every SCII pro player can tell you exactly how many hits a zealot/zergling/stalker can take from eachother at different upgrade levels before dying. A good portion will even know the numbers for each of those and more. While there are players who stick with instinct, they can still answer that just without knowing the exact amounts.

While it may improve over time, it bothers me in the same way something trying to be hard scifi and constantly aspulling magical technology does. It's just  constant disconnect between what is stated and what is shown. I just can't trust that any of the following world building will be anything but retort inducing.

Dawn of the Nexus is a base-building LITRPG that caught my eye when I first saw the story start to post. The title promised a lot of what I look for in the stories that I enjoy. But, I just didn't have the time to read it until recently.

Now that I have read some, I'm glad I picked it up. This story is everything the title promised and more.  It really is good stuff, and I'm anticipating it will continue to be.

Style Score: This story is told in third person past tense. It allows the reader to follow along with Horn on his latest journey and does so well.  The action scenes are exciting, and the base building is well thought out.  It's very immersive and I read through 20 chapters in one sitting. I would give it a complete five stars, but there were one or two instances of POV shifts that appeared at random which caused me to lose immersion.

Story Score: The story so far is engaging. The premise is spectacular and the plotline hasn't had any major plot holes. I am thoroughly enjoying the story so far.

That being said, there are some nit-picky things that I felt were holding the story back. I felt that the choice of race and style of gameplay the MC uses felt a little too generic. However, I do realize that's a matter of personal taste.

Grammar Score: Grammatically, I saw very few typos. Fewer even than the ones in my own work. The story was immersive enough that I didn't bother to slow down and add them to the suggested edits. But, having seen them, I felt I couldn't give the full five stars in this category. Likely this is something that'll be fixed by the author over time and not be noticeable in the future.

Character Score: I didn't have any problems with the charactizations in the story. Each character spoke with their own voice during dialogue scenes, and I  had no problem differentiating between who was who. A minor nitpick would be that the main character, Horn, felt a little bland. However I do realize that it's early on in the story and there will likely be many more opportunities for character development.

I enjoyed it -- I think that if you like LITRPG action and base-building, you will too!

I really good start with some solid world building. the clan building has been fun and it feels like its gearing up to get into the real meat of kingdom/settlement managment.

im not sure how much of a fan I am of the VR/deepdive premise but honestly havent seen anything about it since the setup preamble.

Reviewed at: Chapter 9 - Good goblin is a dead goblin.

This is decent start of a new series. I am looking forward future chapters.

There have been a few misspellings and ocationally the syntax could be better, but I have not yet met anyone speaking proper English so there is that.

I am curious how this author will develop the mechanics and further world building.

The premiss of the story is a future video game with full immersion with a 1 party view.

Horn tries to build up his clan and make it truly worthy of his name and worthy of the status of dwarfen war mashinery and dwarfen holds.

The story has great potential as the characters although so far only npc's have deep emotions and story's behind them wich sets a great stage for the future build up of clan and characters. There are sadly not enough good base building novels out there and this one ticks all the boxes. No overpowered Mc and no grand quest to save the world while you exoust and smash your clan to shit to get to that grand goal. I am looking at you goblin tale. Admittedly we only start now to see the "real" world and start to set the base up and get the clan running, but characters a well thought out and bring this sorry to life. I am really excited about how horn will start to develop his clan and just hope he won't be sandwiched between to much ork and Oger clans. Dwarfs for the win xD

I will keep an eye on the story and find that it has great potential to get us a huge story with interesting characters, self made plot and deep characters and most important of all progress.

It's a good kingdom builder

As of chapter 11 its good

Have yet to get to the nitty gritty of it but it looks like a kingdom builder (from the ground up). And God I love that shit.

Pro gamer plays deepdiveVR 6days in needs 1 day out. The time dilation is a 2:1 ratio so the 6 days are 12 in game

If you like the first 5 chapters it's for you if not it isn't.

Honestly some of the best writing I've ever seen on this sight with great pacing in my eyes. Also at the most up to date current chapter 19 is a massive cliff hanger that made me scream for more. I'm excited to see whether or not we meet the Orcs again.

The story is of the Kingdom building variety in a VR game. As of this chapter the tutorial is still ongoing, but has shown a very promising start with glimpses at how the main kingdom building functions will look in the future.

I binge read the released chapters, they are very well written. Characters have depth and there has been substantial signs of fleshed out character development. It is overall a very promising start which seems to be built on a solidly planned foundation.

My only worry, as with several similar stories I've read in the past, is that they are unable to keep momentum after the tutorial and are dropped. Many even failing to finish the tutorial. I however have high hopes for this one, the choice of keeping the tutorial relatively short I think is a good one with the focus having stayed on preparing for the game after the tutorial.

If the author reads this, keep up the excellent writing! Not familiar with how you go about your worldbuilding and plan your story but I would encourage to plan far in advance rather than improvise. I've seen numerous stories felled by improvised features later having knock-on effects that created unsustainable plot holes. Your writing is excellent so you may already be familiar with all this, but it is an easy trap to fall in so I just thought I'd leave a word of warning. Enjoying the story and best of luck in further writing.

Quite well done so far and I'm hooked. Good action, good worldbuilding, good use of stats, great pace, fun unique elements, and only a few errors here and there (many rectified by the author if you point them out).

Not a ton of base building yet but it's there. Good twists and fairly realistic in the plot and decision making. Absolutely worth a read.

Characters (1/10) : All characters are terrible especially the MC (who is also the narator). He is VERY stupid, inpulsive, arrogant and an asshole without any redeeming qualities. Worse he is extremely unlikable while the author expect you to identify to him.

Style (6/10) : Decent except you shouldn't make your MC use slurs unless you want to make him even more unlikable.