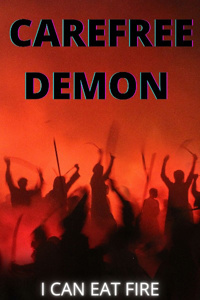 I CAN EAT FIRE

The entire Daybreaker tribe was in a frenzy recently. The legendary totem warrior Ar hu was named as the next tribe chieftain. Due to his immense popularity, the entire tribe was busily making preparations for his 'coronation ceremony.

Meanwhile Ar hu was in a trance state as he sat meditating near the totem temple. He suddenly felt as if he was walking in murky darkness. The strange thing was that there was no wind nor air on where he was standing.

Suddenly the surroundings changed and he felt as if armageddon had appeared. He subconsciously knew that the thing acting on him was the world's will.

Feeling death coming his way his heart jolted. But before he could move an inch.

He just saw a bright light shining onto his face and felt as if the entire sky turned upside down.

The last thing he saw was a frail young man holding two clubs in his hands looking calmly at him and said just one sentence, "To break the sky one must reach the sky."

As Ar hu opened his eyes his surroundings seemed to have changed but he knew from now on nothing would stay the same.

"One day my tribe would pierce the skies open!" Ar hu seemed to be completely obsessed with this.

He paid his respects to the totem for three more nights before coming out of the temple as a changed man.

Many years later a beautiful woman was sitting in a secret chamber and there were dense lights surrounding her.

After some time the lights faded and many strange phenomena appeared all around the sky and shaped in the form of a silver eagle. This happened only when someone broke through to the emergence realm

The occurring phenomena resonated with the path one walked.

The entire tribe was in a huge uproar after seeing these phenomena. It indicated that the tribe had one more emergence powerhouse.

In the secret room, another emergence-level aura suddenly appeared. It was a mature woman in a gorgeous dress.

"Little Awá congratulations! You have reached a major milestone in your path." the lady felt immensely proud of her daughter.

"Thank you, dear mother. Can we now go and accompany father? I think it is time." Awá was no longer timid or nervous. She carried a confident look on her face.

But the gorgeous woman was very nervous, "All these years your father spent countless time and has made countless enemies for this particular day! So it should be done correctly."

"Today is the day your father will split open the sky!"

They went down dim stairs down and reached a secret platform underneath the sacred totem temple.

The platform had a dozen people including Ar hu and the old tribe chief who now to their surprise looked young and robust!

The other ten were the ten sacred warriors of the tribe.

"Haha don't be so surprised this feature of mine is only temporary. After this task, I will pass away so I wanted to fade away in my full glory!" the old man seemed determined.

As Awá turned to her father she trembled with grief. Her eyes grew moist and her confident exterior shattered. She still remembered the days her father took her around like a princess and how much he doted on her.

She lived an extremely fulfilling life with her ever-loving mother and the pillar of support, her father.

But it all shattered after her father became the tribe leader. He was always engrossed in the tribe's affairs or training. Causing them to drift apart and as she grew up she was attached to her mother.

She still received all of the best resources and opportunities which enabled her to break through to the emergence realm. After spending so little time together her image of her father shattered and she had many grievances against him.

Ar hu turned towards her and with a slight smile he commented, "Little Awá congrats on breaking through but lets al-"

A tremor suddenly swept the entire daybreaker tribe. Many buildings and structures crashed down to the ground and several vast pressures descended onto the tribe.

There was a vast ocean of myriad colors up in the sky. There were three colors among them that stood out. It was three large waves of green, dark blue, and yellow.

The ancient platform in the center of the tribe soared into the air and formed a cage protecting the entire tribe.

One of the experts among the day breaker tribe screeched after seeing the scene in front of them.

"Impossible! Those three are not supposed to appear here." he pointed his finger at the three vast colors in front of them."

The vast colors lighting up the sky were actually a people!

" The yellow-robed beast tamer tribe, the cult of the sky angel and most importantly one of the top grade tribes of the entire central continent-"The Ferocious Goblin tribe"

There were many reasons why goblins had become so dominant. Goblins had a vast population that was many times larger than average tribes.

Moreover, goblins had a natural affinity with the darkness element. With several generations of goblins, they rose up and became a top race.

Suddenly the entire space shook and three silhouettes were vaguely seen. Each of the three people released absolutely no pressure.

But everyone here knew their identities.

The vast ocean of armies in the skies kneeled at the same time. These three people were actually unity realm powerhouses!

Ar hu's expression was grave and he clenched his fists and said with a trembling voice, "Is this necessary!"

The man leading the three was a dark green goblin. He stood 6 meters tall and his eyes revealed and he had pitch-black eyes.

He had a calm expression but he was in fact stronger than the other two.

"Chieftain of the daybreaker tribe Ar hu, I sentence you to death for the many crimes you have committed in all of these years and trying to endanger the world in your pitiful experiments!"

Ar hu suddenly laughed before he lunged at them with an almighty strike that managed to blow them a step back.

"You are not the only one in the 'unity ' stage! It's also good that you came here on you're own accord. I needed some goblin heads and other sacrifices to commemorate the moment I split open the sky!

I CAN EAT FIRE