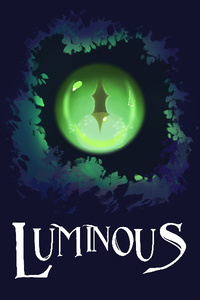 Peasant girl Meya Hild is offered the chance of a lifetime to become a Lady---at swordpoint. By mercenaries. Engaged to a dying nobleman. Poisoned with one month to live. Tasked to loot a castle. In a kingdom running out of resources.

Little did Meya know that this shenanigan would lead her across land and over seas, from a mountain made of sapphire to an island shrouded in silver spiral clouds, with masquerades, heists, kidnappings, assassinations, shipwrecks, alchemy, reading lessons, romance, and an unexpected bump along the way.

Luminous has received a MANGA adaptation! Subscribe and read the first chapter FREE before the official release!

💖DO: Follow LUMINOUS so you don't miss any updates!

💖DO: If you enjoyed Meya's adventure, spread the word!

💖DO: Join the Luminous community on Discord!
Don't miss the latest developments on the upcoming LUMINOUS: THE GRAPHIC NOVEL!

Copyright© 2020 Anchisa Utjapimuk (jeidafei) All rights reserved. No portion of this book may be reproduced in any form without permission from the publisher, except as permitted by U.S. copyright law.

Reviewed at: 10 - Dining with the Family

Luminous is a very-well executed piece of fiction.  At bottom, the story is about a "greeneye" peasant girl in a medieval society who ends up impersonating a young noblewoman on her wedding day.  Sharp of mind and even sharper of tongue, our protagonist comically gets herself into trouble at every turn.  And yet under the cheerful and cheeky personage, we get a glimpse at a young girl hurting from a lifetime of otherness.

The author does a great job piecing this together.  The characters come across as very well formed and distinctive, even the side characters who we see for only a chapter or two.  The plot mostly makes sense going forward.  And the worldbuilding is fairly good, if standard with a twist.  Not a complaint about grammar.  And I foung myself guffawing more often than I expected.  I may have a few nits to pick about the plot or worldbuilding, but objectively it's very, very well-executed.

To be clear, the story is interesting and I am enjoying it, but I think this author and this story could be absolutely great so I am going to point out some issues with the story telling.

First the good: the grammar is good and the style isn't bad. The multiple POV showing each person's secretes and feelings makes things interesting as we see conflicting desires and motives.

The ok: the world building is alright, but lacks consistent details like consistent accents, traits, or opinions. The characters can each have varried and deep emotions, but they often feel over the top or change too quickly making them less impactful.

Example is when Cayden looses the dog we just barely met and becomes a mess.. I am sorry, if felt dumb when putting it agaist the mask he normally wears of cold calculation. Then he gets over it quickly.

The problems:  the two biggest issues are the POV problem (keeping the knowledge and personalities seperate) and the time skips for conversations they needed to have had for us to understand.

Examples for this were when Meya's secret was found out both times. (Yes we find out they knew earlier, but there needs to be a confersation they have so we get to confirm what each party knows so we can follow it. The note on the dog should have raised some questions atleast but they just accept it.)

This also makes the secrets they have feel less impactful when they are found out and very few people even seem frazzeled. It is also implied that even if Meya was found out she might be rewarded. Same issue when Cayden founf out about his brother's desire for his original fiancee.

Finally their personalities seem to blend and change. Sometimes Meya is strong and smart, sometimes she is clumsy, sometimes depressed... I would normally thing of this as good emotions, but every character is like this so it feels like they all are the same.

Finally the story seems to have some mysteries that feel like plot holes as characters are learning about their past.

Making a bigger deal about loosing memory or have them acknowledge memory blanks would make it feel less jarring.

Surprising twists hidden behind the obvious ones

So I would recommend this story if you are into fantasy romance novels. It is heavy on the romance. The story does a good job keeping you on your toes by hiding the bigger twists in the shadows of the obvious twists. Has good pacing overall, which is something I know a lot of RR stories, even the popular ones, struggle with.

The one thing I did struggle with was Meya, but she does experience a lot of character growth overtime. For most of the story, she had been selfish and even hypocritical at times, which is why it was very welcome that in the later chapters some serious self-reflection occurred after other characters called her out on her bs