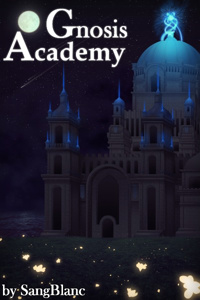 'Gnosis Academy' updates every day,  Monday to Friday. All chapters, locked and unlocked can be found on the main website.
Join us on Discord.

On one hand, we have Michael.
On the other... we have an entire new world. You could probably tell how this is about to go just from that.

This is a LitRPG adventure, when one young man from Earth finds himself in an entirely new environment, complete with Classes, Skills and Magic.

That being said, welcome to the Gnosis Academy. The best place to learn magic in the whole, wide world. That's also a small world unto itself, given weird spatial magic shenanigans. Go figure.

This is the place where our young hero has been transported to, very much against his will. This is also where he must decide what to do going forward. Should he focus on doing everything in his power to get back home? Should he learn as much magic as he can? Should he make powerful friends and climb atop the Gnosis social hierarchy?

Should he go for broke and try for all three?
That's what you're here to find out.

Follow Michael as he juggles with classes, tries to avoid becoming the teacher's pet, plays different factions against each other and more.
Hot elves may or not be included.

Enjoy the story everyone and please leave a Rate and a Follow!

Good, but could be better

Reviewed at: Chapter 15 - Guts and Glory

My opinion as of chapter 15:

Pros: -Has an interesting premise
-Has entertaining characters

-The MC is neither perfect or annoyingly incompetent

Cons:-The delivery of information is a bit confusing and sometimes vague

-For a LITRPG the "power system" is pretty vague, both the "game" aspects and the magical ones

If you are looking for a chill slice-of-life/school-life story set in a wacky magic school then give this one a try.

Good grammer and no spelling mistakes I could see. Style feels casual.

Michael is a good viewpoint for the story. He has a background in academia. I found it interesting as he compares his experiences in university with the realities of a magic school.

Characters aren't deep, per se, but they are memorable. Side characters are introduced at a nice pace and are distinct enough in personality and apperance to make for easy reading.

As of this moment only 11 chapters have been released. SangBlanc has set up the world and characters for some interesting things. I am excited to see where it goes.

I love the premise and while I do not exactly love the issues with Erea, it was still well written and carried out well. I can not wait to see how the adventures and encounters unfold as the story goes on along with the future development of characters from their already so far developed ones.

It's a nice story, everything is good for me. Flow, story, characters. There are a few typos but they are not that disturbing.

Maybe a bit more detail about the spells / magic system  would be nice.

So far it is an engaging isekai story. I would recommend to read, you can decide from the first few chapters is you want to continue to read.

Don't know how to make them, but it's not like I care that much anyway. This here was a story good enough for the 20 minutes I spent reading it by a coffee table. Kept me engaged, interested, and deep into a world which I hope took a long time to make. POV felt weird at a few points but not enough to make me step away from the perspectives in general.

So glad I've found this story.

It starts of like a normal LitRPG, with portal tropes, the hero being dragged off to a whole new world. But it grows. Oh it grows.

We find out that Michael, this college student & history major, has just been pulled into a self-contained world, all of it centered around a magical academy. And if magic and magical learning isn't enough for you, he also gets to have Classes and Skills.

Now, this may still sound normal to you, but the tone of the story is what makes it all tick. You see it all through either his lens or the narrator's and you get to see this ever expanding world, characters appearing left and right, the academy itself revealing itself in front of you.

You may be wondering what's with the title of my review. That's my vote!

Currently, at the chapter I'm at, Michael has to pick between three factions. One doesn't matter, one has a pretty, blonde elf and one has an old, wise elf. In case it wasn't clear, I vote for the WISE ELF!

Story wise, the pacing is good. Grammar is decent. I do see some errors, but most of them are typos. Others have pointed this out too, but at least the author is really prompt with fixing his mistakes.

The characters have depth and they sound fleshed out. The plot seems whimsical, but gradually comes into focus more and more.

It's still starting, so I hope I'm not wrong, but I think I may have found the story of the year right here.

The only way is up.

Fantasy novels have always been a favourite of mine, I  love the experience of reading about na world that doesn't exist and the people therein. How they overcome challenges, but also in learning what makes them special.

Gnois Academy has taken the tride and true setting of a school to introduce us to Michael and his band of misfits. Most of the story is revealed through Michaels interactions with his friends and other side characters. To that end, the narrative is very good dialogue and there are no long stretches of soliloquies that plague some stories here.

For now, the magic system is interesting if not yet completely revealed in how it functions. The joy is that as the Main Character learns, so do we.

Ultimately, at this stage the story is fun to read. I don't want to go into minor errors , because they truly don't impact the story significantly.

There are many writers who write stories here that read as if they write for themselves. However, the author has written a story to be read and enjoyed.

There's nothing terribly frustrating, there are no inconsistencies with the rules of the world, the characters are consistent with their personalities. Personalities that are distinct and colourful.

If you're a fan of fantasy, give this story a try, I truly believe the author has the talent such that this can only get better from here.

Hogw*rts?  No.  Floozies?  Possibly.  Pretty elf?  Check-ish.  She cray-cray.  You know the saying about that, but it's more about finding your brand of crazy anyway.  Magic?  Metric butt load.  Also a few hog's heads on the same delivery docket.

Story?  Something close enough.  Errors? Yeah, may bee could ben e-fit from a runing and sin tax chequer.  The comments section is a good spot to help out with that.

This is a well told tale solidly within the tropes of the genre without descending into cliche hack work.

A basic fun read. Royal Road wants me to pad the darn thing up to fifty words. Doesn't Royal Road understand that "brevity is the soul of wit?"

Apparently not. Perhaps they are trying to discourage all but the most pedantic sorts from issuing an opinion. Fear not Royal Road. I will keep my observations to myself henceforth.

Story is okay, seems like a classic LitRPG with the clichés that come with. Which isn’t a bad thing, it is enjoyable enough and the characters aren’t shallow robots. At least the ones we get to see more often.

The only thing about the story itself that I really don’t like is how they scream their spell’s names when casting them. They can whisper them apparently but you know... Especially when it is established that it’s bad form to tell others you don’t trust all your spells or skills. Yet they say them to use them... That and them cringy incantations in other stories are the  tropes of fantasy spellcasters I really despise.

But omg is it in need of editing. Spell names that change from one chapter to the next. Missing or extra pronouns. Wrong homophones and even some that aren’t homophones at all but just are written similarly. Some instances of verb tenses changing mid sentence too. A bunch of typos as well. It’s almost unbearable. Almost... And they are all such simple mistakes. Like “it” instead of “in” for example. Simply reading through your own chapter once done could easily catch all those typos and what I am positive is autocorrect acting up.