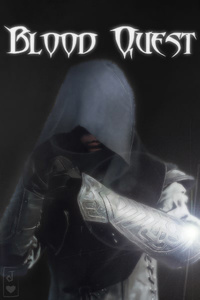 Leon's family has been diagnosed with a new type of incurable blood disease. It's an absolute death sentence and when it turns aggressive, you only have a few more years of painful life left to live. His mother has just begun the last years of the disease when a person supposedly comes back from death with supernatural abilities. He talks about a choice you get after death--get an extra chance to come back to life, or die.

Even with Leon's diminishing life span, he won't consider the option of going there, until he meets another survivor who had the same goal as him and succeeded.

Leon has a choice to make—die now for a chance to save his mother, or die in a few years, where the disease rapidly melts his muscles from his own body.

He enters a game-like world, a sort of limbo, where his ultimate goal is to climb the tower of Katastroph before his mother's time runs out. There are a few problems with this though. The tower is almost impossible to beat, if you die you won't revive, and only three people in over twenty years have actually made it back. Leon has two years to climb the tower, with the help of the few people willing to try. People with agendas and problems of their own.

The story starts pretty dark but goes onto a lighter tone. Then (more) dark again.

Disclaimer: This story is an experimental project and I hope to get any and all feedback you can give me.

Chapters tend to be between 3400-4100 words long (about 8-11 A4-pages). Mentioning it since I've seen it in other fictions :P Sometimes they're shorter, sometimes they're longer.

I hope to release a chapter every weekend—the release usually happens on Saturdays, sometimes Sundays.

I really appreciate all comments and feedback, so if you have anything to say, feel free to voice it :)

A rundown of things you can expect to see:

* Sometimes unlikable characters that grow—some readers love them, some readers hate them

* Characters dealing with different traumas while chasing their goals

* Lies and deceptions—what/who can you trust?

* No sex scenes, and no dealing with sexual traumas

* Stats, but not in battle

* Tower climbing (once in a while)

* A pretty grim, unforgiving world that poses as a generic fantasy setting (for the most part)

This novel drew me in from the beginning, it’s well done
the characters are great and all the action scenes are fun
the dialogue is pretty good, the system all makes sense
the way the lead is introduced is nuanced yet intense

The style is standard isekai but with heavy tone
the lead is sympathetic, from the inner thoughts we’re shown
there’s a bit of humour, and the chapters all fly by
aside from some game-info-dumps, on pacing, this scores high

The grammar score is high considering the site we’re on
it’s nearly native, easy to read, scenes are clearly drawn
the author puts a lot of work into the editing
there’s clear distinction between dialogue and narrating

Overall, I strongly recommend this budding tale
if you want a tower isekai, this will not fail
I was sucked right into it, and I’m sure you’ll be too
this one stands out to me, and I’ve read more than a few

Reviewed at: Chapter 4—Taking a Leap of Faith

Not entirely original but it's great to not see another Jason.

Anyway. Reading this, I didn't see any obvious red flags. Sentences ran smoothly enough, grammar wasn't that big an issue, and personalities were easily understandable. Nothing crazy good but that doesn't really matter. Reads fine and that's what is important in the end. I recommend reading it. 5/5

No mistake, this is a must read!!!

Reviewed at: Chapter 10—The RagTag Group

‘Blood Quest’ is a LitRPG with a well-structured premise, logical approach and real consequences that set this tale apart from others of the same genre. Ely does not pull punches in the opening chapters, setting a dark tone before entering the game world. When the story gets truly underway it is a rewarding read that keeps me coming back for more.

Style + Story:
The story of Blood Quest is nicely done, following Leon and the choice he makes due to a condition that threatens his life and those of his family. Unlike many LitRPG’s, the main character knows what he is getting himself into and he has a defined goal. Once ‘in game’ it feels like a more traditional high fantasy with built in LitRPG elements that are a natural part of the world, adding to the story rather than a tale that revolves purely around dropping stats and inventory lists.

I really like that Ely has approached the dark themes in a logical fashion with plenty of reasoning to support the difficult decision that Leon makes in the attempt to find a cure and save his family. Humour is sprinkled among the chapters in little moments that really bring great warmth to the tale.

Character:
Characters are nicely crafted and a joy to read. The main, Leon is no exception. Despite his issues, it is easy to empathise with his decision and follow his path as he begins his journey. His experiences and reasoning  are well thought-out, keeping the reader in the character’s head-space, giving a nicely grounded and immersive experience.

Another aspect I am thoroughly enjoying is that it is not a power fantasy, Leon has to work for it, it’s not easy and sometimes the game-world is outright unforgiving.

Support characters are a joy to read, with lots going for them! They may not be much (at the moment) but they bring a lot to the tale!

Grammar:
Punctuation and grammar is nice, and nothing to complain about!

Overall, ‘Blood Quest’ caught me completely off-guard; I just want to keep on reading! The tale is tightly presented, is well-grounded and makes awesome use of its characters and world-setting! The first chapters are strong and the premise is well defined, hooking the reader in and making you want to come back for more. All I know is; I want to see where this story goes! Don’t hesitate, give it a try!

Blood Quest – A litRPG is a, well, a litRPG fantasy story about Leon. The premise of the story is super interesting, starting when a man who had died returns from another world and back to life, becoming an international sensation on television as he tells the world about his return from the other side. Apparently, anyone who meets the criteria is able to fight their way up a tower and to return to the living world.

Because of the disease spreading through his family and claiming them one after another, Leon ends up taking matters into his own hands and eventually finds himself in the other world of Gaitol, starting his journey as an adventurer as he learns about the world and makes his way to the tower. Along the way, he meets several people who we see more or less of, Hert and Ava being the two most commonly seen. Both of them are interesting and dynamic, Ava is a little annoying at first, but she becomes easier to stomach once you spend more time with her honestly. The three of them get along well.

The world itself is interesting and well built, the introduction chapter is a very strong hooking point that I really enjoyed. The writing is strong with good prose. I found no noticeable spelling or grammar mistakes. The author makes ample use of stats and numbers, but only starts using tables later on, so the earlier numbers are a little messy to read, but nothing fatal.

All in all, if you’re looking for an interesting litRPG with a somewhat darker premise, then please give this one a fair shot! =)