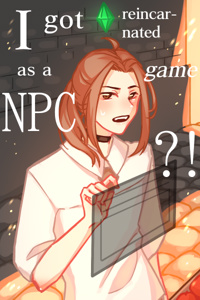 I Got Reincarnated as a Game NPC?!

"He waited at a crosswalk, impatiently watching the traffic light. As soon as it signaled for pedestrians to go, he stepped into the street. A bright white light shone from his right. He turned to face it and saw a pair of glowing eyes barreling towards him.

Intermittent images faded in and out. Bloodied hands, shouts, a crushing noise. Is that me?

Cries, a siren, shattering glass. Why was it so red? Was that the ambulance, or was that my vision?

An aching pain on the back of my neck. Prickling needles. White rooms. What’s that green line?

Yeah, the one on the little screen. The one that beeps. What’s that?

And why is it not moving anymore?"

Oneiro: The Land of Dreams. A virtual reality game that shook the world when it was released-- a game where one could explore a fantastical world while their real body slept.

Arc was once a player of that game. But after reincarnating, he's become something else: an NPC!