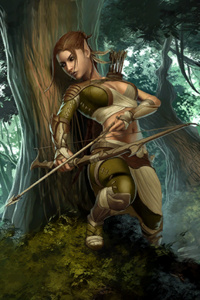 Chapter 7 - Very good across the board

I am not someone who knows much... anything about Elderscrolls but I that doesn't mean I can't appreciate good work when I see it. This is great so far and im sad everytime I finish a chapter as I have to wait another day before an update. The characters make are fun and the timeframe for things really helps to show the vastness of the world.

Shows a lot of Promise

This Review is based on the only Chapter Released right Now. We have good Character Introductions, Characters not purposefully acting like Morons and quite a promising Story in out Hand so far.

I shall Update this Review by the Time about 10 Chapters are released.

This Update encompasses everything up to Chapter 10 and will upgrade from basic to advanced Review and I have to say, the same things I said still stand.

The more the Author introduces Characters the more fleshed out the Story feels. They´re not like actors there to spout their lines, they feel like they have a purpose above making the MC look great and being allowed to shine as well.

Where it does kind of get dragged down is the Aspect of Time. There are some skips in Time which feel a bit empty since Nothing about them is mentioned and the best example for this is the Timeframe (Small Spoiler ahead)

between the End of Chapter 7 and beginning of Chapter 8. Our MC cleared out a Bandit Camp near Whiterun and in the Next Chapter we immediately begin in Solitude without any mention of how they got there (Neither that she arrived for Example by Carriage or how Long she took to reach Solitude)

The Main Story so far has not picked up much, so the Main Plot Points are a bit of a slow trot, however that´s fine since it keeps you invested with Interesting Side Plots and we´re slowly moving towards the first main Plot Hook that gets mentioned in the first Chapter.

Next Update of this Review shall be at 20 Chapters. See you then Everyone and have fun.

As it says in the title. I'm not the best at breaking down my reviews but so far I'm enjoying the story, its fun serious and intriguing enough to want to come back for more. The story gives what is promised, and what I feel is a good outlook on the world and its inhabitants.

It's definitely worth reading

The story, aside from a few miniscule grammatical errors, is really good. The MC of the story is interesting and the premise of it is intriguing.

The whole thing with the MC not being able to remember everything from her previous life but also retaining some of her memories is, I feel, a unique touch to the story.

Wow, I enjoyed this way more than I thought

Others have given more detail so I will keep it short.

This is pretty good. I haven't played skyrim in a long time and never finished it, but it doesn't matter. Also it doesn't get too bogged down in the RPG aspect (I appricate this but other might not)

I would say some additional lines describing areas for those who have forgotten could help. Additionally some more introspection and emotions other than annoyance and frustration from our MC would round her out more...

But that is nit picking some minor points, it is a good story anyone interested should read.

This is very well done.  Basically, the protagonist is born as an elf several centuries before the main plot of one of the Skyrim games (I'm not familiar with them personally).  She barely remembers what happens, and with the time that passes, she has only the vaguest sense of the details and a general desire to run away from that plot. And, of course, a few centuries in a real, breathing world shows that it's a lot harder than any game. This is made all the funnier when she catches up with the plot and realizes that the so-called "main character" of the "plot" is also an isekai from Earth, and she just nopes herself out of there (or tries to). It's all very very well done.

I have read 3 of this author's stories (waiting to see if the one in Hiatus comes back) and they have all been great. This one and Ghost Spider in particular for me are good because unlike the Mass effect story, I am less familiar with both the course of events and Skyrim being an open world with none linear progression for the most part I can be constantly, pleasantly surprised. Looking forward to more.

Seriously this is great it takes place during the Skyrim games timeline but our protagonist has been around a long time (elf) and hardly remembers the game. When she's not rescuing the bumbling legend to be she's saving Skyrim and hunting down her own personal vendetta the characters are great and it really feels like she's walking through Skyrim. If you've played the game recently you can even follow along with her travels as she visits actual side locations in the game.

It isn't bad per se, but it seems to be in big part about babysitting a mentally challenged noob. I guess it's probably supposed to be a humorous sub-theme, but I wasn't amused; only annoyed.