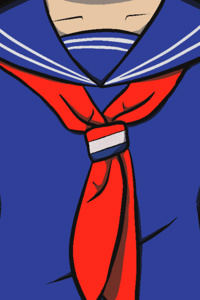 They had been looking for a man named Kevin and as usual, he was easy to find. Normally because he’d be yelling along to his music, but this time because for a change he was sitting still and having a conversation with another customer.

The two managed to add to each other quite well. Kevin, because he looked like he worked in the junkyard, well… Mostly. With his overalls tied below his waist and without a shirt, he could also pass for a Chippendale somebody fished from the sewers. He kept his long curly hair out of his eyes with a baseball cap that was currently turned backwards. Finally, the most interesting thing about him was the fact that he was smoking. Not that smoking was so interesting in itself, but the fact he decided to do it while perched on an oil barrel, surrounded by a dozen more which to most people would be some cause for concern.

The second didn’t look like he worked in the junkyard so much as he looked like he was part of one of the many hunks of junk that surrounded them.

His outfit was dirty denim. Denim pants, denim jacket and had he had the option, probably denim shoes too. The only thing different from his unwashed jeans-look was a large patch on his back that displayed his love of AC/DC. It should’ve been sown on, but he hadn’t bothered, keeping it in place with three handfuls of safety pins.

The two of them were having an animated conversation, where most of the animation came from the denim-clad man, with a lot of gesturing towards a black van that stood ready to leave. Had Zach been forced to describe the vehicle, he might have called ‘The A-team’s van after a three week heroin bender’.

Normally, Zach would have waited for Kevin to finish his conversation, but when he realized who the customer was, he simply walked up to him.

The two long haired men looked up simultaneously, which was where the similarities ended. Kevin jovially raised his hand, but the customer immediately stalked off, proudly displaying his middle finger and scowl to Zach as he left.

Kevin, who hadn’t been bothered by the anger directed at him, simply shifted his attention to the newcomers.

“Not here for my dad,” Zach shouted back, unsure how close he should get to somebody smoking on an oil barrel.

Tara had decided the safest distance was ‘nowhere near him’ and stayed back in the broken bus.

Kevin pushed his cigarette out on the barrel, put the remaining half behind his ear and hopped down from his barrel, raising his hand in high five to Zach.


“Then what brings you to my domain, little dude?”

“Dad gave me money for a car…”

“So I was wondering if I could…”

He didn’t manage to make his sentence heard as the crappy van had finally come to life, by which to say. An engine had managed to start in some unholy semblance of a car, making it comparable to zombies as far as the audience was concerned.

The van rolled through the dirt, sounding somewhat like a World War II era tank approaching Stalingrad, with about as much chance of success for the driver.

“What did Lady-shave want?” Zach asking, drifting back towards the reception bus with Kevin.

“Who, Razor? Wanted some stuff from his van back.”

With the cigarette extinguished, Tara dared to approach again, interrupting the conversation.

“Is his name Razor or Lady-shave?”

“His name is Jake,” Zach laughed, “And whether you call him Razor or Lady-shave depends if you’re a customer or his classmate. So, Kevin, what did he want?”

“As I said, stuff from the van. Stuff the cops would’ve loved to find before they brought it here, but I found it first and I have salvage rights. Anyway, Zach, I’d like to shoot the breeze about your classmates, but I have shi…”

Kevin stopped in the middle of his sentence, remembering Tara was there.

“Just to look around for a car.”

Zach shrugged, “I’ll just get to it then.”

“You do that, little dude. You taking her with you? If not, I think I found a half finished coloring book the other day. … Only a little blood on it.”

He looked at a collection of lockers he had gotten somewhere or which were marked with ‘Found shit’.
“Go no markers though....Unless half molten crayons will do?”

Zach nodded to Kevin, then took point towards the junkers.

If you knew where to look, the functional ones were easy to find. Kevin had tied red and white tape around the rear view mirrors, antennas or any other part sticking out of the car if he felt somebody might still want the car.

Kevin wasn’t supposed to sell any cars under the table, but mister Brooks had simply made it clear that he was fine with it, as long as Kevin didn’t ask for a Christmas bonus.

Even though Zach managed to look at a few dozen cars, the highlights were as follows….

The first was a Volkswagen beetle, in a cheery sky blue, that looked brand new and probably would still move. It really would’ve been perfect. … Had there not been several dead animals in the backseat. Zach made sure not to ask Kevin where those came from.

To get away from the smell, they rushed to the next car, which was something that looked like it came from the east block in a shade of brown so hideous that it reminded them of the toilet the one time Sawyer had attempted to cook.

A third was something that had the odd shape of a square duck’s head, or a wedge of cheese with the word ‘electric’ slapped on the side.

“Definitely not gonna get any chicks with this,” Zach lamented.

“Probably will be. Who wants a piece of junk like that?”

Zach and Tara stared at, what they thought was, a supercar standing in front of them, that had all the makings of the legendary Countach. The sleek lines, the futuristic doors, the style…

It was all there, until they looked closer. It wasn’t a Lamborghini but another car somebody had put new bodywork on.

The rest of the cars, waiting for his judgment, didn’t appeal to him in the least and as such, he simply decided to go back home.


“Nothing, huh?” Kevin asked, “Figures… I sent all the good stuff out this morning.”

“Figures,” Zach echoed, “Fits with the rest of the day. By the way, do you have a pickup or something?”

“Nah, I just need some help to move something.”

“While you’re on the horn,” Zach called after, “Do you know anyone selling a horse?”

“I’ll ask dad and give you a call,” was the response.

Kevin sauntered up to a payphone that inexplicably found itself on the premises.

“The guy in that movie got it.”

Zach sighed, “I’ll just go see again next week if something has popped up.”

“Earl’s coming in twenty!” Kevin called from the phone, “You sure you don’t want that coloring book.”

“You got a soda though…” Zach asked.

“Help yourself. You know where I keep it. Been nice talking to you, kids, but I gotta get back to work.”

“You do that,” Zach said, leading his sister back to the bus turned waiting room, “Let’s see what downer follows this one…”

Tara considered putting a hand on her brother’s shoulder, wasn’t sure if she should, so simply folded her arms and kicked at a rock.

If anyone's curious about the 'Cheese-wedge car'. I did not make it up. If you're interested in that sort thing, it's a 'citicar' and 'moving cheese wedge' is pretty much the only thing that came to my mind when seeing it.

Bio: I am the very model of a modern author digital,
I have knowledge useless and impractical
Which I use to weave a taste fantastical
In hope of an audience approvical.