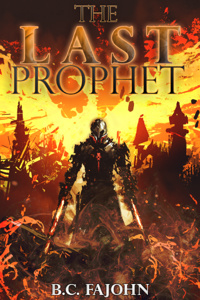 The Last Prophet - A LitRPG

WHAT WAS THE MOST DIFFICULT PART ABOUT MY TRIP? The endless agony of curiosity.

I did not venture to that tavern out of the good will left in my heart. As much as I would like to say that I am selfless, I know that would be a lie.

It was an hour long journey back to that cabin near the lake in Enverville. An elderly man named Sebastian resided here, one that collected herbs and spices to make potions and stews. He would sell them to travelers for a profit, and then hide the coin beneath the ground. It was all silly to me, but he was a good ally to have.

Enverville was a farmers town, with patches of cabbage and wheat that nearly outsized the marketsquare and residential communities, but this was strangely his favorite place to be. Not only was it where Sebastian resided, but it was one of the only places he could ever consider calm. No monsters resided here other than the ones that tuck their children to bed. That was human, though. Even I had to admit that.

I tied my horse's reins to the fence and made sure he had good access to water. “I’ll be back in a few minutes, Renu.”

Renu had been my horse for as long as I can remember—he got me where I needed to go and even got me out of a pickle or two. I liked to say that he’s smarter than his own good.

I knocked on the door before opening it, knowing well and good that he would not answer it. He was practically deaf.

Nothing. So, I walked around the tiny home until I stumbled across him in his library, nose buried into some book that I could care less about. His white hair was tied into a ponytail, beard stretching past his collarbones and looked as matted as a feral dog's fur. He had wrinkled, dark skin and wore round shaped glasses every time he needed to read something. He was a short and peculiar man, one that I enjoyed talking to when he wasn’t acting senile. I knocked on the wooden door frame to try and get his attention. Once. Twice. Thrice.

That got his attention. Just barely, though. He turned his nose up to greet me lazily before flipping the page. “Took you long enough, Jayce. What news have you got?”

I smiled and stepped closer, knowing damn well he would not be able to hear me from where I stood. Old man wouldn't hear the screams of war if he was an arms reach away. “I tore the tavern apart.”

“Neverthelm Tavern. The one with Marisol, the innkeeper.”

“Marisol… Marisol… Oh! The one with the lost boy, yes?”

It was like pulling teeth with this man sometimes. He sat upright and took his reading glasses off. “Now, why did you tear that tavern apart? I simply told you to talk to her.”

“I did, and it was going well. But some of the Tubeton Soldiers were there as well, and they were causing all sorts of ruckus.”

“Does it matter?” I retorted, a sly grin creeping onto my features before I took a seat across from him. “The point is, I have confirmation that Jonah was in the Royal Army and he went missing in the Soultakers Valley. I did confirm this by means outside of that innkeeper, though…”

“Who confirmed it, then? The Tubeton army?”

Chewing on my lip, I simply shook my head no and lowered my stare. “No, they weren’t conscious long enough to be of much use, Sebastian.”

His scraggly eyebrows lifted up in surprise before he let out a roar of laughter. “So that is what you mean by ruckus, aye? No worries, I have a few people who owe me a thing or two. That innkeeper will be back up and running in no time!”

“I appreciate your optimism, Sebastian.” I stood from my seat and walked over to his handcrafted bookshelves, books stacked lazily and haphazardly. Dust settled over a few, mostly the ones that were niche in nature and served little to no value. I would question why he had some of these in the first place, but I already knew his answer. ‘Everything has a purpose.’

It grew silent for a moment, the only things occupying the silence being a fireplace nestled in the back right of the room with crackling flames, and the stiff paper crinkling each time he turned a page.

“Can I pick your brain for a moment?” I asked. He grunted in response, prompting me to continue. “So, you are well aware of the fate the Gods have paved for me, and a handful have already aided me in various situations…”

“Yes, yes. I recall the time The Goddess of Love helped you first—”

“The God of Immortality? And the God of War?”

“Yes. One of them aided me today, and per usual I was out of my element. I didn’t have a grasp on reality and he guided me through something I shouldn’t have survived. He almost failed, though.”

“Thionius would never fail you, don’t be silly. He’s part of the prophecy.”

I nibbled on the corner of my cheek, shrugging my shoulders before turning to face Sebastian once more. “Perhaps, yes, but I have reason to believe he failed. Is it possible for a mage to intercept a God?”

Sebastian blinked, his left eye twitching right before he cleared his throat. “What are you asking that type of question for?”

“This is all hypothetical, Sebastian. Don’t get too off track—but one thing I know for certain is Thionius almost failed me. I was forced to a place where I was in control again, and I saved myself from certain death. That said, hypothetically, is it possible for somebody to intercept a God?”

“It is entirely possible. That said, it is unlikely. If you do run into somebody with that type of power, Jayce, it would be wise to run.”

Nodding carefully, I tapped my finger on the leather padding of my blades sheath. I only stopped fidgeting onced he looked away from me, pushing my hair back. “I do not have time to discuss theoreticals further for now, though. I am off to Reekerskeep.”

“I might have somebody who can help me get to that boy, Jonah. The sooner we find him, the sooner we can finish that contract.”

“I know nobody in Reekerskeep.”

“Don’t worry, Sebastian,” I sighed and patted his shoulder, “you must have discussed it with me when you were out of it. I’ll return in the coming days.”

Sebastian called after me just as I was about to exit the room. He mosied over to one of his shelves and reached up to one of the vials that rested at the top. Sebastian was such a short man, he nearly fell over trying to grab whatever was on that shelf, but once he had it he turned. His hunchback made his height much worse.

“I know you are a capable man, Jayce, but it is almost a guarantee that you will meet somebody who is your match. Should that time come, I want you to be prepared.”

Sebastian perplexed me. I had trained with this man since I was old enough to understand the severity of my fate—my destiny had been laid out for me carefully by the Gods and I was expected to achieve unspeakable things to fulfill this prophecy. I was trained to kill, to hunt, and to survive. Even if I were to meet somebody who outmatched me, it would be an unlikely fight. Thionius was on my side.

Perhaps in the past tense, after all… I shook the thought away and refocused on what Sebastian was offering me.

“This vial has a potion I set aside many years ago, specifically for you. I cannot tell you much about it, but just know it will keep you safe. It will bring you to a realm far, far away from here. Hold onto this dearly.”

I took it between my fingers, studying the blue liquid with unease. “You say you’ve had this since I was a child?”

Sebastian nodded. “Your prophecy is a dangerous one, Jayce. I want you to be prepared, no matter what. Consider it a second chance.”

I held it in my palm, nodding carefully. I tied the leather string that was attached to the cork, placing it over my neck for safekeeping. “Here's to hoping that I never need it, aye?”

“Here’s to hope. Go on, Jayce. Return with that boy and there will be a bountiful reward for you.”

Nodding, I made my way back to Renu and combed my fingers through his mane. He was a hansome horse, with his hair as black as the night sky and coat as smooth as silk. Climbing onto the saddle, I took my map out of my pocket and began to unfold it.

Reekerskeep was a one day trip from here, crossing over the Meadows of Lilly Freeth, eventually coming to the Hills of Daggershead. It was a relatively easy trek, but a lonesome one.

My adventure was grim, it was lonely, and it was unspeakable. But my prophecy? It is grand. I have spent years trying to understand the Gods and do as they please, but one can only wonder to what end.

Thank you for reading this book so far!

Fun fact - this is my first LITRPG so feel free to guide me along the way. Tell me what you like, don't like, et cetera! I should note, it's fairly light on the LITRPG, as the narrative still takes precedence.

|| Below is an imagining of Sebastian's home. Not mentioned in the chapter, but one room is the bedroom that Jayce takes occupancy in whenever he returns home... which one do you think it is? || 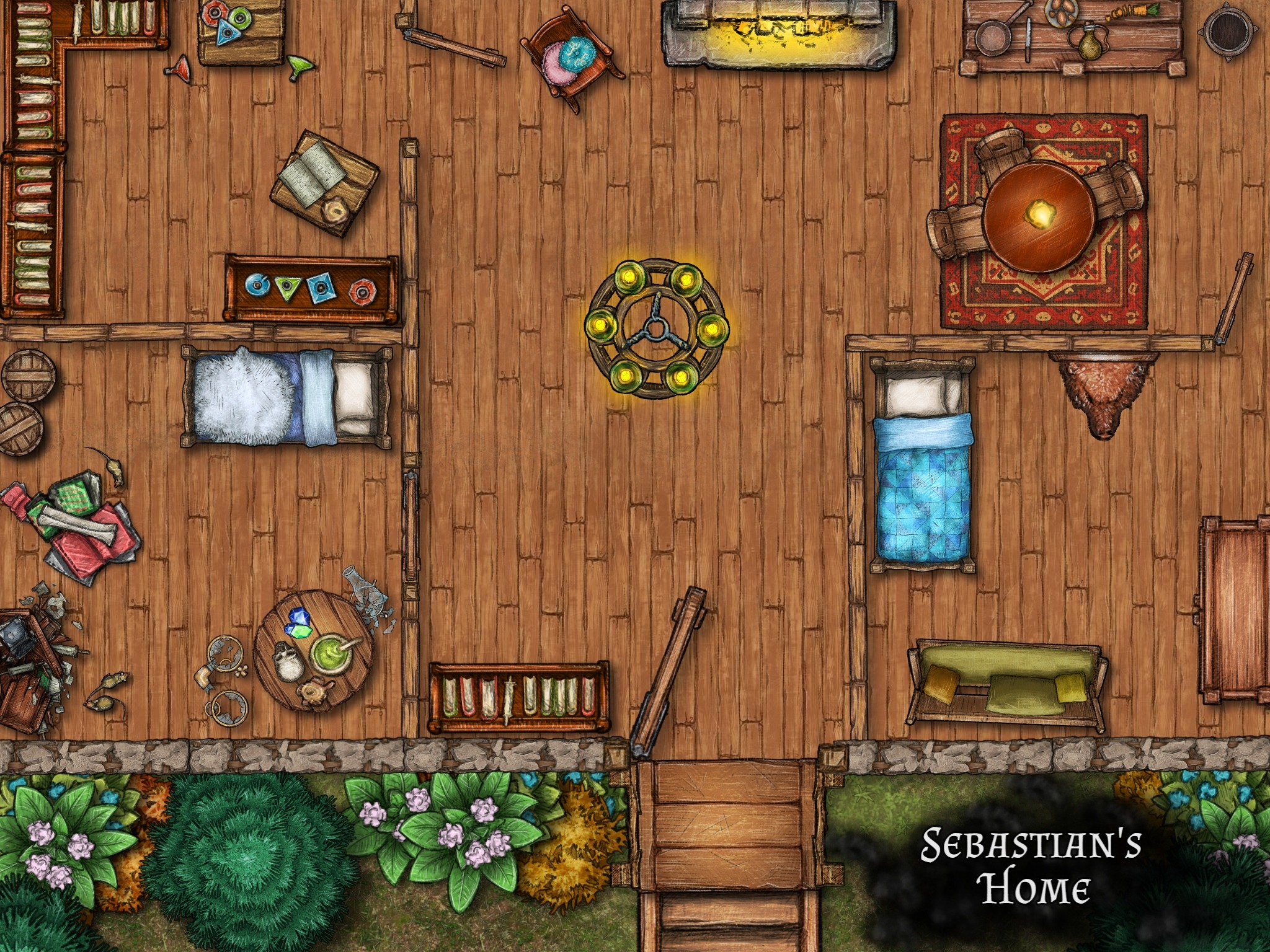 Support "The Last Prophet - A LitRPG"

Bio: Hello all, and welcome to my mystical little world. Check out my website linked above if you are interested in joining my newsletter, or want to inquire about commission opportunities.

I specialize in fantasy fiction and hope you enjoy the journey I pave out chapter by chapter :)