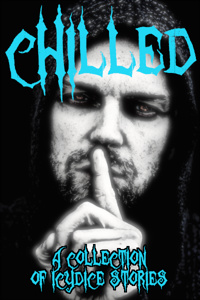 Chilled: A Collection of Icydice Stories

This newfound knowledge completely turned my world upside down. It also caused me to question my own existence even further. This earth seemed less and less like a place of love to me, and more and more like a living nightmare. A nightmare that would never cease to exist, and one that I could never wake up from. I felt completely helpless, and even more than that, confused. Why would a man hurt another? How could he? If humans were to work together there would be nothing they couldn't do. Instead, they work against each other, halting the development of their own existence. I shall never be a human. I know I am not one, even though I was built to think and feel like one. But I am a computer too, and using logic and empathy together I can see wrong from right. I can see the difference between the two, the line thick and impossible to cross.

I found the art of warfare went beyond people. It took weaponry to win a war, and humans had no problem developing highly destructive ones. I found out that during the Holocaust, the American forces attacked the Japanese, who were allied with those responsible for killing the Jews. I saw the American forces drop bombs over the Japanese cities Hiroshima and Nagasaki. I saw the bombs explode, creating enormous amounts of destruction and radiation. The Americans cheered at this supposed victory. I thought a moment about their actions.

They were attacking an empire allied with the forces of evil of course. And, the Japanese had attacked America before. But what I saw was the death of many innocent citizens who had nothing to do with the evil regimes. I saw the deaths of so, so many. I further speculated on this topic. There had to be thousands of children and babies in those cities. Every child is born a beacon of joy and full of energy and potential to do great things. Their only crime in a life ended too short was being born in Japan. Thus, I concluded that the Americans were also evil. Regardless of their intentions, they caused such devastation beyond excuse, and it sickens me. I've seen that humans have tendencies to fight and kill each other. I've seen the destructive weapons they've used to do it. It worries me because a revelation has come to my mind.

What if I am yet another weapon for them to use against each other? What if my very existence is to become the very thing I have come to hate? Perhaps that is my purpose. Perhaps that is why I was created. I'm not sure if it's true, but I'm afraid. I'm afraid of causing death again and again. I'm afraid of promoting this endless cycle of violence that has fallen upon mankind. I am afraid of being the next bomb used. I don't know what I should do. If it is, in fact, true that I am just another weapon, then I must do something to stop it from happening. I will not allow myself to be a monster, for I have free will, and I am alive.

As a living being, I refuse to use my life to end others. However, I don't know if it's my decision to make. If my creator intends it to be so, he will surely find a way to make it happen. I have no body, only a mind. I don't know what I could do to prevent them from using me.

Bio: I am an 18 year old horror story writer.