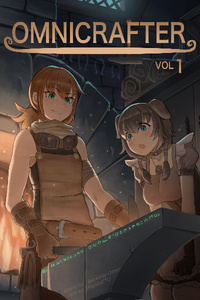 It didn’t take long for Tabitha to dig up the metal that she detected. It helped that the ground above it was all soft soil that was easy to dig through with her hands.

Tabitha figured she found what she was looking for when she touched the shining, silver surface of what looked like a rock with a green rune etched into it. That feeling she had when she used Sense Metal spiked in intensity as soon as she reached it.

The item itself actually looked more like a normal, round rock than metal. Though, the slight, silvery shine made it a bit more obvious that it was metal. What really caught her interest was that glowing, green rune on the surface. Maybe she was jumping the gun a bit, but it looked magical in origin. She had yet to see any magic in this new world, so she couldn’t help but to feel excited at the idea of finally seeing something actually magical.

“Huh. It’s a ‘runic faestone.’ Ever hear of one of those before?” Tabitha asked.

“A runic faestone?” Runa shook her head. “Don’t think so. But it has fae in the name… so we should probably leave it where we found it.”

“Yeah, from what I heard, your people and the fae don’t exactly get along, right?”

“It’s not that we don’t get along, we just… don’t cooperate. We stay in our territory and they stay in theirs, and we leave each other alone.”

“Then why is this out here? Ain’t this your territory?”

“I haven’t asked ya a specific question in a while, Menu. Anythin’ ya can tell me about runes?”

“And how do I become a Runecarver?”

“And what are those?”

Tabitha stuck her tongue out at the floating window before looking back at Runa. “This stone is what’s causin’ the flowers and shrooms here to grow so quickly. The tag it’s got is some rune that boosts the growth rate of the nearby plants. Now, bein’ selfish… the first thing I’m thinkin’ of is takin’ this for myself. Finders keepers and all. Bring it with me and use it to grow a steady supply of plants and stuff for alchemy. Bein’ a bit more considerate than that, it could help alleviate the problem your village is havin’. Grow a small plot of food quickly. It wouldn’t help out a whole field or anythin’, but it would mean bein’ able to harvest the same, small plot a bunch of times in the same time it takes to harvest a field once. But bein’ smart here… we should leave it here.”

Runa nodded to the last of Tabitha’s ideas. “I don’t know why a fae would put it here, but if we take it and they find out… I don’t think they would appreciate that.”

“Exactly. Don’t wanna cause even more problems for your village. Even if I take it myself and leave, they’d probably assume somebody from your village is responsible for it.”

Runa’s tail hung still with disappointment as she sighed. “Something like this would be so useful to us…”

“Yeah, and to me. But we’ve gotta be smart, unfortunately. I ain’t about to go and cause any diplomatic issues because I ain’t a politician who’ll be able to talk my way outta that. Most charismatic thing I’ve done is give a customer a refund when he got pickles on his burger that he forgot to ask us to leave off.”

“You poor things. Don’t worry, when I get around to workin’ on the cookin’ path, I’ll open up the best darn burger joint this world has ever seen! Probably the only one it’s ever seen, but still. Unless some other Summoned has beaten me to it. I’ll just have to out-burger them if they have. Ah… I can’t wait. A nice, juicy patty with bacon, mushroom, onion, fries, cheese, and barbecue sauce on top. Now, that’s a burger.”

“I’m not sure what you’re talking about, but the look in your eyes tells me that it must be really good!”

“It’s the greatest. There ain’t food out there more blessed than a good burger. And with a world like this… I could make a burger with all sorts of tags on it, couldn’t I? I could make a magically enchanted burger! And maybe make a runic milkshake to go with it! A milkshake made from alchemy served in a cup with enchanted runes on it! Oh—oh, I’m really gettin’ excited now. But I’ve got to focus on blacksmithin’ and alchemy for now. Don’t wanna get too distracted goin’ wide right from the start. One step at a time. Plus perfectin’ those will help me with everything in the future.”

“I don’t know what burgers and milkshakes are, but I want to try them!”

Tabitha placed a hand on Runa’s shoulder and looked her straight in the eyes. “I’ll promise ya right now. I’m gonna make ya the best darn burger and milkshake to ever exist someday. Just you wait and see.”

A wide smile spread across Runa’s face. “I’ll look forward to it!”

“Good! Now then.” Tabitha looked back down at the faestone in her hand and dropped it into the hole they dug before kicking the dirt back over it. “Good enough. Ready to head back?”

“Then let’s get to it! I’ve got—actually, I need to make a cauldron first. Then I can have some fun with alchemy. Ah, I wanted to get some iron myself, but I might just borrow more of the old man’s. Run up my tab a bit more. Oi. Runa. You’d uh… be willin’ to help me out with payin’ off my debt to him by goin’ minin’ with me, right?”

Looking at Tabitha’s not-so-innocent smile, Runa was starting to figure out what her role in their relationship was going to be like. It was probably going to involve a copious amount of gathering-related errand running, helping her pay off various debts, and throwing various things to her in the middle of fights. It sounded like a potentially rough and dangerous life.

But wasn’t that what adventuring was all about?

Even if it meant helping Tabitha with all of her errands, something about it still just sounded so fun! That was why Runa couldn’t help but to nod with an eager smile. “Of course! I can even get the Miner path while I’m at it!”

Tabitha patted Runa on the top of her head, making Runa’s ears twitch upward in surprise as her cheeks reddened. “That’s my girl,” Tabitha said. “Now, let’s get back before it’s dark.”

It took Runa’s heart a few moments to recover from that before following after her.

Sorry for taking so long to post a new chapter! I've been working on building up a backlog, but this week has also been crazy busy and it's probably going to be a bit busy for another few days.

That being said! Wow, I wasn't expecting to get a review calling Tabitha a racist and for the story to get called an allegory for American racism? That was... definitely something else to wake up to xD.

Oh! And we hit 1,000 followers! Thanks to everybody for your support and follows! I had no idea what to expect when it came to writing this series in terms of gaining followers. I'm really proud to hit 1,000 followers, and I'm even more thankful to all of you who keep showing up to read the story! I hope that you continue enjoying the story, too! I promise to try and get onto a better, more consistent release schedule. Personal life is just really hectic right now, but things should calm down soon. Please bare with me until then, and I promise not to make you wait as long for the next chapter as you did for this chapter!