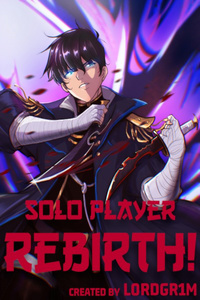 As of the latest chapter, I have decided to drop this story :( I'm sorry about that for those who enjoyed reading it.

However, I have some good news for those who like the story :) I didn't just drop the story and forsook it. My story has gotten a lot of feedback and criticism, and when I realized how much potential my story missed, I decided it was time for a makeover!

Introducing my new story: [Rewritten ver.] Solo Player Rebirth! It's the same, just better! And I aim for this one to be the final major makeover for this story. And believe me, rewriting this story is a preeminent task. But in my opinion, it's way better! So click the link below if you are interested. Thanks, L0rdGr1m.

Every year thousands of people get teleported into a gamelike world where they have to fight for their lives. No one has ever completed the game, and the nine pillars, which are the strongest players, are not even close. But the hope of completing the game still persists in most people. But will anybody ever beat it?

Sung-jin is the best player that no one knows of. A solo player thought to be dead years ago; will he be strong enough to beat this game?

Par for the course for a litRPG story

As someone who has only recently learned about the LitRPG genre and what it entails, Solo Player Rebirth contains what is standard for its stories.

Stat sheets. Equipment with perks. A System that details how the game works.

If you're looking for familiarity or perhaps even a new reader in the genre that's trying to become more acquainted with it, this story is not a bad place to start. It's early in the story's life, so a lot can change, but the protagonist is the standard "top tier player looking for a challenge." I didn't find his personality to be particularly memorable, but perhaps some readers prefer characters that are both confident and have the power to back it up.

Grammar is fine. The way dialogue is broken up is jarring to me at first (every line of dialogue gets its own line, then the character's actions that accompany those lines is on a new paragraph), but it is consistent so it's easy to get used to.

It's an easy to pick up and read story.

Reviewed at: Chapter 3: A Savior Appeared

The story reads like a diary of a half-mad perpetual drunkard and it's all because of the narrative. You do not go "Oh yeah my character thought that eating dinner is good" followed by the character's:
'Ah yes, getting a lot of calories now will give me strength later!'

It's disjointed and doesn't read like a story at all, more like a really mediocre recollection of events that no one cares about, because you can't feel anything for the main character. It's all told and in a bad way.

I'm leaving 1,5 stars because grammar is simple yet correct, and the story idea itself isn't bad, but the way it is told in the narrative simply kills it, it's uninteresting and honestly unreadable if you're used to anything remotely decent.

In all honesty, this "effort" by the author deserves a 0,5 star, but I won't completely crash his rating like the trolls do on other fictions. Nonetheless 1,5 star is already more than this fiction deserves in its current state.

For the author, please learn what show versus tell is, consider not putting the thoughts of the character after your narrative, but include them in the narrative itself, such as "X thought about using a skill, but quickly found out he couldn't due to rebirth. He readjusted his strategy on the fly and..."

Alternatively, use first person narrative, your character already reads like a 2D cardboard piece pulled by its strings, if we actually knew his motivations instead of just "only I can clear dungeons" then we as readers could sympathize and cheer him on. For now, your character's just a mental case echo chamber that repeats what the disjointed narrative said in different words.