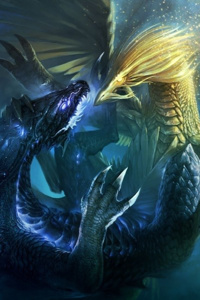 Dusk and Enurto's worry over Radais small size was quickly made pointless.

His growth was explosive. At a month old, he'd more than doubled no triple his original size. Radais was easily seventeen feet long, and when standing up, he hit the eight-foot mark with little trouble.

But at the moment, Radais was still a hatchling. So his parents did their very best to make sure he'd be ready when it was time for him to live on his own.

"Ahahahahaha!" A certain purple-eyed hatchling could be seen running throughout a dense forest, ducking and dodging the terrain of low-hanging tree branches and bushes.

"Radaisssss!" Dusk's voice echoed through the very same forest, causing birds to bolt out from their nests into the safety of the sky, as well as any other animal who values their safety. The mother purple dragon angry yelling only caused her son to laugh even harder. With a book wrapped in his tail, he dove over a bush, rolling back to his feet before continuing his sprint.

And Radais is always in trouble.

Radais had been bored, a constant mood for growing up in a forest swamp with only his and his parents. So what was the solution you may ask for said boredom? Doing everything he was not supposed to do.

Finally, he had slid to a stop, letting out a deep breath as he collapsed underneath a tree. Despite his chest rising and falling as if he had run a 20-mile marathon, there was a big, in mother words, shit-eating grin on his face.

"What kind of book did mother have in any way."

Radais brought the book to face. "I still don't why I have to read Common. The title says 'The Bizzare Aventures: Battle Tendency. Taking place in another world, the story follows the misadventures of Coop Anderson, grandson of Kiva Megas, as he masters the innate power of Magick. To combat hostile, ancient evil named the Dampers, creators of the Bloody Ruby of Sabine that plot to become the ultimate lifeforms and rule the world... Man mother sure does have weird taste in books. I have never seen this type of book before... Oh well. "

Enurto had definitely rubbed off on the boy, one way or another. Mainly in the ways of his jokester personality. Whether that was good or not was still to be determined.

"Time to see what this is all about!" He opened up the book, scrolling through the pages.

The book was filled with images and content he had never seen before. Weird-looking guys in different types of clothes; some even have no clothing.

"They don't look like any animals, monsters, or fish I have seen before. They look weird and fleshy? Is that Coop Anderson?"

"He looks kinda weird." Then, as he reaches almost reaching the ending of the book, he couldn't help but noticed a shadow above him.

Radais sees his mother, and she is far from happy with him. His father was trying to hold his laughter.

Maybe he shouldn't have stolen her books after all.

"...Hey mother... Do you have round things on your chest like him?"

"You are in so much trouble, young man!" Dusk walked into their lair home with her child wrapped in her tail.

"I was just wondering! What are rounds things? They look-"

"Shut it! We are not having that conversation!" Not now, not ever, not in a million years. Young man! Now go the corner!"

Radais runs off the corner before his mother can yell at him.

"I swear to you... Just-grhhhh-" Dusk turned around, taking a deep breath. "You're Great Wyrm Dusk; stop arguing with a child."

"Honey! I need to relax; come to the gold chamber now!"

The black dragon sighed. Raising a kid like humans may have been just as hard as many people had said.

No wonder humans have strong wills. Taking care of something is very exhausting. Enurto wonders how the rest of his subjects are doing with this side project of theirs.

Radais didn't know how much time had passed, a couple of minutes or maybe even an hour, but eventually, boredom caught up.

"I'm boreddddd!" Radais sat up, scratching the back of his head. Like a dog would. "That old hag can't keep me locked up in here forever."

With the sun standing bright in the blue sky, a certain hatchling was drench in sweat.

For the past five hours, Rdais has been doing dragon push-ups.

Ding! You have gained +1 Strength from stressing your muscles!

His mother has been forcing basic exercise training for the past month.

"Don't make yourself crazy, little one." she said, "It won't be long now."

"I don't know how I'm going to stand it." he hissed, "It feels like bugs are crawling all over my scales."

Normally molting of dragon wings doesn't happen until a decade after their born. But Radais was not a normal dragon.

"After your done training. I want you to meet someone," Dusk said, getting her son's attention. "He is another hatchling like yourself. But for now, I want you to go hunting for some bison."

After hearing that the chaos, hatchling dropped to the ground, tired and sweaty, the feelings in his muscles are sore that he doesn't want to move.

"You got five seconds to hunt for bison, or you will fight me."

In a flash, Radais makes his way over to the Moon lake near his family's territory. The entrance is between the training area and their territory. You need to walk through a unique cave to get in here. Without permission, there is no way an outsider can enter here.

It's taken fifteen minutes to arrive. He looks around for some prey or something to do but no. There is no sign of other animals, even mice. He immensely disappoints but since he is here already. He should swim and clean up himself. There are some types of blood on his body, and it is stinking. He liked it, but it might be a reason why other animals know he is here.

Damn old hag for not letting him finish the manga book thing.

After he takes a quick bath, Radais begins his exploration. The hatchling sniffs everything around him. Only to smell of weak game. Rabbits, squirrels, snakes, and mice. This is so lame. He wants to hunt something big such as elk or reindeer.

Or Bison. Man, are bisons good. Their meats and organs are sweet and soaked with fresh blood.

However, he is tracking rabbits. He follows their trace, such as footpath and odor. Radais noticed that small mammals have something that has put them at a disadvantage. It's a footpath. They always use the same routine to find a portion of food or run from one place to another. If you find it, you can ambush or trap them.

Then something caught his eye.

"What is that doing here? Father is going to be pissed that someone got into this place."

In the cage was a small, light blue dragon.

It was small, probably no more than three days old, but it was gagged and bound and couldn't move.

Radais was appalled. Where were the parents? Who were these people? As he sniffed the air, he realized that he could smell dragon blood scent from the inside of the cave with a jolt. What did these humans do?

Didn't his parents prefer them as manlings?

Anyway, Radais decided to spy them on. He strained his ears to listen as the men spoke to the guard.

"They are speaking common."

"Nice catch we got, right boss? I bet it was easy as heck," the soldier returned disdainfully.

"You moron! The parents weren't easy this time. They actually put up a fight, damn things. Took out three of battalions before we killed the drake, and another two along with their kid."

"The Bossman won't be happy about that."

"Well, we got one, okay? It's better than nothing. He just wants to train them, right? Isn't it better to start with young ones? I thought the adults were untrainable."

"Just get the dragon in the cave, and we'll talk about payments later."

"Have it your way, asswhole!"

Slave traders. These people were professional dragon killers and kidnappers.

How to calculate power.

Bio: I love Dragons and writing about them.