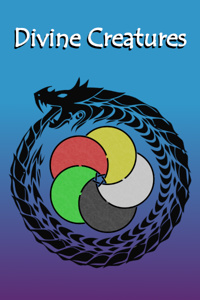 Kestra, a [Combat Alchemist] and [Woods Wraith Hunter], is excited to finally receive her third class. But when she attempts to do so, she instead receives a tribulation from the God of Trials, loses her classes, and is informed by the voice of the world that she's been selected to transmigrate with only three days to go. She tries her damnedest to prepare, but even the Elements are different in this new realm. A relatively staid adjustment period is completely abandoned though as she finds that, most distressingly, hundreds of transmigrators have appeared recently with dozens enslaved by the local city lord. Fine! She may have lost her classes and the magic is funky, but she'll be damned if she doesn't have a few true-blue skills up her sleeves.

A light hearted romp where the protag transmigrator *isn't* from Earth. The main story takes place on more of a western xianxia world.

Note: profanity tag is because of side characters, and sexual context tag is for some risqué elements before fade-to-black scene.

Book 2 will be added after it is all written.

Updated to add fanfic tag because when I picked up the latest Ten Realms I realized that series has had a lot more influence on the setting than I consciously realized. Don't expect military or industrial revolution in xianxia, though.

The story is good enough for an enjoyable read and I think if you like your characters OP without being over the top you will enjoy it.

Overall the MC is a bit of a mary sue sometimes. Specifically that she knew mana in her realm then got here and is very very good at it (crazy good) plus her class skills she brings over amaze everyone, (transmigrated in the description) to the point it feels very OP (but I know some like that)

Note some discussions here, but these are my opinions, the story isn't bad at all and some may like the OP MC

I have no problems with her having great skills.  If it had been said she was almost a hermit that obsessed/had a connection with alchemy and hunting for her materials but knew very little else (like dealing with other people or cultivation aspects) she would have felt quirky but reasonable power wise.

Now she seems to do everything easily and know things that even gods don't know while having no downsides.

I know the divine beings have been described as having simple minds to describe their quirks but her first friend wood emperor seems way too smart for that.

Basically I would have toned her down and roped back to being really good at a few things while the gods are amused and are power leveling her for more amusement less repayment.

So, to make this clear, its a fanfic based on the 10 realms. Which, in all honesty, isnt bad, as i dropped the original at book 4 and a new take on its lore is a nice thing. Why? I just disliked the author getting lazy and turning the second protagonist into a side kick. Ok, that was longer in the making then just book 4, but at that point i just said enough is enough. Also thats just my personal like/dislike and dosnt matter here.

But this is about this book, not 10 realms. So whats to say? Power progression is, fast. Like super fast. MC getts pretty much everything plus cheats layed into her lap, which she then takes with the grace of a noble lady. Then she wealds said powers to solve every (or most) problems with easy.

Hmmm, i supposed that sounds worse then i intended? Im not much into op characters or TO easy aquired power, but this one? Its more about characters then these things, so it was fine for me and i truely enjoed the reading experiance.

On a side note: I was shoked, SHOCKED! - that the (strong) female(!) protagonist wasnt actually gay or allegedly bi (which still ends with a gl in the end), but got together with a male. This is not me being against gl story, i read that kind of content often enough here on rr with female mc's (also i find it a bit sexistic that a 'straight' female cant be a strong protagonist ^^), no its just that its sooooo out of the norm here on rr that i had to put down my (metaphorical) glasses and clean them to check if i read right. xD

So, 5 stars for a story that i wish to read more of, even if it dosnt check all the boxes for my normal preferences. :)

Is that a custom seperator?!

Damn. Didnt think I would ever see somebody actually feature. And its actually pretty! Like, no pixels can be seen from that beautiful thing. I had been so worried that anybody trying to use them would leave their fiction wiohtut any positive effects from it, but this more than makes up for everything else.

Would also comment on the use of indents. Not a standard for web-ficitons but the plot is interesting enough to ignore that part for now. Grammar is alright as well, so there's nothing to stop would-be readers from at least giving it a try. 4.5/5 from me

It's a good story if you can make it through the early bits, the first 5ish chapters are pretty big info dumps, the story would have benefitted leaving a good chunk of it out, or introducing it gradually.

The MC is reasonably knowledgeable, and while OP, seems less so with the overpowered and more experienced company she keeps. The "first realm" is very much a prelude. The MC faces little to nothing in the way of actual adversity, any sense of it vanishing with her acquisition of a divine benefactor, almost grandfatherly in nature. The MC's exposure to, and interactions with similar divine beings is kept interesting, and the influence they have on her feels fresh. They do very much hold her hand the entire way through, power leveling her, and providing benefits that will take others far longer to obtain.

All that said, the story quickly became uncomfortable for me when that grandfatherly tree spirit, aeons old, becomes her sexual partner. The author hasn't included any gratuitous sex scenes(it's a bit more than just fading to black), and going by their own statements likely won't, but they are definitely toeing the line. From this old tree spirit offering to become her clothing so he can pleasure her more subtly, to "tasting the mana of her orgasms" with his roots.

Reviewed at: 21. Proposals to the Ten Horizons

This is one of those stories where everything just works out for the MC. They're overpowered for their supposed level and they have even more overpowered friends to get them out of trouble. Their formerly mundane knowledge now makes them super special in a new world. They get the recognition and benefits of that knowledge without having had to make the discovery.

Ultimately, it's a fantasies that prioritizes conflicts being resolved over being faced. I know there's a big group that find these stories very satisfying, but they're really not for me.

The most interesting difference to the standard: Unlike most isekai stories, the MC here was a professional adventuere on a LitRPG world beforehand (not a legendary super badass, just someone who does it for a living), and so she's nor just flailing. She's also not all knowing, and the balance of believable competence is one of the stories strong points at the start.

Tone wise, it's a fairly lighthearted story so far. The world takes a lot of cues from xianxia tropes, but the people the MC has met have been good and helpful, so it doesn't have the odious grimdark that often puts me off that kind of story.

The plot is a bit strange. Mild spoilers ahead, but frankly the story hasn't been going on long enough to have much spoiling. If you care, read past 8 or so.

Initally, it seems to go for a "Free the enslaved transmigrators" thing, but that gets derailed when a bunch of gods show up and she hangs out with them instead.

That sounds like a wild swerve, and it sorta is, but the events do follow from each other, so it's not just a deus ex, and that earlier plot point does come up later.

It doesn't actually feel like there's a plot (in the sense of an overarching narrrative), and more like the world does its thing, the MC does their thing, and the two impact each other when it makes sense. Kind of like Azarinth Healer does it. Or violent slice of life. Which I do rather like, and it's rather well handled.

There's hints of an overaching thing between big G Gods, but it's not been much, and frankly I don't care all that much. Might become relevant a few dozent chapters from now.

One neat thing is the way the story handles its "cheat". Again, some spoilers.

That's one of the standard tropes of isekai. Here it's basically two levels. First, a storage space. Which is useful, but not new in either of her worlds, and a small storage ring is actually a quest reward for the initial transmigrator quest. Hers is a lot bigger and better organized, and starts to develop towards its own world, but it's nothing new. The second part is a bunch of divine revelations, which are a big deal, but she can't easily access them (trying it gave notice of a juicy thing to everyone, with the obvious consequence of them all flocking to that world, which also causes her later meeting with a bunch of gods). So that part is as much a complication as a solution.

A Great Book With A Smart MC

Overall I'd have to immediately say that my favorite thing in this book has to be the MC and how alien and smart she is. The world isn't the most fleshed out and the characters might not be as insightful and deep as they could be but overall their quite good. But like I said the main draw behind this book is the MC and the unique worldview she takes. She comes from a world where dealing with beings of a higher power is natural and uses this to her advantage. Pressing all the right buttons and addressing these beings in a respectful and calm manner. So far If Id have to give this book a simple synopsis I would have to say it regards the adventures of a meandering negotiating spirit medium who knows how to deal and do business with the greats.