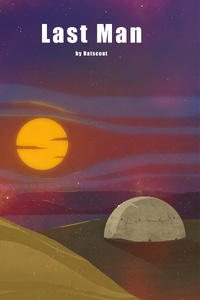 Nikodemus and Carl tip-toed out of the ranch house, sneaking past the staff quarters and their mother and father’s bedroom on silent feet. They traveled down two flights of stairs, unable to keep the hairs on the backs of their neck from rising due to the darkness enveloping them on all sides.

Upon arriving on the first floor of the building, they both gasped when they looked into their mother's sewing room on the left--they thought they had seen a man, but it was only the silhouette of their mother's mannequin. They both sighed in relief.

They continued on their way.

The bizarre sound continued pulsing through Nikodemus' mind, getting louder and louder the closer Nikodemus came to it. When he touched the knob on the front door, it became blaringly loud—it felt like it had rent his mind in twain.

He let out a sharp breath, falling to one knee for a moment. Carl put a hand on his brother’s shoulder. “Nicky, this is scary. Maybe we should go back to bed?”

Nikodemus pushed his hand away. “Go back to bed if you want. I have to know what this sound is.”

Nikodemus threw the door open. He was glad of the lampposts erected outside of the house that brightened up an otherwise pitch-black, nearly starless night. Dozens of gnats, flies, and other bugs buzzed around in the yellow light cast by the lampposts; Nikodemus would have normally enjoyed that sight. On so many nights before, he and his did would sit outside on their stoop and gaze at those bugs while chatting about their day. The sight of the bugs and the predictable back and forth between him and his father brought a sense of normalcy to his life in an unsteady, unpredictable world.

He continued following the sound that droned mercilessly on—so familiar that he knew the sound by heart, and yet so unknowable that it resembled no other sound he had ever heard. Carl, who could not hear the sound, was scared for a different reason; it was the silence that allowed him to hear every hoot of an owl, every moan of a camel, every scuffle in the darkness that could have been nothing, or could have been a member of a tribe, scoping out their property—intending to kill every man and woman on the ranch--that terrified him..

Despite being taller and stronger, Carl clung to his brother’s arm, looking around frantically with gritted teeth.

I wish I could switch places with you, Carl. Maybe then I could sleep well for once in my life. Believe me; an absence of sound isn’t the worst thing in the world. Nikodemus thought to himself.

Nikodemus followed the sound past the animal fences robotically, clutching his head as he did so. His eyes were heavy from lack of sleep, his breathing was heavy from stress.

The sound zipped through his mind again and again. Nikodemus wished he could be scared like his brother, but his anger at being the only one who could hear this sound was overwhelming any fear he had at confronting it.

He walked past the camel pen, the hyena pen, and the cow pen, and finally saw something that was completely out-of-the ordinary in the distance that made him stop in his tracks.

In the distance, he saw a geometric sphere, pulsing with light in time with the sound thrumming through his head, sitting in the middle of the pen where they kept the oryxes. Nikodemus was inexplicably drawn to the sphere. His pupils shrank, and he approached the sphere unblinkingly. He felt like he was under mind control.

“Nicky! Nicky! We should go home! That thing may have killed the Oryxes—it might kill you, too!” Carl exclaimed, grabbing his brother’s shirt and yanking him backward.

It felt like a wave of power contacted Nikodemus’ mind; it lit his brain up and filled it with warmth. A ring of telekinetic power hit his brother, shoving him away. Carl kept attempting to get close, but Nikodemus’ powers consistently pushed him back.

Bio: Hi! My name is Natasha, and I am a Psych student with a BA who loves to express herself through her writing! I hope you will take the time to peruse my stories--they are unique and interesting!