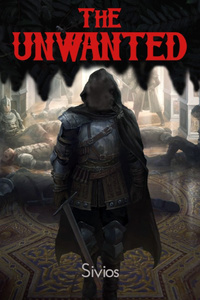 Mute started posing in a weird position like she was taking photos , she tried to speak but couldn’t say anything. A woman's voice that Sol recognised started giggling.

Lucy, the assassin, who was a part of Kraos’s team, emerged a few metres back behind Mute and started to make her dance with an invisible puppet string. Mute then brought her sword up and sliced Sol’s arm off.

Fuelled with rage and covered in blood, Tower began charging Lucy. He swung wildly with his club at her but she was too agile for him to hit.

Sol regenerated and tackled Mute to the ground, he held her down while Tower tried to deal with Lucy. He frantically looked around for Arthur or any of his teammates but couldn’t see them

Lucy kept giggling as she danced around him, making Tower more and more angry. Sol kept checking if Mute was back to her usual self but he couldn’t tell- he was hesitant to kill her.

Tower kept trying to snatch Lucy but it was no avail, she was too quick and was causing small wounds on his body on every miss from Tower.

Tower stopped as he saw Arthur, Synthia and Reddy run out from behind a sand dune straight towards them. Lucy had just been buying time for her team.

Arthur sprinted forwards as his sword lit on fire.

Tower immediately turned and started running towards Sol and Mute.

“She’s still not in control!” Sol shouted to him.

“Give her to me!” Tower shouted as he ran slowly in the sand, “Take her sword!”
Sol held her still and up to Tower who grabbed her and held her close to his chest. He pressed her so tightly that she couldn’t breathe.

Sol grabbed her sword as she tried to wriggle free from Tower’s arms, they were now running together, away from the Kraos team of four. They were missing a healer which was a good thing but they couldn’t fight 2v4, let alone if Lucy made Mute fight for them.

The Kraos team was slowly catching up the group, they were beelining for the Forest of Old. Tower trudged up the sand dune at full face, he was sweating profusely, the heat from the Yellow Sea was getting to him. Sol still had a bit more in him but he couldn’t abandon Tower.

Another minute of sprinting and Tower was panting like a dog.

“I can’t- I can’t go anymore,” Tower gasped as he still clutched onto Mute, “Take her.”

“Get your fat ass up!” Sol screamed at him.

That seemed to do the trick and Tower bit down on the pain from the lack of oxygen going to his muscles and carried on running.

Arthur’s team was only a dozen metres away when Reddy fired a constricting spell on the team. He had a bright smile when he did it and Sol’s blood was boiling, they had caught his team off-guard. Still, they had done that to almost every other team so it wasn’t like he could hold a grudge.

Arthur ran forward on the crippled team when the ground rumbled beneath him, causing him to lose his balance and fall over.

Suddenly, a huge Grinning Lizard Snatcher shot out from the sand in between the two teams.

Sol’s eyes glistened with greed and also fear, it was exactly what he wanted. This alpha was twice the size of the other ones and had vertical markings along its back chitin carapace.

The unique monster had broken the chase between the two teams but it definitely wasn’t over. Arthur used a teleport skill to get past it but was knocked into the ground.

Reddy created a support beam from the sand beneath him and allowed him to retreat back to his party.

“We’re going to have to kill it!” Arthur shouted to his team.

“Where are they?!” Synthia shouted back as poison magic shouted out from her staff.

“We can’t get to them,” Arthur responded, dodging another attack, “Lucy, can you cut its eyes out.”

“That would be useless, it’s sensitive to movements in the sand,” Lucy responded, “I still can detect their assassin so we can track them after.”

Sol, Mute and Tower made it back to the Forest of Old and pinned Mute down on the ground.

“Who’s Lucia?” Tower asked with his hands on Mute’s shoulders, she was still trying to get up in the trance-like state.

“Urm- ok-ok. There’s like a fishing line inside the veins of her body, like a puppet string,” Lucia said out loud.

Tower’s eyes bulged but he was still listening intently.

Mark was studying the scene but still couldn’t quite pinpoint where the voice was coming from.

“You need to cut her vein and flow mana into the fishing wire, it’s not physical so you’ll have to do some mana sense thingy majiggy. Once you do that it should break the curse as that bitches mana would be corrupted and the connection would break, your welcome,” Lucia said.

Tower was awestruck but still held her down, “Where are we cutting into?” He asked.

“Her vein, easiest to access,” Sol replied as he brought out Lucia.

Sol whisked a health potion from his pouch and poured it down Mute’s throat as he cut into the vein on her wrist. Lucia was wrong about the mana sense stuff as he could literally see a thin line of white through the blood.

He pressed his fingers against it and started flowing mana into it. He heard a spell disenchant and Mute’s body went limp.

Sol pressed down on her wrist until the mana potion had healed it.

“What the fuck was that?” Tower asked as he fell backwards.

“I fucking hope so, I shat myself.”
The two smiled to each other under their masks just as Mute rose from the ground like a zombie. Her aura was so dense the two felt they choke on it.

Her whole body signified that she was pissed. No- she was more than angry. She was a person that rarely liked to lose, let alone be taken over. The two had never seen her like this before and they had even seen her get angry.

She picked up her longsword and started walking towards Arthur’s team.

She ignored him, walking calmly even though her aura was giving off imminent death vibes. Sol actually gulped, she was enraged.

“Maybe… We should fight them,” Sol said, “She’s pissed, let her fight.”

Tower scratched the top of his head then his beard, “Alright, fuck it, we did well enough. We’ll stay out of your way Mute, I think that’s best.”

In truth, he was scared of what she would do. She started off with a light jog as the two followed pretty far behind.

“I feel for what’s coming for that cat-kin,” Tower said.

Sol nodded slowly as he started summoning Wolfy and Fluffy back into Gaia. Tower switched his club for his aggressive weapon- the hammer.

As the trio approached, Arthur’s team was slowly cutting down the unique monster.

A plethora of skills were activated as they tried to burst down the monster, it was on its last legs when Fluffy appeared from nowhere and stole the kill for it.

Sol and Tower slowed down to prepare for an engagement while Mute carried on jogging- straight for Lucy.

Arthur relaxed his stance, “What?” He questioned.

“You see the small elf? Let her fight Lucy!”

Arthur sensed the overbearing aura coming from Mute. He turned to Lucy, “Go on then, you can finally have your duel.”

Lucy rolled her eyes and sighed, “But I wanted one with Immortal,” she whined.

Arthur ignored her and moved to the side as the rest of his team moved towards Sol and Tower.

Lucy looked at Mute and smirked, she twiddled two curved blades in her hand, “You are a feisty one, aren’t you? Surprised you even removed the spell.”

Mute slowed her pace down to a walk. The cat-kin could feel the overbearing death aura but she welcomed it with open arms- she loved a duel and she would be given one.

Synthia, Arthur and Reddy moved forwards towards the duo with all their buffs and spells active.

Tower side eyed Sol to know what he was doing but he didn’t understand.

Arthur stopped in a defensive stance, “It’s three’v’two, you stand no chance.”

Sol threw his arms on his hips, “I’m just trying to strike up a conversation, we’re friends, remember?”

Arthur smirked, “I sense a bit of denial in you.”

Reddy launched a basic mana arrow at Tower but he blocked it with his hammer.

“Your aim is terrible, should have gone for my legs- more exposed,” Tower joked.

The support mage scrunched up his face and brought out a shield, “What the fuck are you guys doing?” He questioned.

Sol looked at the giant figure of Draghaul standing on the top of the sand dune. He was holding onto the head of an ogre, he chucked in front of him and it rolled down the sand dune.

On another sand dude, the Beastlands team stepped over another sandude. The Alrathi Prince was riding on a large armored rhino. A few more teams started to appear around the sand dunes.

Tower looked at Sol in amazement, he wondered how he managed to get all the teams here. There seemed to be a standoff between the teams now, none wanting to engage but none the less eager to.

A drone whizzed above them and dropped a ghostly green crystal right between Sol and Arthur.

The crystal then released a green vapour, it smelt like an orc spat in a sink then took a shit in it. Sol rubbed his eyes as they started to water from the smell, it was almost unbearable.

“A stand-off between all the remaining teams, this year for the U50s category has been a thrilling one.” Mark said.

“This is the moment positions can easily be swapped by just a few kills,” Thomas said.

In the stands, June and Summer were both watching with anticipation, they were nervous. But the man next to them was far more so, however, he wasn’t showing it.

Mercy had recruited and trained each of them, he watched them bloom into incredible people. He wouldn’t tell them to their faces but he was proud of them, they had given him the boost to become an Elder.

The stand-off was becoming more tense with every split-second that passed.

Sol cleared his throat loudly, “Right then, shall we get to it?”

Hi everyone, unfourtunately, something's come up in my life and I don't have the energy or time to carry on this story. I will be making everything on patreon free for you all to catch up on. I'm really sorry, I love this story but I can't post more chapters on here. I hope you can all forgive me.

Here's the link to my patreon where you can read up to there free of charge: https://www.patreon.com/creator-home