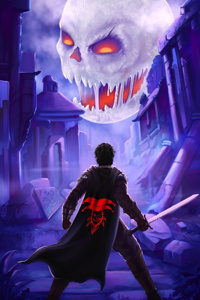 Would you be willing to risk the world to protect your family?

Garrett, a traumatized former soldier of the empire, suddenly finds himself thrust into the world of power and politics when his little sister is prophecised to bring about the end of the world. Forced on the run, he must do what most would think impossible - break the [Level 20] level cap and step onto the Path of Ascension. Only with the power of the famed Ascended - adventurers, heroes, protectors of the plane - will he stand a chance to keep what is most precious to him safe from a world that is suddenly out to get them.

However his own personal power will not be enough. He must gather allies, break beyond the mortal limits and upturn the social order if he wants to have a prayer of succeeding. But will Garrett and his allies be the salvation of this world - or will they be it's damnation?

Marvelous Jester is a LitRPG story set in a completely original fantasy world.

Updates on Wednesdays and Sundays.