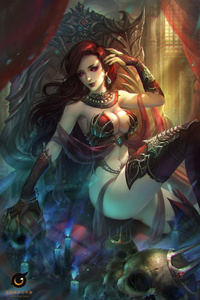 ALL HAIL THE VAMPIRE KING

Stupid! Stupid!, Stupid kobold, why can't they follow my instructions? The Dungeon gave birth to us, and it's our duty to protect it. On our birth, we fought for the position of [floor boss] as the Dungeon calls it. I defeated the stupid kobolds through cunning and strength, and the Dungeon bestowed the glorious [Floor boss] title to me. My destiny was henceforth determined, 'protect the floor at all cost,' I was told.

I quickly figured my tiny legs were unfit for long-distance travel. To this date, that's a shame I have to live with as I can't personally protect the mother dungeon. My woes weren't significant. Protecting the floor was. I steeled myself and got over the fact. Since I was the [floor boss], I could command the kobolds to do my bidding, and that I did.

Punishing the kobolds proved to be adequate for them to heed my commands, so after a few lashes, they cooperated with me, and all was well. So the sudden disobedience was surprising. Not one kobold came back to report. Just as I was considering venturing off the grasslands, the three kobolds showed up, and apparently, they didn't know what the issue was? Do they even respect the mother dungeon's command?

I had to waste my energy to remind them of their job, but now that my anger has somewhat sated. I wonder, where are the other kobolds? The attitude the three showed is enough to tell they haven't rebelled, so where are the others? Have intruders breached them? For the Dungeon, I have to get to the bottom of this.

"Die evil beast," my wandering thoughts are suddenly interrupted by a voice I am unfamiliar with. My perception vision that is always in the ready shoots out to detect the unknown.

What I see shocks me almost to a standstill, a beast never seen before. Black fur, unlike the white of kobolds, ominous red eyes warned me of the danger, but something about them was enough for me to lose concentration, not good a powerful enemy. And it appears to have conquered the skies?

As I was lost in the creature's eyes, it marvelously slaughtered the last kobold in a fashion that I could never hope to achieve. At that instance, I knew I was the next target, and if I failed, the Dungeon wouldn't forgive me. I wouldn't forgive myself. O great mother of all, give me strength with a prayer to the Dungeon. I unleash my arms and prepare to defend the Dungeon to the last of my breath.

"You shall not harm the dungeon!" With that, my long arm shoots towards the beast. Just as I am about to deal damage, the beast nimbly dodges my attack and moves even closer. If you think that's all I got, then.. I unleash a hidden arm and attack the beast again. This time, it's unable to dodge.

My attack connects. It definitely did. But why is the result different from what I envisioned? The creature is hit, yes, but all the attack accomplishes is to recoil it back, and somehow the shadowy beast stabilizes mid-air. Is this still fair? For a moment, I consider escaping. My body is built for ambushes. Once I am discovered, then it's game over. I'm disadvantaged, I want to run, but I can't. I HAVE to protect the dungeon

"[RUSH]," I activate my skill, my last card. If this fails, it's over. All my arms are unleashed and shoot towards the beast. A barrage of fast attacks descends on the creature. Yes, it works. The beast is overwhelmed by the number of attacks.

Now, if only it could stay still and let me kill it, if only it was slower, if only its defenses weren't so tough. I would have won, but the creature has other ideas. My fear is confirmed as it moves back, away from my range. My tiny feet can't allow me to catch up.

The creature moves at a distance and notices I am not following. For some reason, it continues to fly until it disappears in the thick canopy. Has it given up? My instincts tell me otherwise. While I can't follow it, the beast, too, has a weakness. It is unable to move closer.

"What?" I had long forgotten the voice since I became a [Floor boss], my deduction is wrong. From the corner of my perception range's limit, I am able to see a retreating shadow. The speed is so fast that if I weren't on alert, I wouldn't be able to see it.

My pain aside, is it a skill? That must be it. Previously the creature was unable to summon such speed. If I have a skill, why can't others have it too? My life with kobolds led me to view the beast in the same light. If I survive this, I will be more cautious.

My senses are alert like never before. The first time I was caught off-guard, this time will be different.

My declaration isn't done, and I receive damage again. This is getting dangerous. If I don't heal, I will die, and the beast will harm the Dungeon. My tiny legs move in a desperate effort to carry me to cover.

You have received damage -20

The beast's claws cut through my defenses once again. Damn beast, let me reach the covers first, I can feel the exhaustion due to vitality loss. My vision is getting blurry. I know this feeling. During the scramble for power, I was discovered by a strong kobold and got attacked. Though I survived, I swore never to experience such pain, yet, here I am.

You have received damage -20

The beast was tough but not as tough as me. My attacks were fierce and precise, while the mimic was confused and sloppy. At first, its vine-like weapons scared and heavily injured me. I was about to make a run for it, but surprisingly the mimic didn't follow me. That's when it occurred to me that the mimic, apart from its fast weapons, everything else was useless. I decided to overwhelm it with quick attacks. Using [Airdash] proved to be effective, so I used it until it fell.

Once my first attack succeeded, the mimics' fate was mine to determine. It panicked and started to move, a fatal mistake and a perfect chance for me who was in the shadows. Its openings were several, and my attacks connected. If the mimic maintained its position, perhaps I would have to work harder.

I move closer to the mimic's body to examine it. During the last attacks, its body changed into various forms. A tiny kobold, a plant, and other things I couldn't recognize, but that didn't save it; I still slew it.

That reminds me, my drive to slay the mimic was because of a reward.

My excitement is through the roof. I mean, it's a new skill. Something that brings me great joy.

Immediately, I intend to activate the skill, and how to use the skill is registered in my mind. I need to envision what I want to transform into. I think of the mimic, and the image of a small rounded rock appears in my mind; I can feel it, my body morphs and transforms. The process isn't painful. Slowly, I turn into a rock. I have eyes, unlike the mimic, but my limbs and wings are gone though I can feel them.

This feeling is fantastic. Suffering injuries to gain it was totally worth it. I summon my arms and they show themselves. My excitement doesn't end there. I discovered I could change their form at will. With this, I should be able to kill efficiently.

My thoughts wander to the next floor. I want to put my new skills at work

Support "ALL HAIL THE VAMPIRE KING"

Bio: The seniorest senior out there.