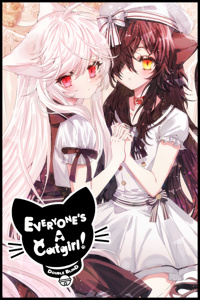 The last thing Matt Kelmer expected at the gym that afternoon was sudden death. The second to last thing he expected was an offer of reincarnation by a goddess intensely moved by his "valiant efforts" before his untimely passing.

But when the option of a world filled with catgirls hits the table, Matt is determined to live out one of his greatest fantasies no matter what difficulties he may face. Equipped only with a standard-issue [iPaw] and the clothes on his back, he'll have to navigate Nyarlea one sweet catgirl at a time.

MC is not evil. Reads like a VN adaption.

MC is not evil.  That said, there's a reason he was chosen to reincarnate into a world with a 1:1,000 men to catgirl ratio by an excitable 'admin'.  That reason, as evidenced by the first chapter, did not include intelligence, cunning, or creativity.

Fortunately, the MC quickly becomes aware that he isn't the brightest, and makes an honest effort to get help and advice from others.  He is on a solid trajectory towards becoming not just a smarter person, but a more considerate one as well.

1. Not letting the admin tell him the rules of the world he was going to.

2. Choosing to go to a dangerous world without knowing said rules.

3. The reasoning behind his choice of Class.  The actual choice was good, but for none of the reasons he thought of.

4. The entirety of the Minotaur debacle.

If you like minmaxxers, exploiters, or cheaty overpowered MC's... he will get there... eventually.  Probably.  Or he'll just get carried by the 'power of friendship' aka high level friends.

Relationships:  Realistic.  Considering the ages and maturity of the characters involved, this is not a high bar to clear.  Still, I respect the author for making a narrative that is signicantly wiser than any of the characters it contains.  Keeping up that dichotomy requires a lot of restraint.

Style:  The world is called Nyarlea, the mainland is called Nyartothep, and the first fruit we are introduced to is Nyapples.  This isn't exactly high class literature, and it isn't trying to be.

Grammar:  I haven't noticed any serious errors yet, probably because I'm enjoying it too much to pay attention.

Story:  It's honest about what it is.

Character:  I would rate this fairly high, but the characters haven't had the oppurtunity to define themselves yet.  This is realistic, considering the ages, maturity, and life experiences of said characters.  I expect this to improve over time, but we'll have to wait and see.

Feedback for the Author:  Keep on writing.  The best way to improve is practice.  As long as you let the characters have their own autonomy, and make their own choices, I expect your skills as a writer to improve over time.

Great storytelling, fantastic characters and a theme that appeals the correct mature audience. Sudden moves may be pulled too soon at first but unexpectedly manages to handle it well in future chapters, planting seeds for more. Everyone's A Catgirl may not have an original plot, but it sure does deliever for all the catgirl lovers to enjoy!

Not at all what I expected!

I wasn't sure what to expect with this story. Another trope-riddled isekai where truck-kun claims another soul? A Nekopara rip-off now with stat sheets?

Thankfully, it's neither. It's so much more.

Matt enters the world of Nyarlea with the expectation that it's like every other RPG he's ever played: useless NPCs, skipable tutorials, and catgirls at his every whim. But after the first battle he realizes that he has to take the world and its inhabitants far more seriously or he'll end up dead. I was very glad to see this transition. As others have said, Matt is pretty thick-headed the first few chapters.

I find myself sincerely caring about the characters and cheering for them when the odds are stacked. This is also one of the few stories I've read that have made me laugh out loud. The references to modern games and media are tactfully done, interspersed like Easter eggs throughout the chapters.

The pixel art in each chapter is gorgeous and unique. I've never seen anything like it in other LitRPGs. It adds to the immersion and makes me want an iPaw case for my iPad. The stats and level ups seem thought out and well balanced. There are very few, if any, grammatical errors.

Overall, this is an excellent debut for DoubleBlind. I look forward to each update. I strongly recommend giving this story a chance.

I believe in catgirl supremacy 🛐

Theres nothing else to say. I've always known there were fellow kindred spirits. Any story that incorporates catgirls is good in my books. Thankfully, this story is interesting, well written, and free from horrible grammar. There's nothing I could ask for, but more chapters!

Our brave MC, Matt, begins this story by passing to the great beyond after making a small, silly, and fatal error. After being presented with a small selection of worlds, he chooses to be isekai'd off to Nyarlea, a world governed by RPG-like rules and populated almost entirely by cute catgirls (understandable, in my opinion.) It's a fairly lighthearted and trope-y premise.

He arrives, and over the course of the first few chapters, he slowly discovers that surviving in this world isn't as easy as he thought it'd be, and he quickly gets his act together so he can help his newfound catgirl companions survive as well.

The girls Matt encounters are more than just waifu-bait, they're full-blown characters in their own right. You come to care for and adore them much like Matt does, and Matt himself becomes endearing through his relatability, resourcefulness, humility, and compassion-- oh, and because he doesn't come off as an OP self-insert harem protagonist.

Overall, Everyone's a Catgirl!, while presenting itself as a goofy harem isekai at the beginning, is a story you'll come to love through its humor, adorable character interactions, adventures, tension-filled moments, and worldbuilding. It's a charming story that takes tropes, flips them on their heads, and does it well.

Reviewed at: Chapter 2: The Beach

Excellent introduction into a new world. Readers and writers alike could learn a thing or two. The story is also excellent, with intriguing characters that grab your attention right from the start, and keep you hooked!

The world the MC is thrown into is simple enough, but it sticks true to its theme. Only 17 chapters in, I can already tell that this story is headed high places. The author writes like a seasoned veteran, letting us glimpse their experience with every carefully measured word!

Special kudos for the repeated use of character images for text dialogue throughout the story! A nice break from the monotony of other stories, and makes this work stand out!

This is my first experience with a LitRPG story, but I must say it's been absolutely fantastic and highly entertaining thus far!  The world feels well-realized, the bursts of action are exciting and fun to read, the main character is quite funny and relatable and the writing overall is top-notch!  Sidenote: a main character like Matt serves this story well, as his inexperience, confusion and dryly sarcastic approach to things serve to effectively put us as the reader in the story ourselves -- at least IMO.

Definitely give this story a read!

Reviewed at: Chapter 4: The [Brackets]

Good quality writing. Interesting premise and world. Just a dumb MC. Maybe he is dumb in a comedic way, I just personally don't like that kind of thing. I would still recommend giving it a shot and seeing for yourself.

Bland (i read until chapter 22)

I presonallly see the MC and side chicks as totally bland and mostly ... extremly ?adaptive?, espacially the MC.

It starts already with a certain being that reincarnates the MC and how she see´s the way he died.

Then our MC has choices were to reincarnet and why he chooses what is totally Noob/kid gamer like (no he isnt in a game).

Then forwad he is only singlemindedly doing thinks, without thinking at all.

The sidecharackter are bland espacially the first 2 and how they treat mc after almost dying twice is totally inappropiat for the announced difficulty of that world.