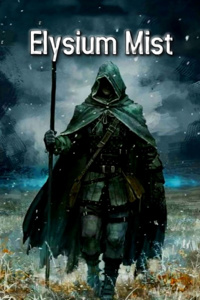 The rays of dawn passed through the curtains. Noah was lying on his bed face front. An alarm rang out jolting him from his deep sleep. Peeling open his eyelids, he stared at the ceiling.

He had a dazed look upon his face as he kept staring for good twenty seconds before registering his surroundings. Sitting upon his bed, he felt his body energized accompanied by a fleeting sense of mental exhaustion. The kind you have when you have just completed your first session of high-paced gameplay and beat the shit out of your opponents. The feeling of energy overpowering any semblance of exhaustion.

He was just ready to begin his morning routine by habit before last night's dream hit him like a truck and he stood up straight with a sharp look. Organizing it all, he sighed before finally mumbling something.

Noah was unsure whether to believe in his dream or not. He wasn't even sure if it was even a dream. It was all too extraordinary in the sense that it felt disjointed to him. He never had been a dreamer and all the dreams he could remember (almost none) had been a mess he couldn't make a sense of. So the fact that he could remember the dream exactly with apparently no gaps and could even recall the words he had spoken and heard from her were ringing alarm bells to him.

From where he could see, there were only two conclusions. Either he was seriously mentally ill with unknown afflictions ('cause who the hell dreams about signing a contract with a higher being and remember it afterward with absolute clarity') or the worst-case scenario where whatever he heard from her had been mostly or at least partially true and his world is on its way to get assimilated into the multiverse. For the first time, he was perfectly fine with the thought of being labeled as mentally ill by others since he couldn't imagine what would happen to his life in case he isn't. After all, there was no way this 'Integration' stuff would happen quietly without anything going boom.

Having no other source of information to confirm the truth, he was willing to believe that what she said was true for now. Now comes the important question, what should he do with this information? As there is no way he is going public with it. Authorities have no reasons to believe in his 'delusions' while there will be plenty of reasons for them to stuff him somewhere else to fix those delusions.

Most importantly, he was low on time with it happening today as per her statements. Speaking of her, he remember the last bits of conversation that happened as he tried to recall what exactly had happened for him to go out of his way to thank her when he didn't even know her intentions behind approaching him beside her own words. He couldn't quite put a reason behind his actions ever after scrutinizing the entire conversation. He moved towards his washroom on habit while continuing his thought process. Looking up, he peered at himself in the mirror. He was looking quite energetic today. Especially his eyes without the usual dark spo- Wait a minute.

Noah's eyes widened as he realized now why he did that. He recognized those eyes. How could he not when he had the same look on his face for years. Though he could somehow feel that her experience was incomparable to his to the point it would look insignificant. He also realized why he was so fast to put down his guard in front of her. In spite of the bravado she put on, the moment they signed the contract he could somehow feel her emotions. Not very clearly, but enough that he could make out her general mental state, and what stood out the most were two emotions.

He couldn't understand how she looked so fine when even a fragment of her emotions made him recall his worst days in his life where no one was there to help him and he was just wasting away until 'she' came to save him. Feeling his increasingly depressing mood, he jolted himself out of his thoughts and put them back to look at the more serious problems. He needed to at least contact his friends and inform them about the situation. He wasn't worried about whether they would believe him or not. It was just situationally better to be together in case of an unknown disaster.

Pulling out his call list from SA, he dialed the number of his best friend. Hearing the call being picked up, Noah started speaking.

"Shaun, yeah, there was something I need to discuss. Yeah, it's really urgent. Can you call any of our friends who can come by quickly? I am also on my way...."

In a Dimension present in the far reaches of reality. Located at the edge of Multiverse

The entire dimension was empty except for a single celestial object. Or more aptly put a Celestial Being. Without any frame of reference, it was difficult to gauge the enormity of the being. But those in its presence would have felt the raw power coursing through its body and would have immediately realized its identity.

Those Beings stood at the top of the pyramid in the Multiverse along with Gods, Dragons, and Transcendents.

If Noah was here, he would have recognized her as the titan lady he had made a contract with and whose name he now knew. Vanadis. Though he would have to try really hard to make the connection as she looked way different than before. She was not in her clothes but was covered in some sort of hard armor. Her skin showed veins glowing and coursing with mana. The only consistent feature present was her eyes. They glowed with even greater intensity than before.

She would have looked mostly fine if not for the numerous translucent chains binding and piercing her body. The chains seemed to phase in and out of reality with them disappearing for a moment and appearing at another from time to time. Even though the chain seemed to pierce her body, there was no sign of any injury as though their target is not the body but something deeper and hidden.

There was no sign of movement from the titan until suddenly her eyes broke out of the haze and gained clarity. With it came literal soul shredding pain to which she showed no outward reaction except for a minor frown.

'Well, that's done. didn't expect that to go so well. I was hoping it to take some more time. Though, That Noah was an interesting fella. Is it just because he was the first person I have interacted with in eons or some other reason. I should think about it later. Important matters come first.'

She then focused her thoughts and uttered in her mind.

[Quest: Legacy of Titan {Completed} - With the upcoming Integration, new talents and powers will come into play with plenty of opportunities arising. Pick your own Chosen to carry the Legacy of Titans and present it in the new world.]

Main Objective: Grant a Blessing to Your Chosen. Offer a Titan Bloodline to your Chosen.

Bonus Objective: Offer your own Titan Bloodline to your Chosen

Seeing the message floating across her eyes, she yelled out loud inwardly since she was still not able to move. Sensing deep inside herself, she could feel both her soul recovering back to original as well as her connection to Akasha fully restoring instead of a fleeting thread of a link she had before.

'It was the bonus objective that really threw me off. It literally increased the reward by orders of magnitude. Maybe it is because of my current status. Akasha always likes to offer difficult quests in such desperate scenarios since it provides much better records than normal. '

A familiar smirk appeared on her face as she felt power resurging and flooding her body. Though that soon changed into a frown when the chains attacked her soul with renewed vigor. Analyzing the situation in-depth, her expression was covered in gloominess.

'At this rate, It would take centuries for me to weaken the reality chains enough to try to break out of them. Even then, it would be a matter of chance. Argh, why couldn't it have given a body recovery along as a bonus. It would have made things so much easier.'

Grumbling in frustration in her mind, she tried to think of different solutions to tackle the problem but they were either uncertain in nature or too time-consuming. She was almost exhausted out of ideas until she felt a certain newly formed link attached to a central part of her soul. She felt a crystal lamp went on in her head.

'Could that be possible? I mean, yeah, It is a feasible plan. But it would be really reckless and bold.'

'Yeah, I love reckless and bold.'

Thoughts started churning out at breakneck speeds that would have left supercomputers in dust. These thoughts coalesced into ideas that together formed the outline of a concrete plan for the escape of the Era.