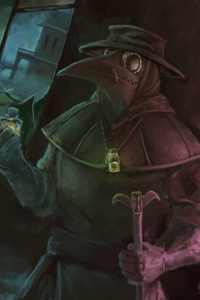 This book is a Pilot to see if the community enjoys it! Support is appriciated!

(High than usual Gore Warning, this book is about medicine, poisons, and potion brewing, which may contain content likely to gross out readers like blood, vomiting, general gore, and other potentially disturbing things. You've been warned)

With his widower father dying of a deadly disease, Xanthus Zeneger has made it his lifes work to cure him of his sickness, brought upon by a vicious assassination attempt after the war. That may sound like tall order, but add on the fact that Xanthus has found himself on the wrong side of the law, and it seems impossible.

But, when he falls into the hands of Prince Harkner, he soon realizes he hasn't been arrested, but given a quite miraculous chance to save his comatose Dad.

Join Xanthus and his goblin assistant Geoff as they try to piece together Harkner's motives and prevent a second, more steam-tech enhanced war between Ochamus and Erune, more terrifying than before. If they fail, Harkner will make sure Xanthus spends the rest of his days in a cell.

Uploads on Thursday at 1:00 GMT