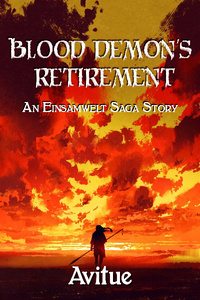 Chapter 35 - Champion of the Gods?

Explanation and action next chapter ;)

"For the gods to claim a champion in their name in the world is not an unheard case. However, to date history has no idea whatsoever what purposes these champions serve, for the known ones had never exhibited power beyond their means from before their appointment to begin with." - From "History of the Champions of the Gods"

Cal had done as she promised and escorted the village women and children back to their homes, where they were received with tears of joy, and many fists that shook in anger when their fellows heard what their kidnappers had planned for them. For her own part, Cal considered what information she managed to force out of the cultists back at the cavern, and she did not like what they implied, even if she took them with a grain of salt.

Unfortunately, what the information implied proved most likely to be true just the same night after she arrived at Barzum, royal capital of Ezram kingdom. Since it was already late in the afternoon when she arrived, she had simply asked the guard to relay a message that she would pay a visit to the foreign affairs minister the next day, along with a formal complaint about a certain Baron de Burgess. She had not expected an assassin to sneak into her room at the expensive inn she stayed at that very midnight.

Too bad for the assassin that four decades of civil war and elven sense of hearing meant she was a very light sleeper. She had not even bothered to arm herself and simply stabbed the assassin with his own dagger before she went back to sleep, and only bothered to report the assassination attempt after she had refreshed herself and dressed up the next morning.

She was dressed in full formal wear and even put on the signet ring while she elegantly sipped at a cup of Hartbloom tea - from her own personal stock - when an exasperated foreign affairs minister and his deputy came to meet her at the inn.

"I must say, I am most unimpressed by the hospitality your nation has shown so far, minister Fargo." She said, her tone stern much like a military officer reprimanding a subordinate. To affect the tone of a haughty noble would probably have worked better, but damned if she had any idea on how to do that.

"O-our most sincere apologies!" Said the minister, a balding, middle-aged chubby human named Nicodemus Fargo. Even if Cal were not from a nation notably stronger than his own in every aspect, it would already be gross diplomatic faux pas for one of their nobles to commit such offense to a foreign dignitary. And that's with last night's assassin unaccounted for yet. "P-Please rest assured that such incidents will not happen again!"

"Are you referring to the fat noble, or the assassin that bothered my sleep last night?" She countered. From the dawning horror on his face she could tell he probably was not briefed on that incident yet. "Animosity between nations had been started over smaller matters, as I am certain you're aware of."

By the time the minister left the inn fifteen minutes later, the man was thoroughly chastened and drenched in sweat. Cal may have not enjoyed politics, but old Halmout had been quite adamant in ensuring that she knows her way around it.

Either way, the presence of the assassin last night made the implication that some figures higher up in the Ezram government might be in collusion with the cultists more likely, unless somehow they had been able to track her presence without her knowledge. A much unlikelier possibility. The public complaint she made just now, she meant to serve as a distraction, for she had intended to do something more covert in Barzum.

Namely to check if the information she gained from the cultists that the supposed "Champion" of the gods were in the main temple for Austrofuri was true or not.

Later that night, Cal had left the inn and would have seemed to observers to simply have patronized the local food stalls, before she took a turn down a small alley and simply vanished from sight.

What she did was to simply run through several more small alleys at inhuman speed, and once at a secluded space, switched the bright yellow summer wear she wore for a set of dark blue trousers and tunic. Her alabaster skin would be rather glaringly obvious in the night regardless. For the same reason, she wrapped her hair in a bandanna and smeared a slight coat of brown foundation powder over her face.

She simply toured the streets of the capital afterwards, most observers who did not know her personally were likely to just mistake her for a wood elf from the south, where they tend to have tanned skin. She simply acted like a tourist looking around the place, and even entered the main temple openly to have a look and pretended to pray inside.

Much later in the night, she climbed up a tree next to the back wall of the temple when there was no one to look. What she could see from the temple complex was that they had several smaller buildings separate from the main temple. And that there were many acolytes on guard even at this hour of the night, with their efforts apparently focused around one building in particular.

What was particular was how the guards were arranged as if they were there to guard for an escape attempt, instead of for intruders. The fact that the particular building had iron bars on its windows further reinforced that hypothesis.

How to get inside proved a minor quandary, one that resolved itself when she spied a rather opulent carriage stop in front of the temple - a curious time for a visit to the temple - and half the guards were apparently called over to the main complex. Cal took that opportunity to sneak in on the unguarded side of the wall and made her way towards the barred window.

The iron bars were quite thin, and not even made of that good a material, which made it easy enough for Cal to make a gap barely large enough for her to squeeze through while making next to no noise. Inside the building was a relatively well-furnished shell, and what seemed like a pureblooded human held prisoner, who looked at the intruder to his prison with trepidation and hope at the same time.

"So, whoever you are, why would a temple keep you confined here, hmm?" Cal asked very quietly at the young man. Now that she had given him a closer look she noticed that the young man wasn't human, merely looked extremely close to one. Subtle signs were present that hinted of a wildly mixed ancestry that somehow combined to his nearly indistinguishable from human looks.

"Name's Ergan Zauz, milady, bard by trade." Said the man with an equally quiet voice that failed to hide the melodious qualities of his voice. Combined with his classically good looks he would likely be a charmer for most women. "And to be honest, I'm not sure either. One night I was drinking and chatting with patrons in a bar, and the next day I woke up in here."

"A couple times they had me paralyzed and sat me down on a throne where this bunch of lunatics called me some champion or something, I don't even know what's going on!" He added, somewhat exasperated. "The freaks were all about this human supremacy ratshit and I don't even have a shred of human blood in me! Not that I ever dared to tell them that…"

"Wait a moment, you're the supposed Champion of the gods?"

"Err… I dunno? Does having some weird-ass dream where some green figure made outta wind tell you you're his champion from now on counts? 'cause that's the closest thing I can offer."

"Let me guess. You told that story to others while drinking before you got brought here?"

"You're quite the spoony bard, aren't you?" Said Cal, one palm covered her face as she figured out the situation.

My Patreon is officially open! For 5$ a month patrons will gain early access of up to 25 chapters ahead (Current Backlog: 25).

Thank you for reading, and stay tuned for more tomorrow, at the same time, same channel!