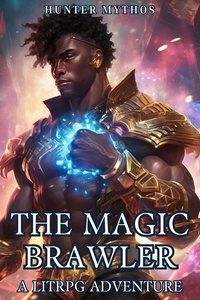 The story starts out pretty interesting, the the main character is relatively believable in the first chapters.

Grammer is good, no obvious spelling mistakes and a nice flow.

Its a pretty generic litrpg with a few interesting elements. But what lets it down are the characters. The main character starts out quite intersting, and having a boxing focused story was nice compared to the usual sword or two daggers stealth speed focused hero. But he swiftly turns into your generic white knight OP author self insert with extra special titles and bonus stats etc.... and becomes boring.

The second character is a kind of lizard man and is the only truly intersting charcater in the book so far. He's the only one i feel it would be good to hear more from and how he percieves the world compared to the humans. He clearly has some inner conflict over the role of predators and prey and it would be great to see that develop more.

The last character is clearly the worst of the bunch, a typical, no name, pyschotic female assassin that is just sooooo skilled at killing things sneaking and generally being badass and is definietly being set up to be a romantic interest its completely killing my interest in the story. I mean she has no endurance points yet can carry on longer than someone with a ton of them. If characters are going to specailise at something to the degree she did they should literlaly suck balls at everything else, otherwise why even bother with the litpg genre.

Hey you never know the author might do something different and kill off this budding mary sue and make this an enjoyable buddy novel about two guys from differnet worlds fighting for what the belive in. I am going to keep reading for now in the hope he does XD

The first issue is the very misleading picture.

I thought the protagonist was a female elf... ;)

The second issue is having what seems at the start to be a rather dim-witted protagonist. Anyone who can't distribute his own stats in a game without a living tutorial is lucky that breathing is an autonomic action.

Girl assassin is a really overused trope to boot, and it's not used all that well.

A story with potential and entertainment.

Reviewed at: 18. The Young Mistress

Overall: I think the story is a fun and entertaining premise taken and molded in a way to be a little unique in its own way. It certainly isn't a trailblazer, but it does enough to not feel stale, and makes me want to keep reading to see what happens next.

Style: I wouldn't say the story telling style does anything too crazy or mind-bending. It is a comfortable 3rd person narration style. Some edits and jumps in perspective change that. With different levels of success, though never terrible, some feel a bit...off.

Story: So far I like the story and the odd little tidbits we are getting dropped as hints here and there. It makes me want to learn more and tear into the meat of the mystery. It isn't so mysterious I am unaware of it, but it also isn't so apparent it isn't appealing. So bravo, I think the story has some amazing potential.


Character: While writting this review I have changed this score 3 times, because every time I think of the characters, my opinon of them drops. I really dislike 1 of the characters and their 'trope'. I also don't enjoy the MC's lack of consistancy. However one of the characters is very interesting and I want to learn more about their world and life. Overall, 2 out of the 3 characters at this point leave stuff to be desired, but the potential for growth is there.
also, while I dislike the trope and its cliche nature, I am sure other people will really enjoy it. Otherwise it wouldn't be a trope.

Conclusion: While I have my gripes, I do think it is worth a read and I am looking forward to how the Author develops and continues the story. I see the makings of greatness, and hope to see more in the near future.

A good read. You're along for the progression ride, which I always appreciate, though what the numbers mean isn't straightforward. The characters are all immediately identifiable and distinctive.

The grammar isn't perfect, but is better than most books on here. I like the whole intrigue being alluded to in the beginning for a hook without an outright reveal.