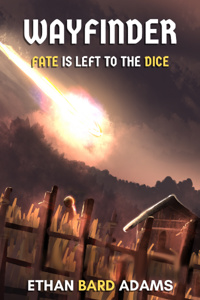 This story is about El. A Level 1 player character made with the Pathfinder ttrpg. For those wondering he is a commoner, I did use 10 point, point buy. I do use the elephant in the room rules as well as a tiny bit of homebrew.

I really just wanted to see the journey of a commoner and the friends he makes among the way. This story was also written with a friend. I greatly thank Taibot for the motivation and help writing this.

If you want to see more or talk to me about the story the easiest place to do so is my discord. Feel free to let me know if you like the story or want to play some tabletop games sometime.

El spends his next morning meditating, although his thoughts are filled with dreams of adventure. He goes to the farmer's house for breakfast then out to the farms to clear another stretch of a field of rye.

Smoke plumes from the other side of the farm. Fire engulfs the mill. El runs through the fields going towards the mill. His feet carry him faster than he expected. His head spins with worry. What started the fire? Is anyone in the mill? Will Arkin be able to rebuild?

El runs past the barn grabbing his shovel by the door and as he rounds the corner the mill comes into clear view. A broken lamp near the entrance spreads flames across a pile of straw leaning against the mill. The fire leaps onto the building but spreads slowly from there. El runs towards it, slams his shovel into the dirt, and flings it at the fire to little effect.

“Water boy, get water from the well!” Arkin yells.

“Right,” El replies before heading towards the well as quickly as he can.

El works with the others to put out the flame. The damage is mostly contained to just the straw. Arkin sends for a carpenter and they debate on the cost of repairs to the mill. The small amount of damage does compromise the integrity of one of the town’s biggest structures; the grain mill. They settle on twenty gold for repairs.

El runs to the barn and grabs his own gold to pay for the repairs. He returns with the gold to Arkin shaking his head.

“Go put it back, kid. I can cover my own fees,” Arkin grumbles.

“I have the cheapest rent in town. Let's just say this is coming out of the security deposit I never paid.” El hands the gold over to the carpenter.

“I’m paying for the damage. I could have stopped the fire earlier and I didn’t. Let me just feel good about this.” El drops the money into the carpenter's hands who gladly takes it and starts counting the coins.

“Fine, what started that fire anyway?” Arkin turns with his arms crossed.

“A lantern in the straw pile,” El says.

Top walks over and picks the lantern up with his sickle. The metal is hardly warped from the flames, just a bit blackened. Top wipes away some of the ash and the metal shines bright.

“Who’s lantern is that?” Arkin grunts.

“The metal’s not even glowing, but it sure reflects sunlight.” Top shrugs.

El twiddles his thumbs sitting on the edge of his bed. If the lantern came from the knight then the adventurers lit the mill on fire. Were they trying to burn it down? Did they want to deal a critical blow to our food supply? Why would they even do such a thing?

No. It couldn’t be the adventurers. Did he have that lantern on him when he left the warren?

El couldn’t remember if he did. He must not have. A kobold must have lit the fire. But a kobold sneaking into the town in broad daylight? That was impossible. There has to be clues. The young man goes down to the mill.

El follows three sets of tracks in the soft earth further into town. He loses the tracks as they cross the road into the town center. There’s the town hall, church, general store, the smith, and the stables.

El runs towards the stables. The cart and driver are already gone. The cart driver's cousin is still here trying to carve the hub of a wheel.

“Philean, who just left on the carts?” El asks.

“The adventurers that were in town.” Philean doesn’t look up as he replies.

El grits his teeth. Saying something could make enemies of people he didn’t want to mess with. And he didn’t yet know what happened or why it happened.

“Huh?” El looks up, coming out of his own thoughts.

“Daydreaming? Did you really want to meet them?” Philean smiles softly.

“Ugh, yeah. Yeah, I did want to meet them.” El shrugs trying to shake off the terrible feeling he has.

“Next time kiddo.” Philean turns back to his work.

“Sure.” El shrinks away from the stables and heads back towards the barn.

El has dinner again with farmer Arkin. The farmer’s wife, Helen, mentions offhand that the rats are getting back into the silo. Arkin grumbles and says he will set traps tomorrow. El takes a bath after dinner and then heads out towards the barn.

He stops at the entrance to the barn. He looks over at his spade. He failed to do anything useful with it today. He couldn’t put out the fire. El grabs his shovel and heads over to the silo. If he was going to be anything in life. He was going to be a ratcatcher.

El wipes the blood off the edge of his shovel and strings up his eighth rat corpse. His hunt had been successful, but he would have to sleep in past breakfast to not fall asleep doing field work. El headed away from the silo to go back to the barn.

There was no use in him making enemies just yet. El needed more information and if need be he should be ready to defend himself.