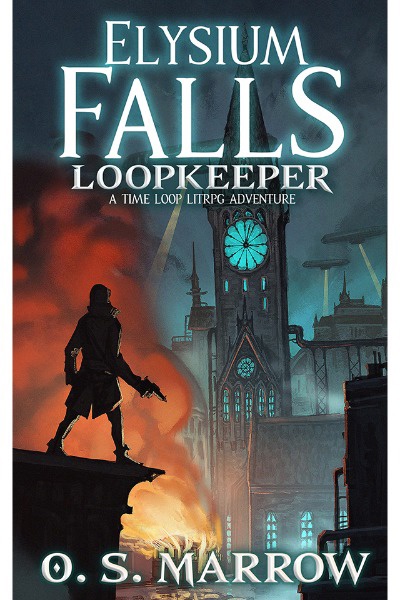 "We know how it ends. We know how we die. And then the Loop begins anew."

On the thirteenth day of Harvest, a mysterious woman enters Haven’s house of government and unleashes a devastation unlike anything this world has seen before. Lonely police recruit, Sham Tilner, is caught in the blast—and is thrown back in time armed with nothing but a Legendary new skill.

As Haven’s only resident with memory of its devastation, Sham must navigate the murky streets of his fragile city to confront this would-be terrorist before she can unleash the unthinkable.

But an investigation like this is never so simple. Dark cabals sell black market skill vials in the shadows. A strange new church pulls zealots from all walks of life. Trained operatives pursue Haven’s future saviour.

And the voices in Sham’s head seem to be getting louder.

Updates Mondays and Thursdays. Note: Temporarily once a week.

Just discovered this earlier today and I've already binged 10 chapters. It's good - really good - and definitely in the top 10% on RR in terms of writing quality. I'm loving the characters and dialogue, the setting, and the narrative use of "show, don't tell". Try it - if you love litrpg, especially unusual systems with great writing, this is for you.

Reviewed at: 43. Living A Life Outside The Loop: A Montage

Loopkeeper a "time-loop mystery" story, similar to Mother of Learning or Reroll. The main character finds themself in a time loop that ends in a catastrophic event, tries to stop it, and ends up in a tangled web of plots and intrigue. The major difference in mechanics is that it is relatively easy to gain the permanent ability to retain memories of the previous loops. This means that each loop differs wildly from the last, as dozens of people (including some in positions of power) are loopers. As such, there is much less of a looping feel to the story---even if there are a few events that remain constant, so much changes that the plot feels more linear. This allows for a lot more character growth and long-term plans.

Marrow's prose is quite good, and spectacular by RR standards. My only complaint is the interruptions of skill checks. There are low-key litrpg mechanics, where everybody has a few skills that affect their ability to perform specific tasks or feats. Sometimes characters are influenced by skills without it being mentioned, and sometimes there are "skill-check" paragraphs where a skill is explicitly checked and either succeeds or fails. Not only are these skill-checks inorganic, but they don't appear consistently or in a consistent format, and their mechanics are never adequately explained. If no skill checks occurred, I'd be happy with a hand-waved explanation of how skills work (I'd prefer this, in fact). But the skill checks do occur, promising a concrete system behind the litrpg mechanics, which isn't delivered.

It's great. Very few typos, and always understandable despite any typos. All dialogue uses single quotes, which makes it a little less readable for me (edit: apparently this is common in British/Australian English).

I've touched on this in the introductory paragraph. Lots of interconnected mysteries, and the story is still in the "more questions than answers" phase. The main character is kinda stupid, and at times I feel like I'm way ahead of him. Of course, most of the things I think I have answers to haven't actually been anwered by the plot yet, so I might just be way off base with my guesses. I'll return to this point after more of the story is written---it might be a goldmine of dramatic irony, or it might just be frustrating.

As mentioned in the introduction, there are a lot of looping characters, which makes interpersonal relationships much more feasible than in most loop stories. Marrow takes full advantage of this with several fleshed-out characters besides the protagonist, and lots of different factions with different agendas.

In conclusion, while Loopkeeper shares several characteristics with other loop stories, it has a different feel from most, avoiding some of the pitfalls of the genre. Even if you don't normally enjoy time-loop stories, give this one a try.

an awesome story so far with loads and loads of questions to answer and the main one is where are all the comments? This story is really really good, with a cool mystery, an interesting system (but one you gotta workout for yourself a lbit) and characters who arent just like immediately good at everything.

Reviewed at: 49. An Interlude: Asa Might Just Be In Over His Head

you know when you see a rogue in a story and there just a stock protagonist whos apparently charming and extra flexible. Sham isn't that, he's a depressed adict who through random chance ends up in a situation far beyond him, with nothing but social inteligence to pull him through. I like him a lot.

The story handles class struggle in a believable and mature way, no one comes across as a strawman.

The world is fleshed out, you come to understand the city and its factions and the system fits into it neatly.

Honestly it's really good and I'm surprised it's not more popular than it is.

Good stuff here. Story goes full throttle right from the beginning and it's a bumpy ride with not a boring moment in between. The characters are brilliantly fleshed out each battling demons of their own. The world seems dark especially when seen through the eyes of the MC. Protoganist starts out as a hopeless drunk but grows on you as he struggles to redeem himself. Definitely one of the top reads in rrl!

One of the Best

Reviewed at: 26. Please Sir, Can I Have Some More?

Honestly, Loopkeeper is one of the best stories that I've read on here, and potentially one of the best stories I've ever read. That said, it clear is borrowing from the greats; the Disco Elysium vibes are off the charts, but there are enough other influences in there to keep it from being entirely derivative. In particular, I'm a huge fan of Riot as the main recurring secondary character, she and the main character, Sham, have a wonderful dynamic that helps to enrich both of their characters.

I'm really interested in seeing where the skill system develops from here, the litrpg elements are used quite well in my opinion. If you haven't given it a look, I strongly recommend you do so!