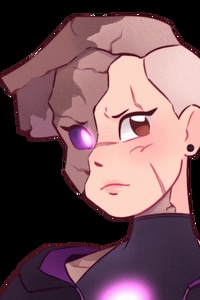 Remove Ads
Previous Chapter
Next Chapter
A note from Thedude3445

Golemancer finally fell off Rising Stars, probably forever... Next stop, Popular This Week! Please leave reviews and (more importantly) comments so the story can reach more and more people. I think the next week of updates is gonna be really exciting.

Back in Orctown, wandering the streets and taking in the atmosphere of a neighborhood so different from Beechhurst or the Red Light District or any other part of the city Amelia had visited thus far. The Coliseum jutted out in the sky, looming visibly no matter how many blocks away she walked.

She had returned to this place for the exact same reason as before—information and help. With a useful, hopefully expensive box in hand, she traveled one more time into the store called “Last Call For Gear.” A chime sounded the moment she opened the door, and that orange-hued imp poofed into view in front of her.

It flew around excitedly and said something like the demonic tongued version of, “Welcome back!”

The inventory at this shop had changed dramatically since the last time she was here. There were considerably more weapons, including an axe that looked suspiciously like the one Phelia left behind in Floor 3 during their dungeon dive. Items with Fourland Growth Corporation logos branded on were also in great supply, including shirts, shields, and mugs. Almost like a whole gift shop in here.

The orc, Urgul if Amelia remembered the name correctly, stepped out into the front of the store, pushing his cane with every other step.

He instantly recognized her. “Ah, it’s you again. Never thought I’d see you come back around this shop.”

“Apparently so. And it looks like you have, um, a box?” He fiddled on his tiny glasses and peered at it closer. She offered the box, and the imp went and grabbed it—only to sink down close to the ground as it struggled to carry the thing over to its master.

Urgul took the box and examined its labels. “A brand-new, still-in-packaging color camera. The hell are you carrying that around for?”

“This very expensive camera you legally obtained but never opened, am I getting that right?”

“I see.” He considered it for a moment and appeared to think about whether or not to throw Amelia out, but in the end, he accepted it. “Five hundred silvers.”

“And just why will you do that, young lady?”

The orc and the imp exchanged glances.

“Or rather, are you still in the business of answering questions honestly?” she asked.

“I might be.” He waved his hand and the imp poofed away. “You know I’m no power broker. I’m just an old orc who’s still got good ears.”

“Well then, what’s four hundred and fifty silver really worth to you?”

“Nothing too complicated.” Amelia looked deep into the man’s eyes to make sure he was hiding nothing, to make sure he was not the type to sell out a person just to keep all sides happy. To the best of her ability, she could not see a single duplicitous bone in his body. So asked away she did. “Tell me about Fourland again. How’s the synth trade now?”

He chortled. “’Course you’d ask that one,” he said. “Well, wouldn’t you like to hear, but Fourland’s closing up shop.”

“Did you hear about that explosion on Floor 2 of the dungeon? North Sunwell authorities found it was caused by an explosion of some drug storehouse. Turns out they’d been running a big operation the whole time, a big surprise to everyone. No one could have ever expected that a large agricultural corporation would be hiding such a big, illegal operation. Had to arrest the whole leadership team, and the CEO’s gone straight missing.”

The man threw a Fourland-branded mug Amelia’s way. She caught it around her fingers by the handle. Then she set it on some random shelf beside her.

“Of course, a much better answer might be that Fourland had some real nasty ties come to light. Ties to Fleet’s Pride. You know of them?”

“Ah, then, let me tell you about Fleet’s Pride,” Urgul said. “Rebels against North Sunwell. Student protests, at first. Then they got gunned down in the streets, and the old leaders were arrested and executed. You’d think they’d give up there, but no. Ever since then they’ve gotten stronger and angrier. Pockets of resistance in the countryside, building up something fierce. Bomb attacks every now and then in Fleettwixt. Rigged up golems that just blow. Usually it’s at military or police targets, but there’s always civilian casualties. I don’t think they care anymore. It’s war.”

This confirmed everything Amelia suspected about Fleet’s Pride, and made it more understandable why that Borguk man would be making deals with notorious drug lords; anything to fuel the cause was good enough. But there was one thing that seemed quite strange.

“Why do I never hear about them?”

“What, do you think the papers are fair and balanced?” Urgul scoffed. “They cover it up, just like they did when you destroyed their big facility.”

“Sorry.” He smiled. “When some ‘mysterious, unidentified person’ destroyed their big facility.”

It was actually two mysterious people, but for some reason, it seemed like Hummer was getting absolutely none of the attention. Perhaps because she was not the one who literally murdered much of Fourland’s executive board with a couple well-thrown knives.

“But,” he continued with a somber tone, “The drug trade didn’t die. Synth dealers just went independent. One company’s fall becomes many gangs’ spoils. The supply’s lower for a while, but that just means higher prices. Nothing will change except where they’re getting the synth from.”

“You don’t look pleased to hear it.”

“No. It makes me want to harm people.”

“But you have more pressing matters, it looks like? Another question?”

Amelia paused, then nodded. “It’s not actually a question. A request.”

Urgul snapped, and then his imp poofed back into the shop. It sat on his right shoulder and stretched out its limbs. “Request away, young lady. Just know I trust you about as far as I can see you without my glasses. That is to say, not very much.”

“You’re a retired summoner, you say. And you’ve got a lot of magical contacts floating around, surely.” She waited to see if his interest was piqued, but strangely it did not seem to be. “I need a specialist mage by my side. Someone who can help me track down a target. Let’s say it’s a purse I lost.”

“A purse that might just send spells and bullets at you if you get too close?”

Urgul smiled broadly and shook his head. “Young lady, look at me. I’m an old, fat geezer. I’ve been retired going on twenty years. If I come across any purses, I don’t know if I could even avoid them.”

“Your price is out of my range, you’re saying.”

He narrowed his eyes. “Perhaps.” He turned around, as if to consider their conversation complete, a cue for her to leave. The imp even waved goodbye to her face. But she did not go. She stood still and firm.

After a solid minute waiting, Urgul turned back to face her. “You are right about one thing,” he said.

“I have a lot of magical contacts... ‘floating around,’ as you put it.” He put up his index finger and tapped it on one of his tusks. “I might know someone who has been asking for more work recently, and I might know how to arrange a meeting. But.”

“I’m not so sure you two should be together. You’re a lot alike.”

“I can work with alike.”

“No you can’t,” he said, baring all teeth in a giant smile. “This contact of mine is very, very picky about work. How do you know they’re interested?”

Amelia pulled a full, large soul gem out of her jacket and tossed it into Urgul’s already-open palm. “Send that. Tell them it’s an advance, and there’s a lot more where that came from.”

“I think I can arrange that,” he said. “Come around here again in about week. I’ll have you a good meeting location. Somewhere public.”

“Then we’re done here.” Amelia turned around to leave, until Urgul placed a hand on her shoulder. Surprisingly, she did not rebuff it as quickly as before. But she still put her hand over his and brushed it off. The imp sat on her other shoulder for a second before she glared at it and it flew off in fear.

“Young lady, you might want to consider thanking me before you go off.”

“Thank you,” she said mechanically.

“There’s people out there that really want to hurt you and everyone you care about,” Urgul said. “Have you heard the name Dimples?”

Amelia left the used goods shop feeling stronger than ever, ready for whatever meeting Urgul would arrange with a magical cohort. Her optimism was sky-high, likely because she was not expecting the old man would reunite her with someone she already knew.