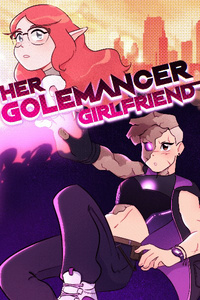 Amelia stepped out of Highden Station once more for the next stage in her path to revenge. She had shelter, she had determination, and now she would obtain information.

Where was Ed? What was she doing? And how was the Fourland Growth Corporation connected to any of this? All difficult questions, but ones she would progress through in this shining second day here in Fleettwixt.

The only clue she ever received to Ed’s whereabouts was a single file buried deep within her system. A map of Fleettwixt circa five years ago. There were no clues in the image itself—trust her, she had examined the file more than anything else in the world but that sole close-up photograph—but obviously she wanted Amelia to come to this city for a reason. If, indeed, she wanted her to be here.

Amelia did not have a clear plan, but she had one very good idea for a first step, if only she could find a golem worth picking out.

So, with a hood over her head, a mask over her face, and sunglasses that mostly obscured the glowing purple of her false right eye, she prowled through the morning streets.

She looked around at her surroundings, just taking in the city sights. Highden in morning, the pinnacle of Fleettwixt gleaming like a beacon to the worlds beyond their own. Two young gnomish women strolled down the lane, arms locked together and giggling. A posse of two dozen kappa tourists, shopping bags in tow, hurried over to the nearest duty free shop. A naga man slithered by and gave Amelia a curious expression, then a friendly wave.

What a city Fleettwixt was. Glossal beings of all shapes and sizes lived their daily lives in relative harmony. Shining buildings towering on every block. Everything smelled a little funny, with all the burnt-off mana, but in looks the city remained unmatched.

But, of course, all the beauty and prosperity came at the cost of the world around it. The rest of Sunwell was stripped bare like a second-rate colony—because it was one. The people, those lucky enough to escape subsistence farming, were subjected to brutal conditions and the destruction of their homes, all to feed the machine of progress created in this beautiful place.

Amelia saw what happened to her home. She saw the destruction wrought in Rockmund, in her village. What happened there would soon happen here, too. She was sure of it. The North Sunwell Company had not merely taken over the continent with its economic engines of power; it had deposed the entire Sunwell monarchy, leaving King Ingvar IX a powerless figure in unofficial exile overseas. The Royal Castle remained little more than a tourist attraction, to someday be demolished to make room for more high-rise buildings. Everything good about this place would eventually be removed in the name of profit and progress.

If she had to burn the whole city down to get revenge, then so be it. Let the beauty melt away and reveal the stinking coal beneath.

As for her first step in finding her girlfriend...

Well, Ed was a golemancer, and until they ran away together, she had worked for the North Sunwell Company’s Research & Development Department. Something of a prodigy, they always said, and her ingenious plan to fuse Amelia’s ancient soul core with a human body was the only reason Amelia even stood here today. If she was back in Fleettwixt, she was likely working for North Sunwell again, doing what she knew best. Even if she did not want to, the company had its ceremonial hostage system, and Amelia’s father would be just the incentive she needed to once again pledge loyalty to the colonizers.

Amelia COULD go over to the North Sunwell Campus, rush in fists ablazing, and attempt to rescue Ed. But if her experience in the research center in Newpool was any indication, that would be the single most useless thing she could ever do. Not only would she be one against a thousand, not only was it so massive it would take a day to explore every nook and cranny looking for her, but the entire campus was likely covered in magical nullification devices that dampened mana or outright sealed it. She would be captured, dissected, and turned into some new weapon for future triumphs in conquest.

So what was the next best thing for finding evidence of a famous golemancer’s location? Studying the artist’s creations. And if there was anything Fleettwixt had in supreme abundance, it was golems.

Colorful advertisement billboards up in the sky showing mixed-race families with a golem serving them a meal. Golems carrying heavy crates down the street with careful precision. Pocket sized assistants resting on the shoulders of those with money to burn. These creations were absolutely everywhere, and it was nothing at all like she expected.

All golems she had ever met until yesterday were made for battle or for labor. Combat units. Guards. Medics. Farming assistance. The idea of a golem helping around the house was something out of a utopian storybook. But it was all here.

Amelia, being a golem herself, wished no harm on these beings. They were her lesser-minded siblings, not complex enough for independent thought, for glossal communication, but still living creatures of their own. They had memories, they had experiences. They actively avoided harm unless given directive not to. And, unfortunately, they were perfect for giving her clues as to Ed’s whereabouts.

Even though she felt bad about it, she selected her target: One golem standing guard, perfectly stationary, in front of an unmarked building. It was the classic clay shell model—a medium brown shade, one color; eyes that glowed a dim purple up from the soul gem in its chest; thick, trunk like limbs; and an impressive seven feet in height. A perfect specimen of intimidation, but also not so imposing it struck fear in the hearts of those who passed it by. Designed to keep its shape solid and pretty, not to gather up all the sediment that passed it by like a traditional golem.

Amelia stepped up to the guard, and it did not shift its stance at all. Even though it surely could scan her and sense her overwhelming power, it did not sense the level of threat needed to respond. Golems were incredibly specific about responding to their directives, and this one’s was probably something like, “Guard this building and protect it from any and all threats.”

If it wanted a threat, though, Amelia could give it. She activated her Combat Module. Her eye lifted up, and she began to exude mana at a much higher rate than normal.

Let’s burn off some excess energy, she thought to herself. And, of course, her system responded:

She ignored the warning, removed her sunglasses, and flashed a load of mana from her body, uselessly exuding as much energy from her eye and everywhere else.

The golem sprang into action immediately, moving so fast one might think it was made of melting cream, not hardened clay.

She dodged its arms that attempted to grab and apprehend her, and took off running as fast as she could to the nearest alleyway. All along, she kept burning off her mana reserves, just to keep its attention focused on her. The golem probably had a certain radius where it would stop following, but she could override it if she kept its mind focused on the threat.

And it worked. The golem followed her down the dead-end alleyway, stomping forward in full rampage mode. She shut down the mana burn and turned around.

“I’m really sorry about this,” she told the thing right before she raised her fist and aimed it at its chest.

A simple punch. Her stony right arm made contact with the golem’s clay torso, and it sent a wave of kinetic energy rippling through its body and cracking it into a million pieces. Its body crumbled and collapsed so quickly that its feet kept running a couple seconds before they, too, finally fell over on the ground.

Sometimes Amelia wished her opponents were more challenging, but oddly she appreciated the opportunities to really show off, even if no one was watching.

She bent down and picked up the only part of the golem that really mattered—its soul gem. This tiny little black-and-purple stone of immense mana capacity. It was endlessly impressive that anyone had become clever enough to create such a powerful tool, let alone that it had become a profession practiced by thousands around the known world, let alone that somehow Amelia Bluewood had been created with that very same process.

Now that the golem’s body was destroyed, Amelia decided to put it out of its misery and absorb the soul energy into her own core. She touched the gem against her chest and felt the tingling of energy pouring into her. Not much—the golem’s source soul was probably livestock or game animal—but enough to make up for the mana she frivolously burnt off to lead it into this alley.

And rather than simply absorbing it, she chose the more thorough option: Soul incorporation.

With longer-lived beings, she could probably only pick up on fragments or possibly be forced to reject certain parts of it to free up space. She was unsure, because she had never tried. In order to keep her soul as pure and Amelia-filled as she could make it, she refrained from soul incorporation as much as possible. However, this simple guard golem had very little presence of its own, so she did not bother to worry about it.

She peered into its life and felt its experiences up close, as if they were a part of hers... So much of its life was spent simply standing in one spot. It had never seen much action in its six months of life, just an expensive paperweight sent to guard, well, whatever it was it was guarding.

It ran a system remarkably similar to her own high-level operations, just a magnitude simpler. It had access to its own diagnostics and memory banks, and even had a snapshot function—100 snapshots at a time, compared to the twelve that Amelia’s flawed prototype of a system was able to store.

Nothing here was particularly interesting, or particularly good information for her quest. It gave her further insight into the city of Fleettwixt, but that had nothing to do with Ed.

For a good second, Amelia thought she had failed, that she had destroyed an innocent golem and walked away with nothing but scrap to sell. That was, until she came upon the manufacturing data.

Yes, indeed. This golem was built and imbued six months ago, right in one of the golem factories in the west of the city. It was a shell model, mass produced with a simple directive and stock system, and all of that was designed by... Dr. Edith Winback. Exactly what she was looking for.

Today I'm going to ask you to read KrazeKode's Truth Seeker. A time loop LitRPG! Wait, we already recommended one of those? Well, I have a feeling that this one will work for you just like Blessed Time.