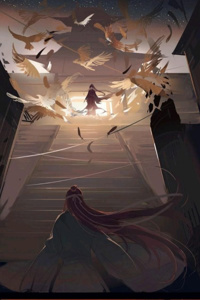 The Wu Clan's Rise: Legends of the twin dragons

The Blood Continent can be described as such and much more.

The Blood Sect was the strongest power on the Blood Continent and they were the most infamous heretic sect on planet Daiyu.

To show how harsh the conditions in the sect were; they would purposely limit the cultivation resources for their disciples, and encourage them to fight against each other.

The sect's motto was, "Only the strong will survive, trust no one but yourself, if you want something, kill for it."

From that alone, one could see that they follow the rule of the jungle, where only the strong will survive and the weak would be killed.

Even though the sect had rules for killing between disciples, as long as there was no evidence incriminating the killer or the person killed wasn't a top genius, then the sect would most likely ignore it.

Throughout the entire Blood Sect, disciples could be seen fidgeting while their eyes shifted about as if someone was going to jump them from behind at any time.

They were constantly on guard, keeping a distance from each other as they walk to and from their destinations.

On a random rock, next to a main path within the sect, a poor cricket decided to make a stop there and started its mating call, but not even a second before it started, it was slashed to death by a blood disciple.

"What the fuck?! I thought someone was attacking me from behind!"

That disciple was only walking past the rock and had reflexively attacked in the direction of the noise behind him. He was so vigilant and paranoid of some attacking him from behind that he mistook a cricket noise for a sudden ambush...

*Continuation over on Goodnovel, please support me*

Bio: Amateur writer here, I have an account on Goodnovel and Webnovel, but my main focus is on Goodnovel. I came here because a friend recommended this site to me, and I said why not, I could reach a wider audience, so here I am.