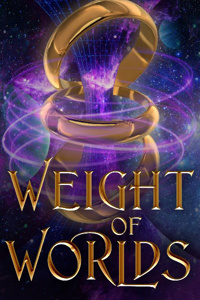 The Tethered wield many talents, which they each develop into a hundred unique paths.

After Ranvir awakens the ability to control space, he discovers he is the sole Tethered to hold this power.

His only chance is to attend the Royal Academy and become his own Master. He will turn his burden, into a blessing.

If you like slow paced progression fantasy that takes its time exploring the magic system in-depth, then Weight of Worlds might be the story for you.

I understand slow burn, but this is insane..

Reviewed at: Chapter 20 - This Doesn't Seem Like a Proper Exercise

I've read a lot of slow burn novels, and they take a while to get to places, but they're still entertaining all the while.. This story just feels like a lot of nothing is happening... I'm sure something will happen eventually, but i'm not sure I can get myself to that point.

So I get that the author is trying to make the MC start out as nothing special, but then becomes great with effort and time.  The only problem is that most authors have trouble developing the story, as this one is experiencing.  From the first 10 chapters so far, I haven't seen the MC developing at all, in either personality or strength, just more inferiority complexes and how his friends are more talented than him.

Often fails to hang together, don't think too deep

So, full disclosure. I did read all 40 chapters (all that were released at the time) in basically one go. I've also read a couple more since, and will probably read more in the future.

That said, I don't know I'd particularly suggest anybody else pick it up. It's not bad, or even reasonably good, but... The more I think about it, the less it all works.

There's basically two classes of issues. The first are things that are just under-explained for too long. For example, the MC has synesthesia and associates colors (and then a bit more) with emotions. This is not explained... except in response comment by the author several hundred pages in. Even later there is scene that sort of makes this clear, at least if you know what to look for beforehand. I don't think most people would get it if they weren't forewarned, because by then you've been smacked upside the head colorful descriptions of emotions so many times every chapter that you're pretty damn convinced it's an affected writing device.

This kind of problem pops up in other areas. Things go simply totally unexplained and without even any real hints. It makes it extremely difficult to analyze what you're reading. Below, most of my complaints are things I don't see good solutions for. It doesn't mean the author doesn't have some genius ideas he's doing his best to hide that explains everything... but I strongly doubt it. And even if he does, withholding them for so long is itself an error, I think. And there's no indications any such genius explanations are coming anytime soon.

The more significant issue is that the author seems to have a lot of ideas about things they want to do, but haven't put much thought into how much sense it all makes when taken as a whole. The MC has strangely modern (western) morals with zero explanations despite many facets of the world, and his situation in particular, suggesting he would likely think differently.

There are occasional exceptions when he needs to have some kind of moral failing he can learn from. Which isn't a bad idea, except for when his moral failings are based around the one aspect of modern morality he should be particularly sensitive too given his unique situation. Meanwhile the other aspects he's so modern on, are the very things you'd expect him to disagree with.

As a result, the MC's character ends up pretty muddled. It feels more like a random assortment of ideas than it does a fully coherent character too often. Anyway, that's my major complaint. There's too many instances of these sorts of problems in both characters and plot.

Grammar-wise it's very understandable. It's mostly actually fine, but it's not so close to perfect either. Later chapters are worse, though for the very last one or two I think the author is trying something new and it might be better going forward.

One lesser reason you may not wish to read this is the MC's power - space. Tropes are tropes for a reason, and it's not because people don't like the idea. I can't disagree. It's a cool idea. However from what little bit we've seen so far, I think the author is struggling to really be able to explain it. I don't blame him - it's a hard problem. But enough people have done this that you find better descriptions. Something more concrete may have been a better option.

I think this is one of those you like more the less you think about it, but between being a slow burn and a serial... the one thing you are not lacking is time to think about it.

There are balance issues

Specifically, 27 chapters of a remarkably frustrating protagonist is way way too much. If asked to tell you one positive thing about this stories main character I would honestly be nonplussed. He's whiny, unearnedly proud, over emotional, lazy, stupid, unmotivated and has to have the obvious right answers to a situation quite literally beaten into him. I think the author is trying to do a slow burn progression, which would be fine if I in anyway enjoyed reading from the MC's perspective.

The world building could maybe have saved it cause it does seem pretty unique, except the protagonist as of the like 25th chapter just figured out how to access his abilities (god was that a painful realization) and instead of trying to understand them or train them he has decided to do this meditation technique he "invented" that seems to be really only doing him harm.

At this point I have found myself struggling to find a reason to hit that next chapter button.

The premise of the novel seemed interesting but the grammar so far has been such a let down, the author also continuesly fails to give descriptions on so many aspects within the story there's so much that is not explained and fleshed out that really should be. I'd personally recommend the author get an editor who can help them out because there's so many issues with every single chapter, I'll definitely come back to this in a few months when the story has been somewhat edited and refined right now it's really hard to read

A great start and good concept

Reviewed at: Chapter 36 - The First Stage

I heard about this story from r/progressionfantasy and I'm glad I put it on my TBR . The story so far is slow paced with beginnings of progression within the magic system for the main character. Not much has happened yet except for the main character learning how to use his power and school life. I enjoy it so far, but some might be turned off by the pacing. The characters are interesting so far. I'm glad for the multiple chapter release schedule which is nice for newer stories to gain visibility and for readers to get a feel for the story quicker.
There is no grammar issues and it is easy to read. The main character having a unique power is nothing new as far as stories go. I will continue reading for now. I'd definitely like to see an exploration of the magic in this world and how the different paths of magic and type differentiate themselves.

I'll be checking on this story regularly to binge the three chapters released weekly. I'll also see about updating my review as the overarching story starts to come into the forefront. For now it hasn't been present which is fine but it is something I'd like to see in the future.

This story features a great cast of characters, a unique magic system, and great writing.

The main character doesn't start out as a hero, he doesn't even start out ambitious. He lives somewhat comfortably before he gets a rare magic power that means he can't find any teachers. I've been fascinated to learn about his magic in this unique magic system with him.

His friends are nuanced, with flaws and traits that make them believable; even his enemies are not cartoonishly villainous who aim to oppress the MC just because they can. He himself has flaws, and has to deal with the consequences of his actions. It makes his actions much more meaningful.

The writing is very good. I've barely noticed any grammatical or spelling errors, and the writing usually flows smoothly.

If you enjoy reading about people growing up and learning magic without killing monsters (so far, anyway), with a focus on social and magical interactions, you will enjoy this story.

In my opinion this book is definitely 5 stars. The author has done a great job with expressing the feelings and emotions behind the characters and their actions. The book progresses slowly, don't expect a 10 chapter superhero. I have noticed little to no grammatical errors. I love the book so far and would recommend it.

Early story review, will try to do more later

Nice progression so far.  Well written, with a nice flow.  I'm only at chapter 5, so far, so it might build up further in, but there seemed to be a little lack of character building/background.  I don't necessarily need to see Esmund and Ranvir grow up from suckling babes, but a little background of their childhood shenanigans would add more depth.  Just my opinion, but some at least basic explanation of what happened to Ranvir's mom would set the stage better for whatever you have planned to use it for in the future, instead of a blindside.  Take from it what you will, I'm no editor or English scholar.

A good take on a well trodden genre

I typically read books around 200 pages and if they haven't had any issues with submission so congratulations on hitting that milestone.

This novel, at this point, is a good take on an enjoyable genre to read. It's slow paced and the protagonists is inherantly special but struggles in a lot of ways. I genuinely hope he doesn't become amazing at everything and is genuinely shit in a lot of ways but special in others.

So yea I'd you want that magic world stuff have a read.

(No hints of romance so far, no idea if there will be any or if it will be good.(I don't typically like most romance unless it's good like housewirch or gayshit lmao :p))