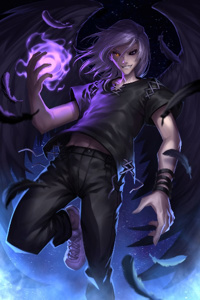 My Goddess Mother Gave Me A SYSTEM AND KICKED ME OUT

A disembodied soul wakes in a void with no memory of who they used to be but still had general knowledge of how they had lived on Earth. The soul is approached by a primordial goddess of chaos and is asked by the goddess whether they wish to join her family. Once they became kin with the goddess they were told to travel throughout multiple worlds and get stronger. Follow the story of Zero as he travel throughout familiar and unfamiliar worlds to gain strength.

good until it became wish fulfillment

For the first 30 or so chapters I enjoyed it but soon after it started to show sings of the whole wish fulfillment thing. Gaining skills based around sex/sexuality/lust then he grabs some fairly random charater barely mentioned and turns her into a qarinah, think succubus but different I gues. then the sex scene on chapter 44, its not even a good one though even if it was I wouldn't give this a higher rating.

Personally? Not my thing, but considering the amount of these types of books on RR it may be yours.

wish fullfillment author self inserts himself in the world of his favourite stories and video games and such. anyways, kid goes to dracula world and copies his powers, then goes on to ascend to become something like a god or something. the magic doesn't make much sense anymore, and everything is ridiculous on several levels, in terms of physics basically magic overrides it, and he eventually can do whatever magic and skills he wants as long as he eats enough souls. he can also create souls and stuff so he has overpowered people everywhere calling him master.... calling mc powerful is not enough to describe mc. it's more like mc starts treating reality like a toy, and enjoys breaking it on several levels. like a child who was given a screw driver and a copy machine from his mother, so he breaks everything apart and makes ridiculous things. except that he has no idea the consequences of breaking things apart, or even how anything works even after doing that, just that it looks cool, and he basically relies and the copy machine to make it all functional. things from mythology and magic only make sense because mc wants them to make sense. skills are accumilated really quickly and there is no rule to them. every world that exist in fiction exist in mc's multiverse. which means they are both real and not real at the same time, depending on which part of the multiverse you're walking on. more like dreamscape but with chaos ruling over everything. that's a quaint way to describe reality.

the skills have nothing to do with anything anymore. everything becomes just a battle of wills at that point. like the mental fight they have towards the end, where they rely on their imagination to do anything and that's inside someone's mind. time magic? mc unlocks that by chapter 30. soul magic? sorry, already mastered. the divine tree iggdrasil is copied to become his daugther or something in a gacha like game mechanic where he just merges a bunch of souls together. yeah. but it's fine. I kinda like it. the system and skill acquiring feels like that time I got reincarnated as a slime wn, but towards the end, where after the second half everything becomes kinda ridiculous but still charming, with ridiculous plotline and absurd power and skills being acquired everywhere.

rimiru and gang grow strong to the point it's more of a joke to defy them if anything. like, hilariously funny. but not the ln where he becomes a more subdued business man and they changed the plotline to make him look more 'polite'. he spared that king guy, so that destroying an army thousands of humans suddenly doesn't look evil, and changes his personality towards the monster side, basically throwing his character development to the trash can because they want to make him look weak to make him more likeable to a wider audiance or something. anyways, that's the plot. I kinda like it so a 4, but it's really bad so no way that's a five.

Reviewed at: Chapter 169 The Empire Rises

To put it simply this novel is like junk food; its bad and quick but you still come back for more. It becomes a power fantasy after a little while with skills becoming damn near useless making every fight into a dbz slog of will.