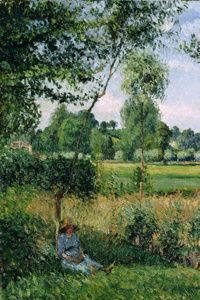 This Used to be About Dungeons

This Used to be About Dungeons is a comfy slice-of-life adventuring story that occasionally features dungeons. Updates Tuesdays and Thursdays.

Mostly it's about walking in the woods with a friend, looking for mushrooms to put in your soup, or haggling with the guy selling squash, or taking care of a neglected garden. It's putting some jam on shortbread biscuits. And yes, sometimes you go down into the dungeons with your friends, and you kill monsters there, or disarm traps, but when you come out, you realize you've found the perfect magic item to give to one of the local kids that helped you out when your cat was sick. Look, the dungeons are always going to be there, and sometimes you need to make a journey to one of the Spirit Gates, or make a pilgrimage with the local Cleric of Symmetry to a holy shrine. Your tour through the local dungeons can wait. You'll have rivalries with other groups, and find some dungeon eggs that need to be carefully incubated in case they turn out to be something valuable, and help a friend to build a fishing weir. There's a big world out there, a mostly tame place with lots of magic, and even more to do and see. Join me, won't you?

One of the objectively best things on this site

Reviewed at: Chapter 78 - Law and Order

A young adventurer sets out to clear dungeons with four young women at his side... This Is probably the best story ever writen that begins like that, witch might not be a particulary high bar but nontheless.

I like the writing style and It alone is enough to keep you reading but the story and worldbuilding are great to. Its a story about the characters and different chapters are from different perspectives. Its a Slice of life or maybe its an epic with a glacial pase.

I realy can't think of anything bad to say about it exept that there is sometimes a rare word I don't know but lerning them is good.

There are basically two stories here:

1. A strange world where everything is divided up into 12 mile wide hexagons (which are bestagons) with horrible magical semi-sapient(?) deathtraps in the center, filled with monsters and magical devices.

2. A low fantasy slice of life about 5 people living and working together, discovering themselves and working through their problems.

The main characters are all fantastically done, and each of them has a unique voice that adds significantly to the story, which is something that is rare in multiple viewpoint stories.

The characters are goddamn interesting, I love them all.

The world is really really interesting, and to every new word or notion or simple detail I just get more and more curious about it. The world building is quite natural, done from bit to bit or sometimes all at once.

Overall I just fell in love with the characters connections, they are 5 different persons that somehow actually work as a team and why and how they do is amazing.

Anyway if you like reading about different people with different personalities and lives uniting to go through dungeons or just move a heavy wardrobe from one place to another, give this story a go and you will really like it !

Thanks for writing mate ! Keep up your amazing work !!!

It's Still About Dungeons

Don't be fooled by the title: This Used To Be About Dungeons is absolutely about dungeons. It's also... not about dungeons. You see, the focus isn't really the dungeons themselves -- they could be anything, really. Trials of the gods, a group project, building a home. The focus is the people, what makes a party tick, how you work together with your colleagues, and how you become friends. We follow our five point-of-view characters as they prepare for, delve into, make away with filthy loot, and then handle the logistics of selling said loot and preparing for more delves, and this whole process gets so much attention paid to it that it almost feels like other fics about dungeon delving are hollow in retrospect.

The characters are what this is all about, and unsurprisingly the author manages to create five (!) incredibly distinct voices and worldviews, five different upbringings and life experiences, and the complex relationships between all these different people. This, I believe, is what other reviews mean by 'slice of life' -- the fact that there's so much attention paid to people and relationships. I think that it's incredibly unique for any story on Royal Road to have such a polished and satisfying approach to character.

But that doesn't mean that the world is neglected. Characters constantly reveal tantalizing worldbuilding elements through natural conversation, ranging from the makeup of the entire world all the way down to the mundane like cooking and storing food. Dungeon's world is unique and like none other. It isn't a LitRPG, but it takes the best of that genre and discards everything that could be stale. Again, unique and satisfying.

This is almost an afternote, but the copyediting is impeccable as well.

I highly recommend this story to anyone who enjoys fantasy of the dungeon-delving kind.

The characters seem to be well build and the slice of life-type stuff feels very nice to me. The bits of worldbuilding are also delightful.
I'm liking it a lot, for now, but I'm also intrigued about the backstories of the characters, and what the serial will actually end up being about.

A realistic fleshed out take on a D&D esque world

This story manages to feel real in a way that few stories on this site do.  The world seems fleshed out and consistent, and characters motivations and personalities are diverse and interesting.  This story is manifestly not an endless slog of dungeons, this is a slice of life done well.

Reviewed at: Chapter 15 - Good Next Steps, I Suppose

The worldbuilding and characters are compelling, and all indications point to this story continuing to be interesting to read going forwards. Wish there was more stuff even close to projecting this level of quality.

Also good if you care at all about basic internal coherence / realism / not having your suspension of disbelief constantly taking a beating. This author tends to be good if you're discerning on that front.

The characters in Alexander Wales' stories come to life, jump off the page, and thrust themselves into the center of your attention. They have their virtues and their vices (which you'll come to love even more than their virtues) and quirks that make you sure that somewhere out there in the multiverse, these people actually exist and Wales is simply giving you a window into their beautiful country full of interesting people.

Whatever you call it, it’s definitely well written

I've seen a few reviews arguing for and against the "slice of life" tag. I don't see much of a point in arguing about definitions and labels (definitely not a follower of Qymmos, I'm not), so I'll ignore it in favor of just stating that it is definitely a competently written story, with nigh impeccable grammar and point out the things that may or may not appeal to SoL readers.

I've been reading and enjoying it since chapter one came out, but I waited until a good while longer before writing an advanced review so that I'd have a reasonable grasp on it before doing this. TUTBAD is not a story with some great goal that it's headed towards. Each of the characters have their own goals and motivations, but none of them is headed to defeat a big bad, save the world, retrieve a macguffin or anything of the sort. They're a party of dungeoneers clearing dungeons. That might give one the impression of an action adventure story, and in fact the dungeon chapters qualify as such, but as the title and the blurb clearly state, that's not the focus here. What the story is all about is the time in between, the interactions of these characters as they slowly go from complete strangers to friends. There's a whole lot of eating scenes and hikes, as they provide the backdrop for them to talk and reveal their personalities, each of which is quite unique and, just as you think you're getting the hang of them, still manages to surprise you in a way that makes perfect sense in retrospect.

As far as worldbuildiing goes, the author doesn't disappoint, the setting feels quite unique, even as it is playing with the conventions of your typical fantasy world.

And even in regards to the storyline, which is usually the weakest point of SoL-like novels, there's still some manner of conflict going on to keep things interesting, even if it's not the main focus.

One of the best stories on the site.

It has interesting characters in an interesting setting and doesn't rely on endless blocks of stats or blue boxes to generate fake story progression.

All five protagonists are well written, no cardbooard cut-outs here. They have distinct and interesting personalities.
The grammar is perfect, and the style of writing works very well.
The story takes place in an interesting setting, a world that has dungeons and some game-like elements without all the stats etc.

The only mild criticism is that the story could move a bit faster - for comparison, at a comparable word count a printed paperback would have to have reached the climax of its plot arc. Here it looks like it only just being set up at chapter 30.

I would have made this an advanced review, but Im not up for padding the word count with BS jut to reach the stupid word count limit so here are the scores: