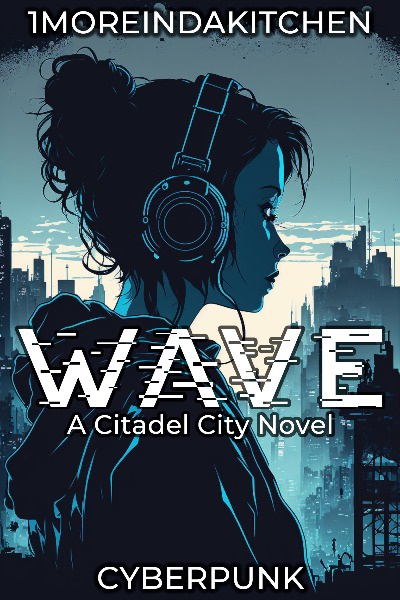 Wave had always considered herself a good driver. Well, until she crashes into a desk. Now her hover car is junk, her eardrums are ruptured, and instead of admitting her for a thirty-second surgery to fix it, her insurance company just gives her a damn hearing aid.

When someone hacks into the hearing aid's operating system and speaks to her in the voice of the mysterious radio host Aki, Wave just wants to lock herself in her apartment and shut the whole world out. But then the news report that Aki has thrown himself to his death the day before, and Wave begins to investigate.

The story picks up quickly and, within the first few chapters, introduces several plot threads, a handful of colorful characters, a dead body, and a more plausible Gamer (2009) style VR combat experience.

The themes remind me of the Ghost in the Shell manga mostly due to the cyberpunk dystopian setting while still containing a lot of optimism and excitement for the world. Also contributing to the GitS feel: "Synth" rights/morality, authoritarian police forces, hacker terrorists, and a post-apocalyptic super-city that's all-utilitarian cement and ad-space. Or is that all cyberpunk?

I can't say the world-building is original, but the author brings it to life in an enjoyable way.

As a reader, I hope that the inevitable conflicts that Wave and her friends will need to overcome don't ultimately crush them. I'll just have to wait for more chapters...

Wave is a “new adult” (also likely the target audience). She’s struggling to make it in Citadel City; partly due to her own choices and personality, and partly due to her parents being infamous ‘terrorists’. Even though life keeps throwing curve balls (or desks) at her, she’s soldiering through it.

Ember is the best friend. But to me, she comes off as that younger sister who’s actually got her s*** together compared to their older sibling and knows it. Hammer possibly plays the big older brother role. The team feels pretty complete and I enjoy their dynamic.

Grammar and Style (The 4-star items)

The fiction is being translated from German and the author is actively editing and improving both the style and grammar.

Overall, this is a good story and well written. I found myself flicking through the chapters without even noticing and was genuinely disappointed when I got to the end. The world building is well integrated, leaving you without exposition dumps or left floundering for more information. The author has created a very fun, futuristic/dystopian world.

Style: Translated from German originally but it is mostly without fault. The author seems quick to edit and improve if something is pointed out. My only fault would be that the chapters feel a little short but that my be my own greediness speaking.

Story: I can’t say too much for the story because I feel that it’s still not fully set up but thus far, it is very good. There are many plot threads starting so far, what with Wave’s hacked hearing aids, the investigation into this, the problems within the city and fight for domination as well as the arguments of morality surrounding the robots. So far, it is well written and there is enough foreshadowing to keep me interested.

Grammar: The grammar is the one thing that I think this story is falling down on but it may be a translation issue. Often a period is used where there could have been a comma and there are quite a few missed commas but I don’t think this is bad enough to disrupt the reading experience.

Character: I love each of the characters introduced so far and I think they have been written very well. Wave (the MC) is sarcastic with an intriguing past that seems to haunt her. Hammer seems like a wonderful friend whilst, as another reviewer has pointed out, Ember seems to be more like a younger sister to Wave. They’re very realistic and I think their dialogue is well written.

I think this story is good and I’m excited to see where the author goes with it. If you are a fan of classic cyberpunk stories, give it a go!

I wonder what made this happen

Like, what drug-induced state do you need to be in before this story-idea comes to mind? Heroin with skyrim maybe? Or, I guess something mildly Cyperpunk 2077 would fit better. Whatever.

Plot is pretty dang interesting, grammar is rock-solid, style draws you in quicker than expected, and the characters truly shine here. That's about it. 5/5