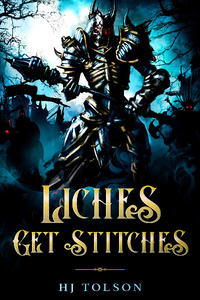 The Wish Part I - Elaine, from Beneath the Dragoneye Moons

The Wish Part III - Maud, from Liches Get Stitches

The Wish Part IV - Ariane, from A Journey of Black and Red

If I didn’t know better I would think I was dreaming. Suddenly, the cathedral is gone, the nun, vanished. But, alas, the dead don’t sleep so I have to assume this is real. Perhaps it is all some sort of magical illusion. A trick? Maybe I have travelled once more to the Whisperer’s lands but this place seems too… jolly. Too colourful. Definitely too covered in mangos.

It is also annoyingly populated.

I glare at the girl with the butterfly wings who looks suspiciously like a paladin. She beams back at me. Her soul probably tastes like mangos too.

“What will you wish for, Maud?” she asks. Elaine, that was her name, I remember.

I can practically see the sunshine pouring through the space between her ears. Is she some new variety of holy warrior spawned in a virtuous chalice of courage and blah blah blah, especially to vex me? What did I do to deserve this? At least Elaine seems to be too dim to understand what a lich is, or if she does, she doesn’t care. Definitely a paladin.

What should I wish for?

I could wish to be human again! But no. I am not a bug to be squished beneath the heel of another. It is for me to do the squishing.

What else? The Whisperer’s death. Yessssss.

“How do you feel about deicide?” I ask the genie, carefully.

I don't like the look in his eye, and my eye drifts once again to the many mangos carcasses littering the ground. I wouldn’t put it past him to try and drown us all in a tidal wave of peaches. Not that then. A pity. Hmm.

Seeking inspiration my eye drifts to Edmund. He walks nearby, poking at a rock with great suspicion. He is pungent, even by the standards usual for peasants. He reeks of blood, death, and most interestingly, of insanity. The gaunt, wiry man holds his spear with the paranoid attention of one who expects a deathly ambush at any moment. His careful inspection is taking a long time due to the quantity of squashed fruit. He looks like he’s been too long at the smelling salts.

“Nice pauldrons,” I say, and his head snaps towards me. He blinks.

“What? Oh. I have questions,” he says, “and the answers with which to pay for them.”

“As is only proper,” I say, approvingly. Someone who knows the value of a good bargain then. His boots are also interesting. They seem to be made of shadows. I wonder what creature he skinned to make those.

Perhaps I should wish for a new dress, one made of shadows? With lacy bits spun from the gizzards of my enemies? No, too soggy. Better to stick to spider silk and satin.

“What do you think?” he mutters out of the corner of his mouth. “I think it's definitely some kind of trap, and I don’t believe you for a second.”

“What do you mean?” asks Lady Bombs and Stealth. Her eyes narrow as she looks around.

“What? No, I’m not talking to you,” Edmund says. He has a hurried conversation with the empty air beside him. A ghost? No, something else. Or maybe the man is simply lost and insane.

She smells of explosives and sugar. Perhaps she is an alchemist who enjoys baking? I might ask her but I can feel already that I have done enough socialising for one day. Edmund continues to talk to himself so I politely ignore him.

Still seeking inspiration I look at the last woman. The vampire. She is as cold as ice with an aura unlike anything I have felt. It washes lightly over the landscape of smooshed mangoes bathing us all in its deadly chill.

Ariane could be a creature of the Whisperer himself. However, I would be more impressed if she wasn’t swaying and humming tunelessly under her breath. Something about a pirate captain and a lusty lady and a prodigious amount of… booty? If my ears weren’t made of dead flesh already they would drop off. Her soul probably tastes like cheap wine.

I wonder… do I dare?

I do dare, I am mightily annoyed by everything. The mango juice is never going to come out of the embroidery on my hem. The stains are almost as bad as blood. And dying is one way to get home, even if it's not my favourite thing to do of an afternoon.

“Decipula alma,” I whisper, gesturing to the vampire.

Ariane stiffens, and the singing comes to a sudden stop. Interesting. The woman is apparently as soulless as I, and as dead. Another empty shell filled with wickedness no doubt. This attempt to steal her soul may have been a miscalculation, because the drunken vampire has most definitely felt the attempt.

Her fangs clamp down on my neck before I can move out of the way. She is alarmingly fast. The others squeal in alarm but I flap my hand at them. It's fine. It doesn't hurt much. And good luck to her, I don’t have any blood… and yet I can feel her drinking something. It is weakening me, like a leeching spell.

“You taste like magnolias and rich soil,” she giggles, licking black liquid off her lips. Her eyes, very close to mine, widen. “And a boot up the ass.”

I hiss, and break her grip. Twisting, I bring up the haft of my axe in a mighty blow. She blocks it easily, snarling.

“You are very strong,” we both say at the same time.

The vampire flies at me with her claws extended and I duck, then kick her on the backside. She exclaims and I attempt to grab her in a headlock. I miss and she ends up wearing me like a backpack.

“‘Cuse me,” says the vampire, and hiccups.

I climb off the vampire, a little regretfully. Then I straighten my blouse, which has become ruffled.

“I bet,” says Ariane. “I could beat you at thumb wrestling.”

Oh yes. The wish. What to wish for?

What I really want is to go home. The trees here are strange. It smells strange. And those creepy eyeballs in the sky are definitely strange. I don’t like it. I want to be home with my cat and my knitting.

“I wish everything would just hurry up so I can go home,” I say.

The genie’s smile widens, and he snaps his fingers.

Everyone looks around warily.

“Nothing has happened,” says Lady Bombs and Stealth. That’s not entirely true, the light is flickering strangely.

The enormous piles of fruit sag. They are rotting, shrinking in themselves until they are black husks that fade away into nothing.

“Incoming!” yells Edmund, pointing towards the forest. “Get ready!”

The trees buck and sway. Something big is coming, the boughs rippling like grass in a hurricane.

Elaine draws glows with light while a star-filled shield forms in front of her.

Giant reptiles burst out of the trees. At first I think they are lindwurms, or some other sort of wingless dragon, but the shape is wrong. Their forearms are too short, their bodies too stocky. But whatever they are, they are rampaging towards us. I heft my axe in excitement. I could do with a new pet.

Lady Bombs and Stealth screams with enthusiasm and points her mechanical wand. A red circle appears on the lead creature’s scaly forehead. There is a sound like a small thunderclap. It explodes in a shower of blood and brain matter and collapses to the ground. The rest stampede past in a flicker. Gone as soon as they arrived, before the rest of us can even react. How did they run so fast? They were impossibly fast.

“What are they?” I demand, my head spinning.

Cat runs over and prods the enormous carcass with a toe. The flesh melts from its bones leaving only the skeleton behind.

I disagree, the bones are quite lovely.

“What have you done!” shouts Elaine. She points at the sky.

Now I can see the source of the flickering light.

The twin moons are zipping across the sky. Over and over they go, round and round in a wild arc. The light shifts and changes, day to night, and day again, in a matter of seconds. Stars are flung in a wild scatter, blooming then fading, chased by the bright light of the sun in an endless cycle. The grass is growing under our feet.

“By the Watcher,” says Ariane.

“By the goddesses,” says Elaine.

Flowers burst into petals, then fade. The temperature drops, cool, then cold. Storm clouds race overhead, a burst of snow coats the ground in a flurry of white. Clouds scud in the flicking light, more snow, then it melts as soon as it has come. Green grass shoots up in a matter of seconds till we are standing in a meadow flush with flowers once more.

A note from Hesketh II