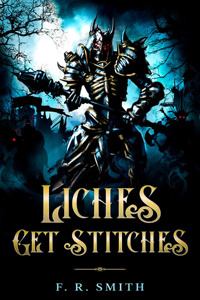 In the isolated forest of Downing an evil stirs. A necromancer works his foul magics, and a blight lies upon the land.

Liches Get Stitches tells the delightfully gory tale of a single, intelligent spell caster who just wants to be left in peace. Featuring grisly crafting projects, gentlecrypt-keeping and much murder and mayhem.

This is one of the better executed lich lead stories on the site. As a general premise, a young woman is accidentally turned into the target of a lich making ritual rather than the necromancer involved. Having lost a chunk of her humanity, we slowly uncover what parts of her personality remain from the human she was before. There is a rather large amount of dark humor involved.

The story is very well executed. The protagonist as a character starts out as an unknown and we gradually discover both her new lich-ness as well as who she was in life. As a powerful undead, she soon becomes indulgent on her petty desires and begins a bit of kingdom building. The worldbuilding and lore are great. The style is wonderful and very well balanced. And the grammar had no complaints.

This will undoubtedly become rather popular with the very sick people on Royal Road.

EDIT: So, I learned later that "lich" is pronounced with a soft "ch" sound at the end, not a hard "k" sound.  Just, FYI.

Reviewed at: Chapter 19: Warcraft and Embroidery

I have a soft spot for undead or monsterous main characters but often find most stories either oversell or undersell the premise. The protaganist either being just a regular person in a different body or an edgy, '2dark4u' dickhead.

Liches Get Stitches hits the mark perfectly. Not shying away from the reality of life as a soul eating monster while staying grounded and strangely relatable. This story does involve a lot of violence, death and dismemberment, but never strays into being gratuitious. Other reviews mention 'black humor' but to me there's a strong undercurrent of what I'd call 'black mirth'. The MC has a dry wit and takes time to enjoy the simple pleasures of unlife, such as the swirling of an impressive robe, the terrifying honking of damned geese and of course, trebuchets.

It's an easy recommend for me and I can't wait to see more.

So to start I want to mention that the MC is female, I know big surprise. But now I want to ask you dear reader: When was the last time that we got to see a female undead prot in a story?

Well I actually remember a few times, but those stories didn't go that far or suddenly stopped like Acacia chronicles (still not sure what's up with that).

But I am just so done with prepubescent undead lords or lords of death edgy mcgee idiots with a harem of braindead sexdolls. And this fiction, just by having a female MC makes me hopeful. Hopeful that something like that won't happen.

Style: Gore? Yes. I like. Bad words? No? I don't like, but eh.
Anyways. As a million others have already said on this site: This is quite a fresh take on the undead lord kingdom builder genre my dudes (hits vape). Eh yeah. No. This story handles violence quite easily and nonchalantly if I may say, which IS refreshing. Often times I find action scenes to be too drawn out, as they symbolise a climax in an arc/chapter/scene/whatever.

But here it just happens... AAAAAND on the story goes.

Otherwise we have the MC narrating as usual (hurr durr who else? Well I might know a few)

No. As little as this story has progressed it has gripped me like few others, which mostly comes down to the style in the end. At least for me. If there was a patreon I could sign up to, I would. Simple as that.

Story: Well not much to be said here ngl. It gud . Yu rid. Yu enjoi. Well thought out with few pauses to breathe, which it really doesn't need, as even the few non action scenes seem to fit organically, as to swindle you into a sense of slowness that really isn't there.
For noe the story seems to know where to go and we are on a pleasant ride of ups and mostly that.

Grammar: As always, I'm too damn tired and TOO DAMN HIGH (on tea leaves mind you(and yes, only Yorkshire tea gold))to really give any reliable verdict on that. But people know how it goes on RR. Anything less than 5 stars might as well be 2 because one or half a star normally is so comically bad that it's good again... ehem. Anyways.

I haven't noticed many mistakes... if any, hell I don't even remember there being any, so who knows.
Everything seems perfectly balanced as all things should be.

Characters. Already touched on that. Didn't I? Well. Mc good. Actually. I like how whimsical she sometimes acts. It is one of the few live lichenings that I've "witnessed" that ended in a rather "meh, guess I'm undead now" setting. But in the end. Would your morals really conflict with your new body if you would turn into a lich? I mean some authors become so emotional , their undead kings don't even kill... Nani teh feck?

Here we have whimsical splatter and gore scenes that read like a child runs across a see of flowers, playing with butterflies.

Final verdict: It deserves the 5/5 recommendation.

In my opinion (as of chapter 20) You should not miss this.

Thank you thank you. You are too kind an audience.
Ah yes: I almost forgot: Thank you, for the fiction dear author.

Reviewed at: Chapter 16: The Long Way Down

ok, it's only just started, but so far I'm enjoying it quite a bit. There are a few things I could quibble about, but overall it's fun. The author's voice is quite different from the usual for this kind of thing, and it makes it a breath of fresh air in a rather tired niche.
MC is a bit random and thoughtless at times, gets away with unlikely things at other times. But it reads nicely, as mentioned I enjoy the author's style, and it's pretty funny at times. It seems like an interesting mix of adventure/levelup/horror/humor without settling too long on any one of those.
Is it perfect/the best thing evaaar? nope, but it has already earned a place fairly high on my bookmarks list, which makes it a great find.

Reviewed at: Chapter 23: The Tarrasch Rule

For the most part, I give 4.5 star ratings as no story is perfect. This one isn't either, but it's close enough.

The MC goes dark quickly with only a couple/few sentences to explain why. That's my only issue with this story. Well that and some pretty thick plot armor in places.

It's a smart, witty, and fun story of a lich just trying to "live".

An accidental origin and unique worldview for the main character that brings about quite a few enjoyable moments. Well written and edited there have been no errors that detract from the reading experience. There are so many directions the story can go from here and I have high hopes, I look forward to many more chapters to come.

Reviewed at: Chapter 15: Whispers in the Dark

This story reminds me of a Journey Of Red And Black: A mythological undead creature unwillingly created, left clueless and with an entertaining sense of propriety and murderousness. And a love of siege weaponry.

It seems like more darkly comedic than Journey, but the last two chapters (14 and 15) were more serious, and I expect it's going to have serious moments in the future.

Reviewed at: Chapter 18: The Bright Ones, the Blind Ones

Watch out for this one boys and girls, this one is going to take Royal Road by storm.

I haven't read something this good in a while, and the best way to express it is to say I want moreeeee.

Liches Get Stitches takes the undead necromancer sort of story  and gives it an incredibly enjoyable twist which is different and unique.

A story I will be reading in my off-time

Reviewed at: Chapter 5: Tales From the Wild Wood

This is good. Better than most stories on here can hope to be. I have quite honestly enjoyed those first chapters more than most stuff I've read this past month. This might seem a little vain to some but I still have trouble understanding how exactly I missed this one when looking through the new batch.

Loved it. Everything is pretty much perfect with this one. 5/5. Would have rated higher but the site isn't nice to me.

Liches who stich and bitch are rich

Style: A dark fantasy with comedic elements and Burton-esque touches of whimsy.

Story: Early days yet, we're in slice of (un)life territory.  There are some hints of plot to come.

Grammar: It doesn't get in the way, that's all I ask.

Character: The MC is a delight, firmly monstrous but with enough humanity to be relatable.  The supporting cast is sparse so far, but well drawn.  There is a cat, and several geese which are reliably up to no good.

Have you ever had one of those days when someone at the bus stop was being too noisy, and you swear if you could kill them with your mind they'd be a smear on the pavement?  Well, our lich had one of those lives, and now after unexpectedly becoming a supremely powerful undead she most definitely can kill them with her mind.  Also reanimate them and then throw them in a well for getting lippy.  Hijinks ensue.

The magical elements are interesting, the MC doesn't understand how she does what she does and we're along for the ride.  There have been some hints at a broader magical universe that I look forward to exploring.

Overall, well worth giving a look if you're okay with a decidedly non-heroic protagonist.