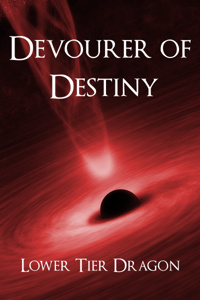 A wise old grandpa in a ring. An ancient weapon to unleash one's true potential. An unorthodox teacher who emerges from obscurity to provide heroes with enlightenment. In a cultivation world, those who would rise to the top usually have some sort of advantage that propels their rapid ascent. Things that many would offer their souls to obtain.

Ebon Dirge, a devil fallen from the highest realms of the divine, is more than happy to accept their payment. Thwarted by the machinations of the mightiest beings in the universe, he is forced to begin anew in the lands of the weakest mortals. To prepare for the ultimate confrontation, he has hatched a plot to steal the best weapon of all: destiny.

Whether it is a downtrodden youth in the savage wilds, a prince driven to desperation by the royal web tangled around him, or the students and staff of an illustrious magical academy... all should beware what they wish for. They just might get it.

For a price, of course.

This is an edited version of the novel that originally began in 2018. Some chapters are edited while others are entirely new.

Devourer of Destiny is an exploration of cultivation story tropes and foibles.  It features:

- Cultivation stuff.  The story is a quasi-satirical take on xianxia and xuanhuan staples and tropes.
- An irredeemably evil central character.
- Multiple POVs.  A lot of them, although the central character remains the story's hub and will have the most chapters by far.

TBD.  Still working it out.

So this is supposed to be a rewrite of a fic the author deleted a while back. I have nothing but fond memories of that fic, and I’m looking forward to reading a version without its admitedly numerous flaws.

Putting up 2 chapters and then leaving for 5 months is all kinds of messed up though... Don’t tease like that.

From what I remembered, I really enjoyed the original.

Other than the handfull of gripes.

Ebon's past being revealed to be quite generic was such a shame and was a let down. Him being a generic loser that was graced by a master like so much cultivation stories was just sad and off putting tbh. I just expected more of a satire or parody with just how much Ebon Derge and the stories itself portray to be a anti-generic Xianxia story.

Nontheless, I hope this story takes off and go on trending.