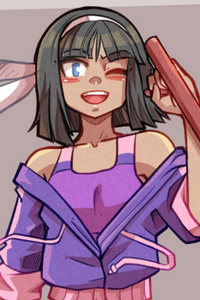 "Your Majesty. Might I ask a favor of you?" Malthe said to his employer as he held open the limo’s backseat door for her. She ducked her head down and took a seat, looking up at him through the doorway with bored eyes.

"What is it Malthe?" Ulyssa asked, bored.

"I would like a moment to talk with the woman you just hired."

"Oh, Frieda?" Ulyssa glanced at her pocket watch again. "Please make it quick. I don't want to be left alone with just these other guards at this hour."

“Thank you.” Malthe bowed his head before taking off back to the construction site. With her bodyguard out of the way, Ulyssa leaned back in her seat and wrapped her scarf around her neck to cover up her exposed neck. She then waved her hand, catching the attention of the limousine driver. "Turn up the air conditioning. The cold is starting to get to me."

"Of course, Your Majesty."

With the press of a button, warm air flowed all throughout the vehicle. Ulyssa cozied herself up in her seat, taking in a deep sigh as she let the warm air settle on her skin. Her eyes closed shut as she waited for Malthe to finish attending to his affairs. The other White Swan members remained seated in the car with her, keeping a look out of the windows while Ulyssa rested her eyes.

Quang's vehicle rattled by, drawing the attention of one of Ulyssa's men. He watched it closely as it passed by the limousine and made its way to the other side of the lot. He then glanced over at Ulyssa who was peacefully sitting still with her eyes shut. The man opened his mouth to say something until he received a perplexed glare from his cohort.

"I wouldn't stress it," the second White Swan whispered. "You really think a jalopy is worth bothering Ulyssa over?" The first guard looked at the resting woman before turning back to his partner and shaking his head.

Malthe sauntered through the construction zone, cloak covering his entire body from the shoulders down. The Union men paused their tasks to follow the masked man's path, worrying that the bodyguard might be coming for them. Even after Malthe passed them, the workers couldn't resist staring at him from the corners of their vision. He walked in a straight line towards what was built of the memorial building.

Hudson watched Fátima tend to the cut on her shoulder until he saw the glistening of the bodyguard's metal mask come into view. He froze, staring at the man as he came closer. The kendoka continued to wrap a bandage around the wound, only glancing at Malthe before looking back at her arm to make sure the gauze was secured properly. Malthe stood over Fátima, staring down at her as the height of his body blocked the moonlight and cast a shadow over her.

"Would you mind moving for a sec?" Fátima said without turning her head away from her hands. She tightened the white bandage by tugging on one end with her mouth. “I can’t see what I’m doing with you standing there.”

"You don't know what you're getting into," Malthe stated.

Fátima tied a knot with the bandage over where the spear had cut into her arm. She let out a grunt as the alcohol used to treat the wound soaked in the gash. "Afraid… I'm going to take your job… or something?" Fátima said to Malthe as she winced from the pain.

"I've been protecting Miss Ulyssa from the day she was born," Malthe began, remaining motionless as he spoke. "There's no one in this world that she trusts more than me. There is no chance of you replacing me as her closest bodyguard."

"I don't want that job anyway," Fátima said as she rose from her seated position on a palette of bricks. "I'm just looking to teach those clowns that your company hires how to defend themselves." Her eyes zeroed in on the narrow slit of Malthe's mask. He returned her stare with a long and focused gaze of his own. "Worried about an aikido instructor becoming Ulyssa's new favorite?"

"I've come here to warn you!" Malthe's voice raised. "I won't stand for snark. Especially from someone who was so easily defeated!" He took a step forward, lowering his head, making Fátima retreat by a single step as her stern expression became one of worry. "I could have easily killed you tonight. But I have a profound respect for martial artists such as yourself. There was no need to waste so much potential on one of Ulyssa's frivolous whims! However, I will not stand to let you talk to me like I am one of your students. Is that understood?"

"I've come here to warn you about the offer that you so hastily accepted. The Ingwersen family has great fortune. And with that comes a vast number of enemies. By taking this job, you will have made countless enemies in the processes. People will hate you. People will want you dead. Is that something you can put a price on?"

The kendoka tightened the bandage on her shoulder. "If the pay is right."

Malthe remained silent as he turned himself around. He turned around, looking back at Fátima from the corner of his vision. "I guarantee you whatever you're being paid now will only be a fraction of what Miss Ulyssa will offer. If you provide the results that she desires. But that money won't mean anything... if you're not able to spend it."

Fátima sat back on the palette of bricks, hunched over as one hand lingered over her wound. Blood soaked the bandages and got onto her fingers. She looked at her red stained hands.

"I'll leave you to mull over your decision," Malthe headed in the direction of the limousine. "But remember. If you do accept the offer, that I am Ulyssa's bodyguard. And no one else's."

"I get the point, big man. I've got to defend myself if I'm going to be White Swan," Fátima replied. "It's not every day I take on someone with a spear and body armor, alright? Ninety-nine percent of the time I come out on top. But I appreciate the concern." A long smile appeared on Fátima's face as she let a small laugh mixed with a grunt of pain escape. "It's nice to know my soon-to-be coworkers is worried about my safety."

Malthe faced the direction of Ulyssa's vehicle. "Don't let hubris be your undoing. You're skilled, Fátima. There's no denying that. But you're not invincible. Talent will only get you so far."

The kendoka remained silent as she watched Malthe walk away. Her entire body trembled as she placed her hand over her injury again. Hudson stood beside her, watching her hand cover up the bandage as she shook like she was freezing.

"I'm... just fine..." she said in a low voice, keeping her head angled away from the Union leader to avoid eye contact. "Just a lot to take in right now."

"Is that why you're shaking like a naked poodle in the middle of January?"

"Mind you own business, Hudson!" Fátima shouted. She looked at him with an enraged sorrow. A stream of tears stemmed from both of her eyes. "Don't you have a memorial to build?"

Taken back, Hudson put up both of his hands as if he were showing that he was unarmed. "Woah, looks like Malthe really struck a nerve. Not just with the spear, either."

Fátima returned to a center position, slumping forward with her elbow in her gut as the arm still pressed onto her wound. She took in a deep breath before letting out a moan. "I'm tired of losing, Hudson. I really am. The weirdo with the sanjiegun. And now this guy. What's happening to me?" Fátima relieved her hand from her gash and stared at it with blurry eyes as blood trickled from between her fingers and onto the dirt below. "Am I... getting weaker?" 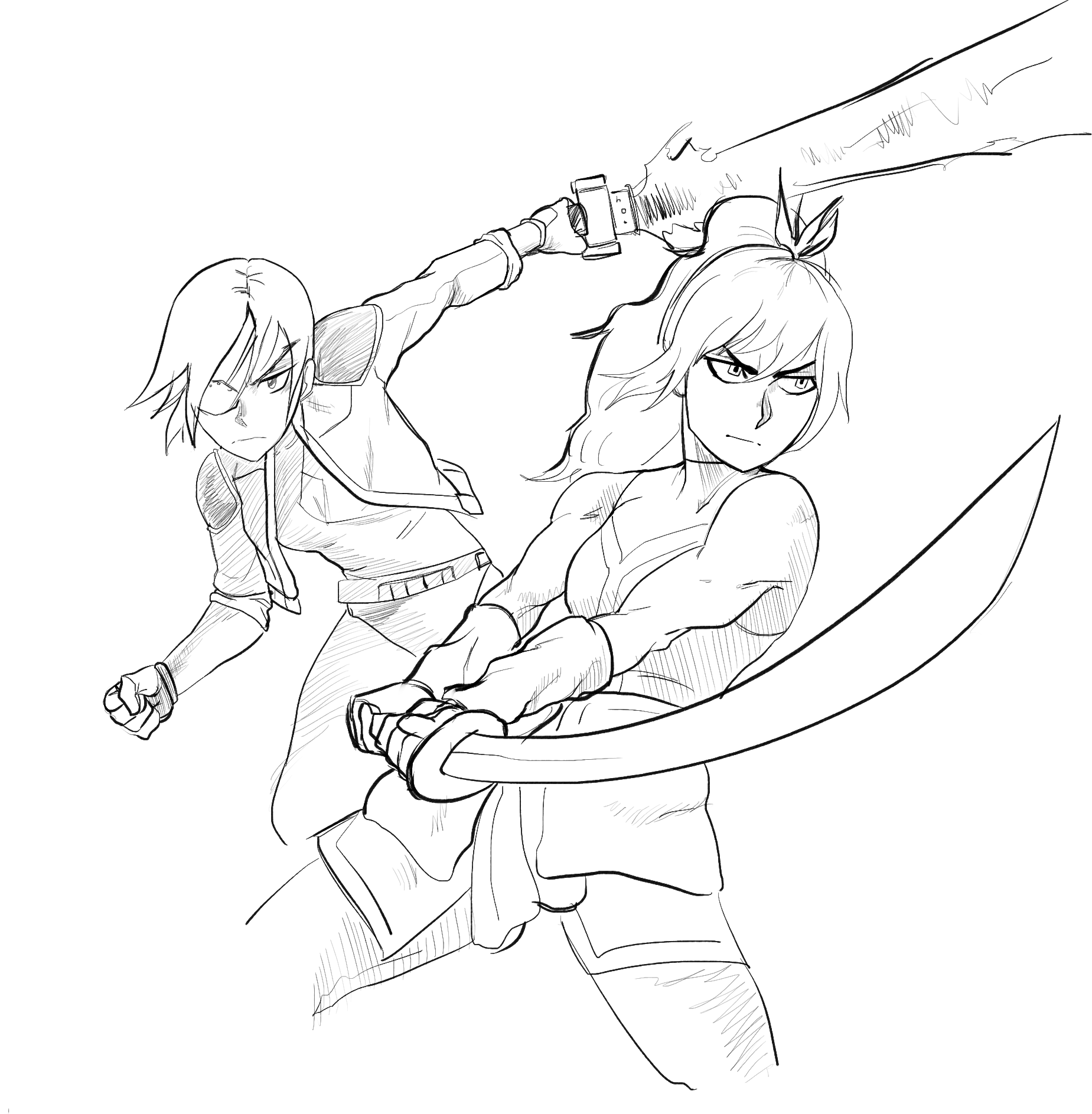 Lethal Combo's artist did a crossover sketch! Fátima teams up with Rumble Circuit's Enidri Saelex! I have a feeling that their partnership wouldn't last too long...

Turtles are different from Tortoises 7 months ago

The first place is mine once more!

The second place has been claimed by me!

The God Of Boredom 7 months ago

...But what if I let you two claim the first two places so that I could, very professionally, claim 3rd place?