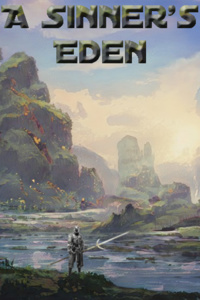 The Earth of the future is united under a single government, but not all things are well. The shape of the playing field may be changed, but the powerful still rule the weak.
And those who do not conform with the rest of society are exiled to another world. A world that not even the technology of the future managed to tame.
It should have been humanity's New World but ended up as nothing more than a penal colony. A place where the exiled are sent to die.

Motivated by revenge, Magnus sets out on a quest to bring his own justice to his enemies. For that purpose, he is willing to go further than most others.
But then he learns that if he truly wishes to change things, he can only find his answers beyond the gate.

Having lived most of her life as an exile, Astra is a woman of few interests aside from survival and climbing the ranks of her clan.
To achieve those goals, she certainly won't be squeamish when a chance literally falls into her lap, or will she?

I am trying to go with a survival/medieval setting in this one. People from a technologically advanced society are thrown into a world where they can't maintain their tech. They are forced to rely on medieval technology where they have to make do with the limited resources they have and what little of their old technology is still working. Their gene manipulation allows them to have something akin to superpowers, but that doesn't help much against the monsters of their new world. Not sure yet whether sufficiently advanced technology will be discovered later on to count as magic.

I was asked about reading my work on other sites. The answer is simple: Currently, I am not active in any other networks than royalroadl.com. Only here, I correct mistakes and errors. If you read it anywhere else and have to pay for it or have to deal with an annoying amount of advertisement, You Are Being Betrayed. You would do good if you make other people in that network aware of it. This is a free project of mine for the purpose of having fun. And if people try to make money with it you shouldn't bother visiting their website. The only one whom I actually allowed to have my work on his website is Armaell who invested the time to compile them into pdf. (http://armaell-library.net/author/andur)

So far an awesome story and further possibilities of developement. Andur created a new world outside his Multiverse books, and I love it. The creativity with wich he enthralls his readers deserve more recognition!

I am not quite sure where he will lead us with this story or what the main purpose of the MC is, but Andur didn't dissapoint with his stories yet

(Reviewed after reading the 10th chapter in his omeshots)

Very impressed by this. Great story, flows really well, no exposition. There are really two MCs -a male and female - who are destined to be together in a way that makes sense in the magic world on the other side of the portal.

There are hinted at hidden agendas, politics, a really interesting world and "evolution" system. There are already four well developed characters. The author also knows a fair. Bit about tech/science and (adapted) medieval weapons, so that helps with the realism.

this written at the most recent chapter on 15/8/21, our heroic pair have linked up with sparks and light effects (it's the Sci fi stuff) hoorah!
Shy (exotically gorgeous) smart girl has finally found her Mr Right......and the matchmaker is probably having a celebratory drink after many years of trying to get Miss Pickey sorted... match making can be a tough job. But someone's got to do it, for humanity....

The world building of nature so harsh and unforgiving that just surviving is a struggle appeals to me, its then layered by the politics of the small clans trying to survive. Not sure yet how large a focus the politic path is going to be and if the survival against nature is going to be fully abandoned into a second and third act of politic and romance.

So far its got great potential but it might veer away from my own taste.

I'm a huge fan of all of Andur's books.  I'm usually following about 30 or so stories on here, but he is definitely my favorite and not just because he actually finishes his stories.  He has a gift for pacing and keeping his audience entertained.  There is never a lot of needless angst in his books and even when something would normally be extremely heavy or depressing, he manages to handle it in amusing or light hearted manner that doesn't leave me reaching for an antidepressant.

As for this particular tale, it's shaping up to be one of, if not, my actual favorite of all his stories.  The MC isn't over powered at least not yet and though the opening set him up as having an incredible high IQ, even that hasn't really shown through yet.  He's intelligent (which is a must for me as a hate stories where the plot is driven by the MC''s stupidity), but it's quite clear this MC is currently out of his depth, which has been fairly humorous so far.  I think it's going to be a lot of fun watching him adapt and overcome.

Anyway, if you're looking for a more adult sci-fi adventure, that's not all about harems, with an intriguing but not overly serious plot, you should give this a try.

Well written with an interesting concept. I took off half a star because it uses first person perspective for multiple characters. Just hate it when authors do this and much prefer they switch to 3rd person when it's not the main character. Makes the characters read like the same person. I just think giving multiple characters distinct personality and voices is extremely hard if they are all in 1st person. Sure it can be done, but I feel it's much easier and way more successful using 3rd.

I've read quite a few of this author's fictions in the past, with some that interested me for a time, but they all seemed to fall back on the same plot with some variation of the setting.  I don't mean this as an insult, as it is clear that it not only works well, but also has kept an audience for quite some time, it has just not been my cup of tea.

While I don't know if this will be the future of this book, I do think that this seems to be a very different book than the previous works by the author.  This is a good change in my mind, that progesses the style/story that the author tends to tell in a new and interesting direction.

Andur has brought us a new story, this time delving into dystopian science fiction.  The main characters are exiled to a hellish world full of dangerous creatures, and are pumped full of nanites that force the characters to evolve based on the beasts they eat.

The world is vividly described and wildly imaginitive, forgoing all the stereotypical tropes to create a unique vision of a world full of titanic creatures, supersized insects, and saurian scavengers that are all evolutionarily stronger and faster than baseline humans.  In fact, the gravity is even too much for a normal human to survive.

The two main characters, Magnus and Astra, have both progressed enough so far to give us hints as to who they are.  Magnus takes on this new world as a middle-aged man, exploring its dangers while harboring a hidden agenda of his own.  A self-proclaimed terrorist against a corrupt and cruel government, Magnus has a lot of secrets that will be great fun to uncover.  Astra, on the other hand, is the jaded and cynical sort, with personal problems including a bit of body dismorphia and major trust issues.  She is experienced and influential, so seeing how her story arc progresses should help show us even more nuances to this fascinating world.

Overall, this story is in its early days, but Andur has shown us time and again that he is a master of balancing several plotlines and characters together, and so far, "A Sinner's Eden" is a showcase of his talents.  With a mix of dystopia, survivalism, and a dash of body horror and gory fights, this new serial promises to be a wild ride.

Already off to a great start

Love the MCs, love the world being built so far, love the writing style, and can already tell I'll enjoy seeing where it goes. Looks like two MCs who will be forced together based on survival and mutual benefits. World is harsh with crazy monsters and everyone can eat a bit to take some of their abilities and characteristics.

The evolution system in this novel is one of the coolest and most intriguing ones i've seen done in this style, it honestly could carry the story by itself for me. Luckily, it doesn't have to, because the rest of the story is also absolutely fantastic. Definitely a novel you should try out.

It's Andur. If you know what that means, I might not even have to explain my ratings. In case you don't:

Andur is an established net-author by this point and if anything, their style and grammar is what you'd expect from someone who's been writing stories for years. I didn't give it a perfect score, but that's just because it's essentially 'as good as it gets without breaking the mould'.

I'm only at chapter 26, but the story seems solid for now. Decent worldbuilding, rather original concept (I mean, different world through a gate has been done before but eh) and it doesn't entirely break my suspension of disbelief. It's sci-fi, but it kind of works. I don't quite understand the overarching plot aluded to in the interludes, but that's just Andur again. It probably just means some way to tie the story into the Andurverse.

This is kind of the most problematic part of the story for me. Not because the characters are bad, they're decent, but just because I know this character. Magnus is essentially the quintessential Andur protagonist. Scientist-psychopath. I like his MCs, but dear god do I know them too well by this point. They're always the same and while I like them, I can't exactly call it original. This is all because of the Andurverse essentially. I'm sure somehow the character will once again just be another iteration of the previous Andur protagonists and that'll be it. Astra and Magnus are once again together, as they always are, the sisters might just be reincarnations of his daughters or something else and once again we'll have a decent and fun story, but nothing truly new.

TL;DR: It's an Andur story. Same characters, different world. If you're not sick of it by now and just want a fun little binge, just read it. It's certainly better than a lot of the sad excuses for storytelling that infest this site. Just don't expect to get wowed if you've read Andur before.