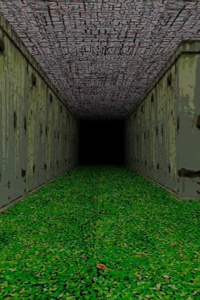 It was a clear and cloudless night, the kind that seems to ward off evil. The moon held such an overwhelming illumination that it almost seemed like a blueish counterpart to the sun, and the indigo shadows cast by the superfluous and thusly dimmed street lamps were preternaturally sharp. Every so often, the slightest breeze would tickle the flesh of any potential observer like the touch of a cold blade, and the streets were empty. It was approaching one in the morning, after all, and no one had any reason to be out anymore.

These conditions were known by many names, none of them fitting the auspicious atmosphere. The Hunter's Moon. The Tartarus Moon. Phase//Flood. Ask who you like, and no one would tell you nice things about this kind of night. And yet, it remained still as an undisturbed lake in a cave.

Until a stalactite breaks off and pierces the surface.

A man of average height and build tears into view. Rubber soles not meant for running slap pavement with the grace of a fish thrashing on a dock. He's churning his legs, arms, everything, in a primal dance meant only to propel his body forward. With each panicked gasp, he filled his lungs and throat with cold blades. His legs were filling with lactic acid and beginning to ache, but as expected, there is no time to think, no time to process, for he must keep tearing down the pavement. That is all he knows in this moment. Sheer instinct pulls him forward, stride by aching stride, for even if it kills him he must outrun the rotting terror bearing down on him with too many powerful legs.

As expected, he trips.

Maybe it was fate, maybe it was years of horror movies dictating to the public subconscious that people stumble when danger is on their tail. Maybe it was the man’s utterly uncautious stride, or some combination of the three. Regardless, he tripped spectacularly, with a sort of- almost- grace, the way even the gawkiest pelican can have a moment of grace landing on the sea. He came down hard on the parched pavement with the kind of slap you hear when a train hits some kind of large animal, and didn’t get back up. His quivering betrayed the reason: not injury, but terror. For ten eternally long seconds, he anticipated all varieties of claws, talons, barbs, stingers, and the like rending his ever-so-lively flesh. In that span, the shifts of several sharp breezes made him flinch, thinking his number was finally up. But then another ten seconds pass, and another ten, and another, all riddled with nervous shakes. By the time a minute has passed, the man is sure it’s been at least an hour but still dares not move. Slowly, ever so slowly, the tension in his back, primal muscle memory of once-raised hackles, fades with his crashing adrenaline, and he falls asleep in a churning panic.

By the time the moon sets, the creature that was pursuing him slinks away, each step resounding with a metallic clink off the pavement. A target frozen in fear is no good for its needs.

At the same time, in a pigsty of a room across town, a certain digital occultist inputs data with quivering franticity. Alistair Macabre (or DenpaDante219, depending on who you ask) had just broken the surface of a moe pool they were drowning in to aid the Wild Hunt, a group tracking abnormalities across this city. Alistair had been tracking this specific anomaly, known colloquially as the Steely Manticore, and had been for their entire time running in occult circles. It is here that our story proper begins.