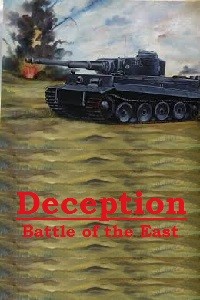 It didn’t take us too long until we reached the town. Once we were in Sachson, we immediately searched for the radio station. I actually never knew there was a radio station Sachson, I was quite surprised when we found it near the hospital; I never took notice of it. At the entrance, Tinroy is trying to persuade the staff to allow us to use the radio, but I think we were too late.

Startled. “Did you hear that?” (Leanner)

The microphone at the top of the building started to sound. It was like a siren and the moment that sound reached someone’s ear, panic showed up.

It was chaotic; everyone is running in panic, in packs swarming the southwest gate. Before long, I saw a Mark IV Panzer moved into town. It’s the divisions; they’ve been pushed back. As the remaining townspeople left, more soldiers moved in of which one of them approached us.

“What unit are all of you in?” (Soldier)

“We’re part of the 17th Utility Regiment of the 8th Panzer Division. We had an outpost southeast of Sachson but it was overrun by an armored platoon of the 51st Tank Army.” (Tinroy)

He salutes us as we return the salute. “I’m Staff Sergeant Reiner of the 49th Motorized Infantry Regiment. The Russian forces had suddenly increased their ranks pushing our forces back from the northeast hills. Did you say you were from the 17th Utility Regiment?” (S. Sgt. Reiner)

“We had received radio contact from Corporal Anavel and thanks to her we were able to call for air support to delay the Russians’ advance.” (S. Sgt. Reiner)

“Don’t worry; she’s with us along with another comrade by name of Kimpfer. She caught in a firefight and our men brought her with us to safety.” Looks over his right shoulder towards the entrance gate. “Speaking of the devil.” Turns back to us. “Our supply convoy is up ahead, go on and grab yourselves some equipment; we need everyone in this fight.” (S. Sgt. Reiner)

”Yes sir!” we responded together.

As Reiner turns around to regroup with the main force, we approached one of the Opel trucks filled with boxes and crates to equip ourselves. I grabbed a Kar 98K and a few clips each holding five rounds along with a few stick grenades. Once ready, we too joined the main force. While passing through in between our trucks and tanks, Reiner stopped us on the way to the frontline.

“Alright listen up. The 31st Armored Platoon is holding off the 51st Tank Army’s advance, but they won’t last long. We need to call in support from our artillery. Here (hands us a piece of paper) deliver these coordinates to the 2nd Artillery Platoon and they take it from there. The platoon is currently three kilometers north of the town. You’re going to need to hurry before the frontlines are overrun by the Russians. Good luck.” (S. Sgt. Reiner)

“Second Lieutenant Bosch. You must be the messengers with the coordinates, yes?” (2nd Lt. Bosch)

“Affirmative.” Taking out the paper. “The coordinates, sir” (Tinroy)

Takes the paper and reads it. “Vickers!” A comrade approaches Bosch. “Bring this to the artillery teams and commence firing immediately.” (2nd Lt. Bosch)

“We’ve lost radio contact with the main force and ever since, we had been waiting for the coordinates to direct our guns. And now, the Russians will have it. I’d like to —“ (2nd Lt. Bosch)

“The Russian forces are increasing their strength. A number of T-34 tanks had appeared and are breaking through our defenses.” (Soldier)

“We’re outgunned by approximately two to one.” (Soldier)

“Dammit. They won’t be able to hold off much longer......send the message: Pull the first and second lines of defense back to the last line of defense. We need to delay the enemy as long as possible until we can secure the artillery.” (2nd Lt. Bosch)

Turns towards the coordination team. “Beck!” Another comrade approaches Bosch. “Send the order down to Vickers and the artillery teams: Disengage and retreat to the west. All long range artillery move first, anti-tank guns move last. Go on, hurry.” (2nd Lt. Bosch)

He nods his head and runs down with the message to the artillery teams. Bosch then turns back to us.

“I’m going to need you to return to the main force and deliver the message: the 2nd Artillery Platoon would need to relocate and the artillery support would need to be halted. We would wait for the next set of coordinates after relocation is complete.” (2nd Lt. Bosch)

Bosch quickly heads back into the team to assist the platoon’s fall back as he finished his last words. We, with the new message at our hands, also began to mobilize and return to the main force. Our return to the main force however, would be delayed as the route back is now a battlefield. As said by Bosch earlier, the first and second lines of defense would be falling back and merging with the last line of defense. Our way back is through the trenches dug for the defense stretching about a kilometer long and five feet deep. There were still soldiers falling back to the trench and pursuing them were T-34 tanks. Making haste, Tinroy moved first and the rest followed. Moving quickly, we managed to make it through half of the trench before the firefight started. I was following behind Leanner and behind me was Anna. It becoming increasingly difficult once the firefight began; we started become distanced away by all the gunfire and explosions thrown at us; I was soon separated from the group. “Leanner? . . . Anna? . . . Isabel?” I shouted hoping to get a response, but it had only proved that I was separated. Lost and afraid, I attempted to continue to move through the trench, but I was brought down by a distant explosion. My mouth opened wide as if I was to shout, but the sound was trapped within me internally as I was reminded of my wound. Slowly trying to get up, I grabbed my chest trying to suppress the pain inside me. Almost standing, I was brought back down by comrade.

Not noticing my surroundings, I would’ve been shredded by machine gun fire if I had raised myself another centimeter. On the ground I shook my head, trying to rid the blurred vision I had as I lifted myself up. Still feeling the pain, I sat on the ground and leaned onto the dirt wall resting.

Shouting over the sound of gunfire and explosions. “You don’t like you’re from this unit. What are you doing here?” (Soldier)

Taking heavy breaths, I barely noticed him talking to me; I was too focused on the pain on my chest. With my hand still on my chest, I started to feel moisture.

Looks at my wound. “You’re bleeding!” Looks around. “We need a medic over here!” (Soldier)

He soon gave up shouting for a medic and left the scene to search for one instead. I caught a glimpse under my blurry vision of him trying to move away from his position. I soon closed my eyes to the world around me still trying to suppress the pain on my chest. The battle was becoming fiercer — I can tell even just by listening. The tanks must be very close by now; their engines are roaring quite loudly and the sound of bullets bouncing off their armor is also becoming more frequent. Very short moments have passed, but they felt insanely long. It was only a matter of minutes until he found a medic and brought her to me. As I opened my eyes again to see the medic, I found myself surprised; the medic was Anna.

Being able to her again was a relief; I guess I’m not alone after all. As she kneels down to take a look at my wound, I let out a slight smile.

She took off her medical box and placed on the ground to obtain some supplies. As she began to perform her first-aid, the pain had become more unbearable. My eyes shut rapidly; I held my breath as the pain got to me. It was going through every door: my chest, my ears, my mouth, my nose, and my eyes, they soon fell before him; it was too overwhelming. Before had I been taken away by him, the last I heard was Anna......