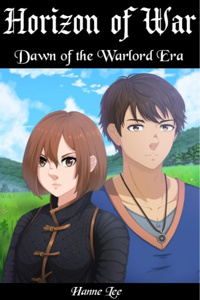 A foreigner got thrown into a medieval paradise with lush green meadows as far as the eyes can see. War thrust him to lead a band of misfits. The man, Lansius, doesn't come from riches and has no superpower.

Suffering from amnesia and yet to make peace with his past life, he vowed to protect his family, but he’s nothing more than a pawn, an expandable henchman to do his master’s biddings.

An epiphany comes that there are only two viable choices: Either let the chain of servitude tighten around his family or risk it all to become part of the ruling class even when it means shedding innocent blood. Using only his vague understanding of the art of war, Lansius resolved to fight.

Formatting needs a bit of work

Reviewed at: Chapter 3 : Eight Years Prior

This story ain't too bad. Gives a good focus on the character, explains how he came to his current goals, and actually shows him reacting in a way that doesn't make me want to slap him. I am sad to say this is not a regular occurrence. Good on the author for that. Other than a slightly issue with paragraphs not having a more varied size through the chapters, I can't see much wrong with this story. 5/5

Reviewed at: Chapter 3 : Eight Years Prior

A solid story even if the core premise follows the standard isekai affair. Lans is a typical young office worker transported to a fantasy land against his will. Where the story gets its identity is through the battles. Tactics and armies make up the meat of the action.

There is a lot of shifting in POV, from third person for one character then first person for the protagnoist, but the sections are labelled as to not confuse the reader. The prose is a bit simple but it does make for an easy reading experience.

No grammar mistakes to be found from what I've read.

Ha! I like that Lans's Big Secret is simple multiplication!

And his concern for his adopted family is a strong motivator, and makes him immediately sympathetic.

His internal monologue about sneakers vs. medieval shoes is a great way to orient us. I like the 'he got zapped to a fantasy world, but we start two years in.' It's a refreshing change from a character immediately waking up in a new world.

I see that English is the author's native language. Considering that, this is hugely impressive! There are some rough patches, but I wouldn't have known. But also considering that … I'm going to pick on a few areas that I think are easy fixes.

Someone called my name.

[We don't need the second sentence. I had a teacher once who cautioned against telling readers what you just told them, even if it's like, "I hate you!" she shouted angrily. Yeah, I figured it was 'angrily' because of her words, and that she's shouting!)

'Female' instead of 'girl' or 'woman' (in this case, probably 'young woman?')  makes me wonder at her species.

But the two big things (which are related), are:

1) I'd be sure to include speech tags on the same line as the dialogue. So I'd change the text to, for example:

“Lans, you’re getting weak,” Marc taunted me from the well.

“Eh, no," I replied. "I’m not someone important. Just Lans is enough.”

"That is one concern, yes, " I admitted.

2) I'd break up short paragraphs (usually) so each one only has a single character's action. So instead of:

“But I can’t even write that well.”

I confessed and she smiled. [Both characters have actions here]

“Lans, you should trust your ability more…

[I'd go with the following:]

“But I can’t even write that well,” I confessed

She smiled. “Lans, you should trust your ability more…

The story itself is grabby. Lans is sympathetic, and identifiable. If I were zapped to a fantasy world, doing simple mental math would be my magic power, too!

Reviewed at: Chapter 5 : Fog of Famine

So after reading chapters one through five here are my thoughts.

grammar: amazing, it is refined, kind of like if it was a written report of the events by a person of nobility. The way it is written paints a clear picture in my head, and allows me to understand what is going on. It plays like a movie, bravo.

action: using real war tactics? Sign me up. The action is chaotic but organized like a real battle is. Nice job with the perspectives of both sides of the battle, it helped keep me at the edge of the seat.

characters: there is a lot of characters introduced in the beginning, so it was a bit hard to find the most important ones. Thankfully the good writing cleared it up in the later chapters. Main character is a strategy gamer, props to that.

story: very fast paced, but I like it that way, a rice field doesn't grow over night. There are things characters mentioned that sparked my curiosity, and made me hope to find out more in the later chapters.

Aditional thoughts: the maps were awesome and help me understand the layout of the land, also I'm a lore hound, who loves knowing background knowledge of the story.

tl:dr: if you like medieval combat and tactics, this is the book for you. The grammar is so good I don't believe English is not the author's first language. Story is fast, but interesting. Give it a try

A bit of jankiness cannot hid a very solid setting

Reviewed at: Chapter 5 : Fog of Famine

Read a lot and you'll learn to appreciate a well thought story. This is one of them. By reading a chapter or two of this fiction, you'll sense that considerable time had been invested by author researching subject matter. Wherever the characters might bring you, you can rest easy they walk on a solid ground. That is what I feel. The time spent reading all currently available chapters has been pleasurable.

That said, some aspects are still less than stellar. So here's feedback for author.

Dialogues are sometimes unclear. When readers are not yet familiar with the characters, it is unwise to tackle conversation between more than two people. I often stop mid reading to identify which character said the line I just read.

Tendency to explain the detail also need to be curbed. Who cares if the entity in front of you is a demigod or an angel. What's important is it made somebody scared shitless. Irrelevant detail is irrelevant.

The change of characters' state-of-being would also need a bit refining. I appreciate the brevity you employ in characters introduction, but some scenes need more than a little time. Transformation from confusion to fright, from curious to stressed to relieved, sometimes deserve a whole passage.

Those are rough edges I can identify so far. Keep writing, and you'll smooth them out in no time.

Based on synopsis, and on what author told me about the story, this novels sells itself on the fact we have isekai'd protagonist without any power. Which is technically truth. But an idea of struggle is immediatelly turned meaningless in a very first few chapters as by that point, protagonist is already accomplished commander in the fantasy army. Which is, I assume from context, is the position reserved for nobility.

I gave up on story immediately. No proper introduction, no struggle in forgein world, I can't care for the war because I don't care about the protagonist. Why advertise story as protagonist being powerless when you never show him powerless? He didn't start from nothing, because story didn't show him starting from nothing. He is already succesful when story starts.

Not to mention there isn't much effort put into storytelling either, it's not like author describes us the perils of the war and how horrible it is, there are just few simple lines of dialogue. I feel cheated out.