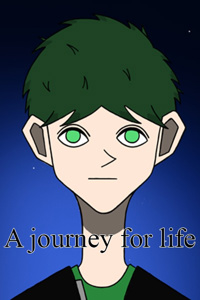 A journey for Life

Remove Ads
Previous Chapter
Next Chapter
A note from NovelFr3ak

That’s the sound that going through the room right now

While I’m silently sitting across him at the kitchen table the mid 20 looking man with brown hair, a black hoodie and blue jeans stops eating and looks up at me

He starts to think for a second and he suddenly gives me gives me a face that tells me that he just came up with a great idea.

Never thought about that

I don’t think he could do that but that certainly would have been something I should have thought about, I could have brought Anna in danger.

But he’s not wrong, I didn’t plan enough for this journey and didn’t reserve a hotel room ahead.

It’s vacation season and all the Hotels are booked so after relentlessly trying to find a hotel I had to walk around the Streets of Sion, Switzerland with Anna at Night without any destination.

‘’well don’t worry about it, it’s kinda a hobby of mine to help stranded kids for a few days.’’ ‘’so what are you two doing in Sion?’’

After a long silence of mine I finally speak up

‘’we’re road tripping from Germany to Rome but it looks like we didn’t plan well enough and now all the hotels are booked.’’

The man laughs a bit ‘’hahahahaha’’ ‘’rookie mistake, well you’re lucky, I normally live In Bern but I’m staying in this appartement for a few days so as long as I’m here you can stay with me.’’

I give the man a small smile ‘’thanks’’

but then the man asks me a question, a question I hoped he wouldn’t ask me, something that could lead to a very difficult situation.

Can I do anything but lie, I can’t tell him the truth, something so supernatural I’d have to put on a tined foiled hat to explain it to him.

‘’…’’ ‘’we’ve been walking for a few days and she’s pretty tired, I don’t think she will be waking up anytime soon.’’

I hope he didn’t see through my lie, it would be best if I could stay here for at least the night.

as soon as the Levin wants to say something his phone starts to ring.

He leaves the table for a bit

What happened in the few minutes he went away, those eyes, those weren’t welcoming eyes

But the atmosphere changes completely when Levi speaks up again

How does he know?

Why does he know?

‘’I just got a call from someone explaining your situation’’ ‘’well, I probably got another story than you think but I figured out the truth with some of the information I got while you were here so you got lucky I guess’’

All I’m trying to is save her!

‘’well you got a girl there who’s in a neutral state, a witch can only reach a neutral state when they are in critical conditions, so when you connect the dots you will reach that connection pretty fast.’’ ‘’but the way you handled that girl, it was like she was an angel, certainly not the way someone almost killed another would handle it.’’

‘’and the rest of what I’m saying is all theory so correct me if I’m wrong but the way that girl reached her neutral state, your body did it without your consent didn’t it?’’

‘’I see so some people still have that Instinct ingrained in their body huh?’’

Instinct? What does he mean?

‘’back in the days when a lot more witches roamed around the world, humans and witches were basically in constant warfare that went on for thousands of years and after all of those years of fighting and hatred the instinct of humans evolved into something new, complete and utter hatred for witches but after a certain event in history that takes waaaay too long to explain the number of witches lowered immensely and humans started forgetting about witches resulting in the eventual devolution of humanities instinct.’’

‘’but it looks like there are still some humans remaining with that instinct ingrained into them.’’

The man gives me a smile ‘’so in short, you got reaaally unlucky..’’

But I can’t be down here

This information can’t slow me down, even for a second

Because If I want to save Anna I can’t be down for even a second, I need to give 100%, I need to be only focused on getting stronger and getting that apple.

Levin starts to think for a second and suddenly

‘’A girl in neutral state.’’ ‘’a boy who treats her like an angel and most probably wants to save her.’’ ‘’their destination is Rome.’’ ‘’trained by the ice witch Rhea’’

‘’hahahahahaha’’ ‘’I see so it actually exists, the rumours are true’’

Levin starts walking up to me

He starts slapping my back and gives me a big smile ‘’hahahhahaa’’ ‘’well boy you have a long journey ahead of you and from what I heard you’re quite strong so maybe you could actually reach the tree.’’

‘’well kid’’ ‘’you got lucky meeting me before I knew all of this, otherwise I would have probably tried fighting without even trying to start a conversation and actually reach the truth.’’

And a mystical aura surrounding her

She isn’t normal, is she even human?

And suddenly the woman looks at me

Levin looks at her and puts a hand to his head

Levin looks at me with a annoyed expression

He gives me a big sigh

‘’well, you’re probably a bit confused at the random mystical looking lady that just walked into my house.’’

‘’she is what you would call a fairy’’

this one took a bit long but I was kinda doing anything but writing for the last few weeks :p