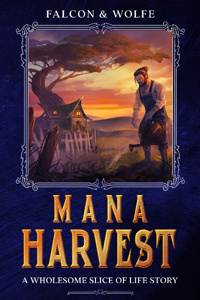 ★★Mana Harvest★★
A Wholesome Slice of Life LitRPG
Volume I of the Sword to Ploughshares Saga
◆◆◆◆◆◆◆◆◆◆◆◆◆◆◆◆◆◆◆◆◆
For the last 20 years Cid has served the realm as a city guard.
One thing has driven him forward.
His eventual pension and what he plans to do with it.
A purchase.
Specifically in the village of Haven and the plot of land he's been eyeing to buy.
After a lifetime of fights and scuffles, its time for something new.
Time to be...
A farmer

For fans of LitRPG, Slice of Life, Resource Management, and Turnips.

Solid, but tags are not accurate

The story seems to be rather good, though the tag "Reincarnation" isn't accurate as of the current chapter, unless the story goes a completely different direction. Other than that, fine, much more heavily slice of life than any other genre, also, the main character is kind of a creep in his own head.

Great for a calm book

Reviewed at: Chapter 21: One Step At A Time

The book has a steady and calm story, no massive complaining or random jerks to throw it off beat.

Sure a bunch is practically given to the Mc but it's not very usable currently, along with giving a clear and obvious sign the future of the story has been thought about.

The town is nice with some well rounded characters and clear signs of many hidden backstories. Along with the Mc not making the best choice every time. Even asking for advice about something they wouldn't know about and then following the advice.

Im really looking forward to the calm story even if as the author stated there might be a wait for chapters. As long as they don't push or rush the story I can see it growing into quite the treat.

Reviewed at: Chapter 17: A Feast For Friends

what we have here is a very promising start for a farming litrpg that actually plans to do some farming instead of turning the farmer into an adventurer the first chance it gets.

the characters are genuine and likeable and the dialogue is believable.

I also very much like the idea of using magic as a tool to help on the farm. This way this book still scratches the magic itch!

I very much recommend you giving this story a try if you are up for some promising slice of life farming!

A fun slice of life story

Reviewed at: Chapter 21: One Step At A Time

I have been enjoying the story so far.  It is a basic slice of life style of story about a guard who literally buys the farm.  The characters and likable, although there hasn't been much opportunity for any of the side characters to develop yet.  The pace has been slow and steady so far.  I look forward to seeing where this story will go.

Cid up to Chapter 15

I tend to enjoy some wholesome slice of life books. I read the S Ranked and decided to give this story a try. I enjoyed getting into Cid's issues and struggles. I thought Oak Tree farm was a great twist and a good place to plant down roots. Pun intended. I did also like the fact not everything has been given to our hero and he must seek out his fortunes.

By chapter ten you can get the sense of where the story is going. Cid is having to adjust to his new life and I quickly turned the page eager to keep going.  Slow is smooth, smooth is fast applies here in and out of the story. Haven is a nice addition to tie into what Cid must deal with as he grows.

I do enjoy the character interacting with his enviroment. I haven't picked up many errors and I have found the pacing to be a page turner. The prose is great. I don't find myself bogged down in passive writing or confused by what is going one. I do find the writing to be fluid with a plotline that flows well enough to build upon itself. I will be following this story as it progresses in time and lenght. I have high hopes for it.

good read. what else need I say

well written with a good flow, story is well told and descriptive

Reviewed at: Chapter 18: The Next Morning

The short of it is that the story is very middle ground, in all ways it's neither horrible nor outstanding.

The writing is decent enough though there are quite a few grammatical mistakes and sporadic incorrectly used words but never to the degree that it is unpleasant to read, just quite noticeable.

Same for the system, it's pretty standard though with some minor interesting tweaks that give it just enough character to make it its own thing and not literal copy past from previous works.

The plot itself is once again standard as all hell but executed well enough for now to be worth reading through.

The weakest part of the novel in my opinion is the setting there was clearly very little thought invested into it beyond just copying some bog standard Japanese novel cliche and just like those novels it suffers from the usual drawbacks: phrases that have no place in a medieval society, modern sensebilities transplanted into this fantasy medieval society with no thought of how it would work there and etc.

All in all, give it a try but don't expect anything ground breaking.

Reviewed at: Chapter 25: A Man and His Horse

Title says it all. As of chapter 25, there is no action, adventure, or reincarnation. The world's interesting, the characters are believable, the grammar is solid. But so far it's literally all about repairing an abandoned farmland. Which is fine, unless you were expecting a little bit of action, adventure, or reincarnation. I thought this would be a farmer on the frontier, but that is not the case.

Reviewed at: Chapter 23: One of Us

Firstly, the author keeps advertising their other story outside the authors notes, this artificially inflates the word count by at least 10%.

Furthermore, the chapter length is rather short, something I personally do not like.

Lastly, the characters are ok too, however, the quest system also determines character relationships which is super weird and gives me the feeling that we don't have a casual MC but THE MC TM if you know what I mean.

So all in all, it is a good story for a binge, but I don't think I can recommend it as a story to regularly keep up with (chapters are just to short to get any real enjoyment out of them 2-3 minute read time)

Note: Rating is based on how enjoyable I find the story, opinions may differ.

The story is a (so far) slow paced slice of life about a guard starting a farm. The character itself is kinda nice, he gives off a decent hard-working but kind of layed back vibe as well. The grammar is not hindering too much either, although there are some sentences at the start that feel a bit off with the author mixing exposition and thoughts of the main character.

What is bugging me enough to give up the story is the system interface. I honestly think this would be a much better story if it wasn't present. The system feels very gamey, and given that this is not a VR story it just feels off. What exactly does +1 reputation with the town mean? Why is nearly every interaction giving a quest, except arguably the most important ones at the start? Where are these rewards suddenly coming from? Maybe this comes into play later, but to me it feels off, and doesn't allow me to immerse.