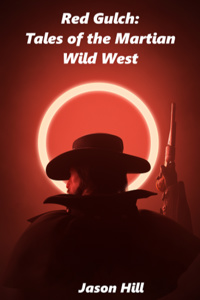 Red Gulch is a small mining and cattle town that has its issues just like Dodge City, Tombstone, Deadwood, Sante Fe, and Virginia City did. The crimes are the same: murder, assault, robbery, and cattle rustling. The only difference between Red Gulch and its forebears is the time and place. For Red Gulch is located on Mars hundreds of years in the future.

Mars has long been terraformed, though the red soil remains. Mars Co controls Mars and does not allow most modern high technology anywhere on the planet except the planetary capital, Olympus Mons. Guns(lasers), medical equipment, some practical items(food, bidets) and the nanotech system it created are the sole exceptions. Travel is restricted to horse. The nanotech allows for skills that humans would not have otherwise as well as a user interface and HUD.

Red Gulch is a collection of stories featuring interconnected characters. Stories can range from mining, stagecoach robbery, bank robbery, gambling, and anything else that occured during the old west. Most characters will be original. Some characters will be based off historic figures such as Bass Reeves and Tom Horn.

There is some profanity and what some may consider gore, so those warnings apply.