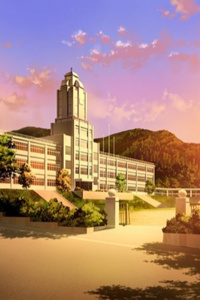 There had been no more thunder booming anymore but the rain still in downfall outside. The movie he selected is called Shinning which the author was Steven King. I had not much interest in this kind of movie, actually, but I still spent time with him shaking by its plot. However, I got bored with time passed and fell into nap eventually.

I had no idea how long I had been in sleeping. By the time I got aware of myself again I found that I was lying on his legs and Carey was staring at his mobile phone, with television already shut down.

I just kept my gesture and didn’t make a motion. I could smell the scent of shower gel from his body which makes me much relaxed. For what I even wanted to pretend sleeping, I could not image. I sensed a conversion of our relationship but I dared not to figure it out what it was.

In a flash back a series of experience with him spouted from my memory. As a matter of fact we knew each other for only a short time but I really regarded it as some friendship set up long, long ago. He and I had lots of in common (except taste on movie, of course). We helped each other on school work. He was good at math and I literature. I was dragged into sports by his effort. I still remembered that when I watched him playing basketball in team matches sometimes. His vigorous and graceful stature would have always attracted loads of scream from many teenage girls. Moreover, this situation brought some troubles to him as well like I witnessed that with Jason’s fellows.

“What…time is it?” I wiped my eyes and looked outside the windows.

I must repeat it again and again that I could never image that we lie on the same bed to sleep. Due to some complex emotion and sleeping that I had had just now I got insomnia on the early several hours while lying on bed stiffly and what stirred me badly later was that he hugged me in half an embrace. Thus I could not move in order not to wake him up. Blood running circling around within my body seemed more slowly than ever. I kept an uncomfortable posture for a long time and fell asleep at last nobody would tell exactly when.

I got rapidly up in the morning while he was still in mild snore. I could not tell why I escaped from his home so clumsily and sent him a massage to remind him that I went home for some preparation for departure to school. That’s obviously fake my information left. My mind had already fallen into chaos when I got rid of his sort of tightly hooped arms!

The sky in which had been swept up by storm yesterday now shined bright marvelously with purity but it did not help make out my entangled thought. Air fresh entering and rambling around body which makes everyone walking on the roads delightful did not hold a upset guy’s pace towards his home in a staggered manner.

I didn’t remember how Carey and I went to school later. What I kept in mind was that from that day on here stung a bodiless barrier between us and in other word, he began to avoid me.

He started to push off my invitation and often tried not to be face to face with me. I wondered why and even was able to be in his way and asked for a clear and persuadable answer but some kind of resistance invisible in my heart forced me to put down this thought. I browsed my stock of message between us and found that the latest pieces contained only my invitation and his rejection. I reckoned that our relationship would not be ended like this and I must ask him for a thoughtful chat.

After a considerable resolution with statements I contrived I messaged him to meet at the central park where we had had body training. It was beyond my estimation that he accepted it after a while.

Carey was my only “special” friend at school who brought me much unforgettable memory. I could hardly make it out how our attraction to each other kept incessant. But something urgent must be explained open-heartedly, that was what I was thinking during walking on the way.

There were still some people hanging out in the park and the weather good enough but nothing would cheer me up anymore if I didn’t unscrew the awful pins to loosen the tightened knot in our connection.

He appeared at last after my long waiting on a swing. I for some moment thought that he would not come for change of mind.

He stared at me, and so did I to him, both of us speechlessly.

“Come to have a seat, dude.” I mumbled with head lowered.

He did as I said silently, another unbearable quietness except voice fluttering surrounded.

I again broke the embarrassment. “Why avoid me, dude. Did I do something wrong? You didn’t meet me by lots of excuses. It made me very upset and anxious. ”

It looked as if he was still fighting against something in mind so I continued to say: “I’ve remembered you’d said that we were friends. So please tell me why! Or it doesn’t make any sense.” My tone grew a little higher due to my agitation.

Later I noticed his sort of reddened face and I knew he was ready to reply.

“I just need some space to put my thought in order…”

“Listen, dude, I am here to be the one you can talk to, If there is some misunderstanding between us, I hope you can put it up and we can deal with.” I got up and stepped close to him. “I am glad that you come, would you tell what happened?” That’s him who told me that I had been so gentle while saying so, a gentleness I had never showed before. And also it brought courage to him to declare what was stuck in his mind straightforwardly.

“You are my best friend, Carey, and there will be nothing that makes me hate you, only if…” I hesitated and said: “You’ve revealed my secret to others?”

“You dated with my girl…wait I am a single one…” Even at a moment like this I still could not help showing off my sense of humor, though, make the condition more awkward.

“I was feeling stressful lately for some reason, I always got nervous and…”

“Oh! For god’s sake! I mean that I should have liked you!”

“Hah? I…” I spoke subconsciously and no one would know what a boomer exploded in my mind. “I like you as well, for we are best friends, aren’t we? How come two men becoming friends supposed not to like each other?”

“Not that kind of likeness!” He said or even shouted. “I want to be with you! A romance love, you know! I kept this weird feeling for a long time and that’s why I need to leave a distance between us.” He lowered his head again and seemed like to be waiting for my adjudication.

I could find no words to describe how I was shocked at that moment by hearing such a brave announcement from a gorgeous boy who used to be called “Ruffian”. How should I call this condition, some kind of bidirectional secret love? And furthermore what the hell should I react now! Hug him as firmly as I could or say some nonsense to expression my amazement?

“Thought about you spinning in my head nearly drove me crazy, man! I could not stand it anymore. I’m sorry Rory to make you disgusted in such a way and in my opinion we better keep a distance from now on.” He stood up from seat brusquely and was about leaving.

I dragged his hand behind instantly and held it tightly. Nothing would stop me and some fragile boundary obstructing in the way to him for me must be broken immediately. Thanks to you, dude, you were the more courageous one who pushed me forward to face my real inclination.