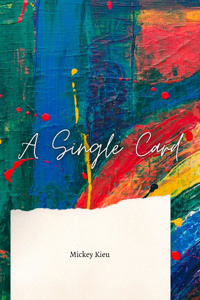 Jed showered and the clothes were put into the washer-and-drier Card. They were a rather tragic sight, newly bought but just as quickly dirtied, with black and grey spots all over.

After they finished dinner—today was a takeout sort of day—Jed and Noah sat back down on the couch. A little music. The lights of the snow outside were so beautiful against the backdrop of the fireplace.

Jed was outside letting some of the July snow wash through his palm where his Card was now located.

[Sorry, we finished dinner without you. You didn’t ask though, so we aren’t to blame, hehe.] Jed thought.

[I don’t need that. I already had my fill of Spirit when you were trying to use that to put out the grime.]

“Here, drink this,” he said when Jed finally sat down again.

“What is it?” Jed was curious about the vial that seemed to be blue-coloured. It looked tempting, but at the same time sacred, almost as if it held an entire ocean inside.

“This is one of the best potions in the market for new Manifestors. An energy potion.” Noah said, his chest puffed out.

“Where’d you get this, Father?”

Jed wanted to say something, but in the end that was what ended up happening.

[Amelia, what is this? I can see Spirit energy bubbling in this vial with my [Eyes of the Seer].] Jed thought while joking around with his father.

[How do I put this nicely? It’s a little trick for containing some meagre amount of Spirit energy. There’s approximately 10 units of it in there.] Amelia was trying, really.

[Yes. This wouldn’t be anything at all.] If Jed could see her eyes, he’d know how violently they were rolling up and down right then.

And then he gulped down the potion right there. A sudden swirl of Spirit energy seemed to have passed through him. [Comfortable—ah!]

[You might want to check your clothes again.] Amelia spat. She wasn’t happy that he forgot—again!—about her.

[Sorry! I forgot. . . .] Jed didn’t finish his thought before, well, the smell came again. [Would it ever stop?] He almost cried.

[Yes. After you’ve got to Three of Spades, then it will. And it’ll only happen every time you’ve accumulated ten units.] Then Amelia’s voice turned almost siren-like, [Y’know, if you’d let some of that energy go to me. . . .]

Another shower it was then.

He did notice something strange, though, when he thought about his stats again. The first thing, of course, was that the stats actually showed up on his Card. The second was the Spirit capacity that was a little strange.

Nothing but the Spirit capacity changed, but this wasn’t the way he learned it at school. Spirit capacity was supposed to be measurable by Evolution level, such that this capacity could only be increased by a lucky encounter—fruits, to be specific, that are picked off some old trees, or some kind of pills that were essentially enhancement drugs. Alchemists didn’t exist on this planet, hence the supposed “rarity” of pills. Vials of potion could be made by scientists, and in fact, most were, but pills were another deal altogether. One was chemical, the other, well, magical. Literally: with magic-type Cards.

[What happened to my capacity, old Ame?] Jed had been trying to find a good nickname for her throughout his shower. The reason was, he found it embarrassing to ask if she could see him naked, so to cover the awkwardness, he did what had to be done: piss her off.

[Fine. Your Spirit capacity is a little special, mainly because of the sub-world you have. It’s one of the functions that are not explicit. You’ll be able to store more Spirit than—about twice as much as—normal people.] Amelia suddenly seemed patient.

[Yes, twice, you twit. That’s the maximum capacity your world can hold for now.] Amelia said. [There should be Cards that do the same, though, so you’re not special. Don’t convince yourself otherwise.]

[I’ve always been special!] Jed said. [So what does that mean for me?]

[It means that, for better or for worse, you won’t be able to level up naturally until you’ve filled your world. See the 100 Revolutions required? That only counts the number of Revolutions that go completely to expanding your Spirit capacity. So if you want to regain energy, or if you want to give me energy . . . too bad, soldier.]

[Why is it 6 Revolutions completed now?] Jed sort of knew the answer, but wanted to check.

[The good thing about the vial is that you gained 10 Spirit capacity—which counts as 5 Revolutions. The bad thing is that the energy wasn’t pure enough, so you’ll have to Revolve once for every such vial to force out the impure energy, so your next Revolution counts for nothing. Also, each vial eats up 2 of your endurance, so you need to rest, or to get a technique that’ll help you rest in a shorter period of time.]

[Got it. So I can keep chugging potions, is that what you mean?] Jed was somewhat honest.

[Nah-ah. The number of potions you can chug seems, for some reason, to correlate to your luck. So don’t drink too much, or you’ll drain your luck. Maybe it’ll even go negative. At that point . . . if you are walking outside and it happens to rain . . .]

To Jed, the next-door neighbour’s voice of Amelia sounded somehow like a bolt of lightning. Shivers ran down his spine.