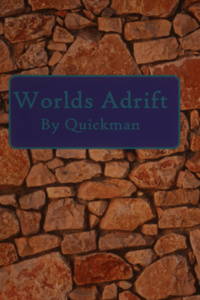 An infinite void with the pieces of dead worlds littered in every direction. That is what the Rift is. Kain will become another traveler in this void, looking for his way back home. Along the way, however, he will find plenty of stories to tell.

Arc 1: The Dragonoid Tower- Finding himself in a strange void with a hazy blue sky and floating islands abound, Kain will make new discoveries, new insights, and a new ally.

Arc 2: Soul City- After a life or death battle with a ravenous beast, Kain and his ally will find himself in the ruins of an unfamiliar city with a familiar name. Picking through the remains and fighting against the denizens of the ruin, they will discover new secrets of Ether, the energy that floods the void they live in.

Arc 3: People of Power- Barely escaping with their lives, the extradimensionals will find themselves stranded in an unfamilar world and an unfamilar city. Through sheer luck, they will learn about this new world and discover what it truly means to be an extradimensional. While they do so, powers both hidden and seen will move, driving the city closer and closer to the brink of anarchy.

(This is my first time publishing a web novel, so please enjoy the learning process and point out any shortcomings. Thanks!)

(A helpful commentor mentioned that there is a game with the same name and concept as this novel. I did not know that such a game existed when I wrote this story and I apologize to anyone confused)

I gave two stars for the story because I'm sure it's at least that good. It's in there somewhere. Stories are like dinosaur fossils. If they are buried too deeply, it's just a rock.

Grammar seems to be above average.

Characters may exist. It was hard to tell though. In the first paragraph a character should make a major choice. A lot of the first chapter should explain why that choice is important and should leave some doubt as to whether the character's decision was for the best.

Rewrite from the beginning. You gotta show the main character in a light that immediately grabs the reader.

First chapter should be skipped altogether. Maybe meet out the information contained there in over time as it applies.

Second chapter needs teeth. It's got no hook.

"Well begun is halfway done" does not apply to this story. Make a splash in the beginning, then just ride the wave of the first arc.