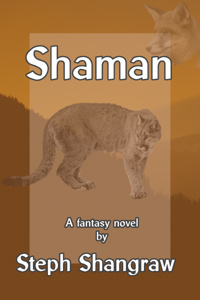 At the crest of a tall hill, they paused to give the donkeys a brief rest.

Dayr eyed the sprawling complex of stone buildings below, and the thousands of people moving between them in no readily discernible pattern. “How are we supposed to find one person who might or might not be here?”

Vixen smiled at his tone, though she was shivering with apprehension. What if someone recognized her? She'd need to speak to whoever was Dean; what if it were the same one she'd known as Corin? She winced inwardly from the thought of facing him as a woman, shorn of the fragile protection of maleness and her father's name. “We go to the tall building with the clock-tower and ask.”

Dayr glanced at her. “Ah. Do you want me to go? You could wait here.”

She took a deep breath to steady herself, and shook her head firmly. “Thanks, but I can do this.” I hope.

They rode down to the campus, ignoring the curious looks in their direction, and halted in front of the clock-tower.

“This may take some time,” Vixen warned, as she dismounted.

Dayr shrugged and sat down on the broad shallow stairs, holding the reins of both jennies. “The sun's warm. We'll be fine, however long it takes.” Dove nuzzled him, and he stroked her nose.

Vixen collected herself, climbed the half-dozen stairs, and opened the great wooden door.

She stepped into a large room, richly tapestried, sunlight streaming through many glazed windows. A wide stone stairway led up to a balcony, and a stone archway to one side allowed a glimpse of a long corridor beyond. A man, fairly young, scholar-pale, with mousy-brown hair, staffed a wooden desk near the stairs.

“Excuse me.” Her voice had never been excessively deep, and she'd both deliberately worked at lightening it and inadvertently picked up the inflections of a shyani woman; she doubted it would betray her.

He looked up from a book. “Yes, mistress?”

“I'm trying to find someone. I understand he studies here, or at least he did eight years ago. Could you tell me how to find out whether he's still here?”

The man blinked, his expression faintly startled. Clearly, he'd expected a woman dressed like a commoner to be awed and diffident, not direct and at least outwardly confident. He would simply have to cope with it: she refused to act like a helpless fool.

“I... of course, milady. Please, make yourself comfortable,” he indicated a cushioned bench nearby. “I'll ask the Dean whether he's free to see you. I'll be just a moment.”

“Thank you.” She sat down and composed herself to wait, while he hastened off through the archway. Interesting how commoner 'mistress' had become highborn 'milady'.

He returned promptly. “Dean Hadley is with someone at present, but he'll see you as soon as he's available.”

“Thank you,” she repeated. Hadley. She quailed inside, tried not to show it. It would have been too much to ask of the world that the post might now be held by someone new.

Other women had sat here, gazing at these same tapestries, waiting to be called in to see Dean Hadley. Whispers ran around the University that female students sometimes passed suddenly and unexpectedly after spending a lot of time with the Dean. Whispers equally told of women who were expelled soon after a meeting with him.

Fixing her gaze on a knotwork pattern in the tapestry in front of her, she followed the line around and around, concentrating with all the force of a shaman's will. As she'd intended, it calmed her, made her feel centred again, steadied her mental defences against the echoes of emotions in this room. Thus, when a darker young man emerged from the archway and announced that the Dean was prepared to see her now, she rose unhurriedly.

The one who had been at the desk escorted her down the hall to a door and knocked.

“Come,” barked a baritone from within.

Her guide opened the door and ushered her in, then closed it, leaving her alone with the Dean.

As his gaze ran appraisingly along the length of her body, Vixen fought the urge to wrap her cloak around herself as protection from the look and whatever lay behind it. He was a fairly large man, his hair a slightly paler iron-grey than she recalled, as richly-clad as ever.

He gestured to a chair, and folded his hands on his big dark wooden desk.

“What can I do for you?” he asked coolly.

The receptionist had been easily impressed, but Hadley was another matter altogether. She weighed her pride against her mission, and decided.

She sat gracefully on the hard wooden chair, taking care that her cloak not hide her body. Decorously, she folded her hands in her lap and lowered her eyes.

“You're very kind, to take the time to speak to me,” she said softly.

“I understand there's someone you want to find?” he prompted.

“Yes. I haven't seen him in some time. I believe he studied here eight years ago.” She coloured her tone with respect for that accomplishment. “I need very much to speak with him.”

“Is he here?” she asked eagerly.

“Oh.” She raised her eyes just enough to give him a disappointed look, and leaned forward entreatingly, allowing him an 'accidental' view of her cleavage, though it made her feel fouled. “Could you tell me where he is? It's very important.” He could so easily balk, stand by the rules and refuse to tell her, if he even knew at all.

The Dean's eyes lingered on her chest, and the glimpse offered by the loose laces of her blouse and the support of the tight bodice. “I'm not permitted to divulge that information. I could offer you one of my students, to write down your message for you, and have it delivered to him.”

She sighed, and sat back, twining one end of her blouse's lacing around a finger. “That's a very generous offer, but I'm afraid I really must speak with him personally. Of course, you mustn't go against the rules here.” Biting her lip, she drew her cloak around her and started to rise.

Vixen reseated herself, let her cloak fall open to either side. “You said...”

“I know what I said. It is, however, among my prerogatives to make an exception in a case involving extraordinary circumstances.”

Feeling unclean, she feigned a lack of comprehension.

“I can tell you if it's important enough,” he explained. “What message do you take him?”

“Hmm.” He looked unsatisfied; she wondered whether she should invent something. A direct lie was no less honest than her pretence of humility. He leaned back in his great carved chair, expression thoughtful. “That makes it difficult. Have you travelled far?”

“I think around a week,” she said truthfully.

“It certainly seems to me that your dedication indicates the seriousness of your mission.”

“It must be very important indeed.”

“It is...” She hesitated delicately. “It is a matter of old promises, and family, and something that must be done in person.”

“I see.” He laced his fingers together meditatively, looked up suddenly enough to catch her gaze directly; she dropped her eyes quickly, as any proper woman of the lowlands would. “Four years ago Jared returned home to his family's estates, to take over the Domain of Hyalin.”

That was quite genuinely startling. “Jared is Lord Hyalin?”

Given Jared's poor relations with his father and elder brother (what had happened to them both?) she hadn't expected to be journeying in that direction. “Oh. Um... could you tell me how to get there?” She had a general idea, but could hope for more specific directions.

The Dean sighed patiently. “Take the road south, and at the first crossroads turn west. Away from the highlands. At a lady's pace, it will take you four or five days to arrive. You really might consider sending a written message...”

Of which he would be sure to learn the contents. “Thank you, but I truly can't.” She flashed him her most charming, grateful smile as she stood. “If I have so far yet to travel, I'd best be on my way. I appreciate your generosity in allowing me to take up your valuable time. The University is surely fortunate to have you.” Now that she had what she needed, if she could only escape the campus unrecognized...

“Have any of your relatives ever studied here?”

“My relatives? I don't believe so.”

“Odd. You seem familiar.” Her heart almost stopped, but he only shrugged. “That comes from seeing so very many students pass through, I suppose. I wish you success in finding Hyalin.”

“Turn to the right outside my door, and you'll come to the front hall.”

She inclined her head deferentially, and departed, hugging her cloak tightly around her as soon as she was in the corridor.

Dayr looked up when she emerged. “Well?”

Without comment, he mounted his dun and led the way south.

“That old lecher thinks anything in skirts lives for men to stare at and patronize.”

“Then why act the way he expected?” Dayr asked, confused.

“Because he would probably have refused to answer me, otherwise. Technically, he broke rules by telling me.” She shrugged. “It worked, that's what matters.”

But the feeling of being somehow soiled persisted. When they camped that night by a stream, she scrubbed herself long and vigorously.